In the mountains high above Bogotá, the capital city of Colombia, a small group of believers meets each Sabbath. Up here the air is very cold, and many in this neighborhood live in poverty. The group is planting a church, wanting to offer hope in a community that experiences hardship.

Many residents make the long trip to Bogotá every day for work, and people move frequently, traveling wherever they can find employment. Others salvage what they can, usually scraps of cloth to sell. Many women work as housekeepers or nannies for wealthier families in the city.

Given this constant state of change and high level of need, the Adventist small group follows Christ’s method* to connect with the community. They started by getting to know people and making friends. Luis Mario, the group leader, lives nearby. He understands the people and is able to minister to their needs. Often, the believers go door to door, offering food and clothing when they’re able. “Working with the community is the best thing,” he says. “The people are needing God and they listen. They are thirsty for the Word of God.”

This project, known as Monte de los Olivos (Mount of Olives), was started by 5 Adventists in 2016; in 2017, the group grew with the addition of 12 new baptized members, plus a few dozen visitors. Toward the end of 2018, almost 20 additional people, some of whom were youth, were studying the Bible regularly, with several more planning to be baptized.

Hope for the Hopeless

God has used this committed group of believers to bring hope to this mountain community. Luis Mario tells the story of Alex,† a young man who was going through a tough time. The believers were visiting Alex and his family when Alex shared that he planned to kill himself that very night. Motivated to act, the small group prayed earnestly with Alex and shared Bible promises with him. He decided not to go through with his plan then, and the group continued to encourage him regularly.

Alex was still dealing with the trauma he had sustained during military service, and he was angry a lot. Waves of depression sought to pull him under. But something about the hope offered spoke to him, and he eventually decided to be baptized. In the couple of years since, his outlook on life has improved. The depression has subsided, and he’s able to focus on his Savior. Although he and his wife are separated, they often take their adorable toddler to church on Sabbath.

Every few months, the district pastor, Jairo Rodriguez, helps arrange health fairs and evangelistic meetings. Pastor Jairo explains, “The people aren’t going to hear the spiritual message if you don’t take care of their physical needs first. . . . So, we tend to people’s pain and their needs, and then we’re able to tend to their spiritual needs.”

At the health fairs, community members can get haircuts, massages, and basic medical and dental care. There are also seminars on natural remedies and mental health. 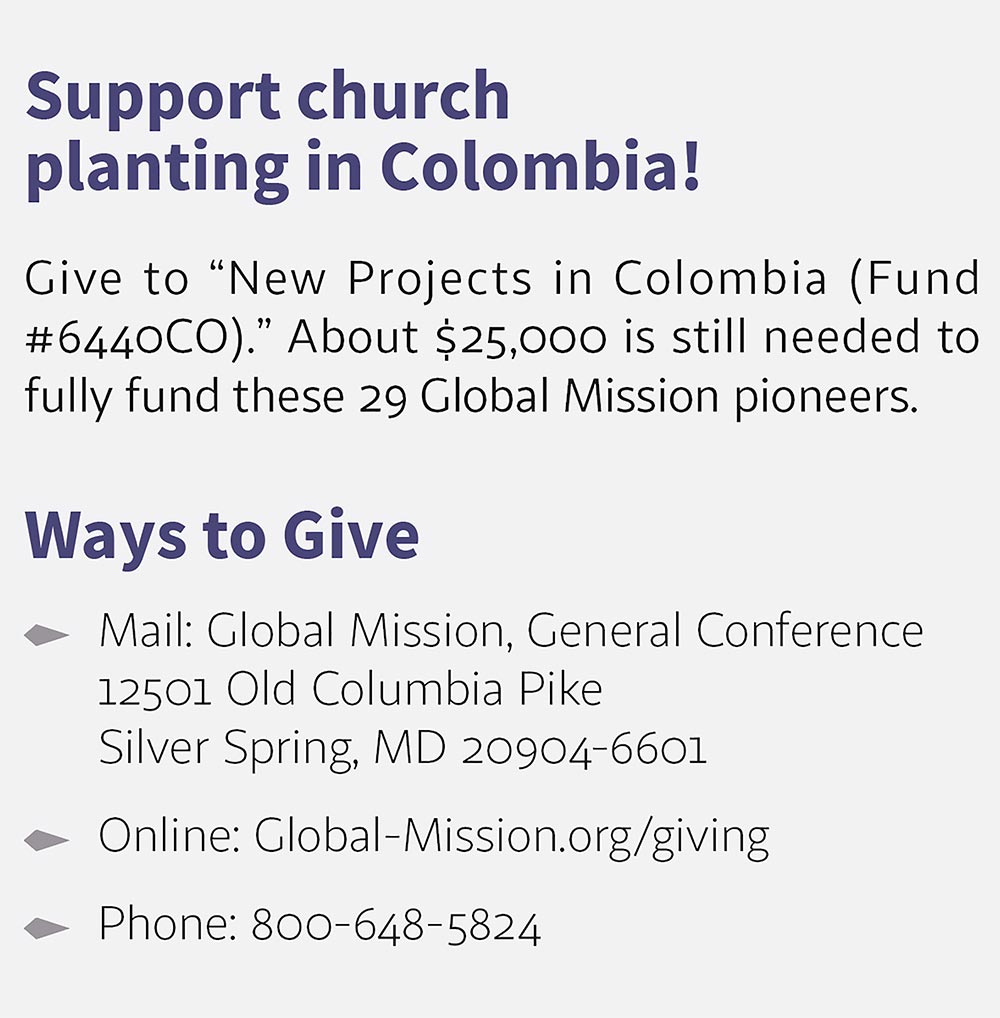 Looking Toward the Future

When the small group was first started, all they had were metal chairs, which were very cold and uncomfortable. Visitors had a hard time focusing on the spiritual message. Later, the group gratefully accepted funds to purchase plastic chairs and an audiovisual system, and they noticed that visitors were more engaged and brought more visitors.

Luis Mario wants to be able to reach even more people by starting a center of influence where “we could put into practice the beliefs and sayings of Sister Ellen White.” The group dreams of a space where they can offer health classes more regularly, along with hydrotherapy and clay and herbal treatments to improve the physical and mental health of the community. This facility would also serve as a distribution center for food and clothing to those in need.

Please pray for this church plant and many others throughout the beautiful country of Colombia as they reach people for Christ. Consider supporting Global Mission pioneers who are actively engaged in this effort and are constantly finding new ways to demonstrate God’s love and compassion for His children.

* “Christ’s method alone will give true success in reaching the people. The Saviour mingled with men as one who desired their good. He showed His sympathy for them, ministered to their needs, and won their confidence. Then He bade them, ‘Follow Me’” (Ellen G. White’s The Ministry of Healing, p. 143).