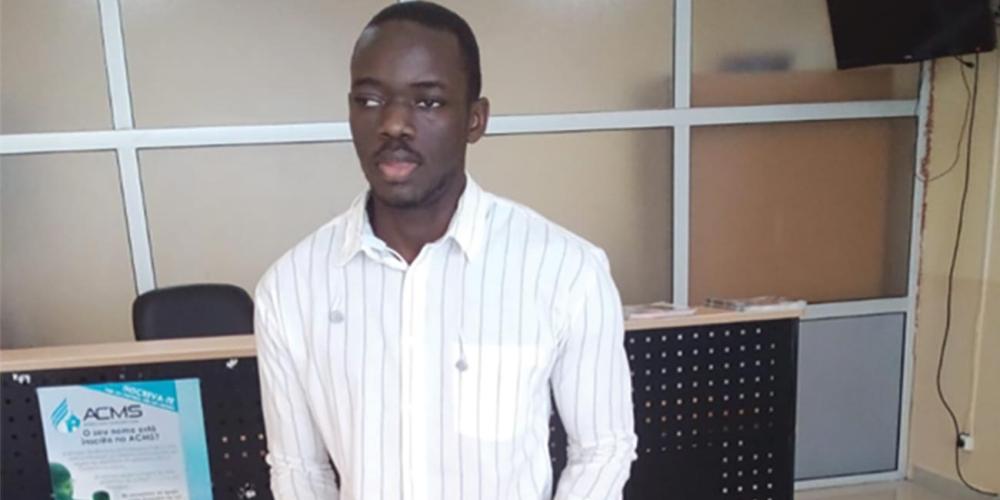 The Thirteenth Sabbath Offering next quarter will help the South American Division to establish churches in:

To Sabbath School teachers: This story is for Sabbath, June 25.

hen Ricardo was 10, he had an accident while jumping over a fence in Angola. He didn’t notice a thin metal wire on the other side of the fence, and it caused him to hit the ground headfirst.

After the accident, he began to lose his sight. At school, he had trouble seeing what the teacher wrote on the chalkboard, and he asked to sit in the front row. After a while, he could not see from the front row. Finally, the teacher sent him home, saying the school could not teach a blind boy.

Ricardo’s parents took him to many doctors, but none could help him. They said he would never see again.

Ricardo was very sad. He could no longer play soccer, ride a bicycle, or play hide and seek with his friends. When he left home, he could hear his old playmates making fun of him. “Little blind boy! Little blind boy!” they said.

The boys and girls thought that they were making a funny joke. They didn’t know that their words were hurting Ricardo. He felt like life was hopeless.

One day, an older cousin invited Ricardo to go on a Pathfinder outing. The cousin was the leader of a Pathfinder club. Ricardo didn’t want to go, but his cousin kept insisting, so finally he went. Ricardo was surprised that he could participate in many Pathfinder activities. The cousin even asked him to help him out. Ricardo felt needed. He felt good.

A short time later, Ricardo heard a sermon that made him want to give his heart to Jesus. But then trouble struck. At the baptismal class, the teacher asked Ricardo and the other people who wanted to be baptized to memorize the Ten Commandments. But Ricardo couldn’t read the Bible or the piece of paper with the Ten Commandments that the teacher passed out. He sadly thought that he would not be able to get baptized. At home, Mother encouraged him. “God willing, you will get baptized,” she said.

During the week, his older sister read the Ten Commandments out loud to Ricardo. She read them again and again so the boy could memorize them.

On Friday, everyone who wanted to be baptized gathered at the church.

“Who will be the first to recite the Ten Commandments?” a church elder asked.

No one volunteered, so Ricardo raised his hand. He couldn’t remember the correct order, but he recited all 10 perfectly. The elder was amazed and shook his hand. Turning to the others, he asked, “Who will recite like Ricardo?”

The next day, on Sabbath, everyone, including Ricardo, was baptized.

Shortly afterward, Ricardo was invited to share the weekly mission story in Sabbath School. When some church members heard, they asked the Sabbath School leader to change his mind.

“Ricardo can’t tell the mission story because he can’t read,” they said.

The Sabbath School leader gently touched Ricardo on the shoulder.

“Do you hear what they are saying?” he asked. Ricardo nodded. “Show everyone what you are able to do,” he said. “Prepare to tell the story next Sabbath.”

Ricardo’s sister read the mission story to him from the Mission quarterly, and he easily memorized it. On Sabbath, Ricardo told the story from beginning to end. When he finished, loud and astonished “Amens” filled the church.

Today, Ricardo is a 25-year-old university student and is preparing to become a pastor. He has led a Pathfinder club for the past two years, and he preaches regularly in churches around Angola. Dozens of people have been baptized after his sermons.

Ricardo is no longer sad. Although he cannot see with his eyes, he knows that God has given Him an excellent memory. He also says doctors were wrong when they said he would never see again, for Revelation 1:7 says, “Behold, He is coming with clouds, and every eye will see Him” (NKJV). This is a promise that when Jesus returns, every eye will see Him — including Ricardo.

“One day I will see the face of my Jesus,” he says.

The Thirteenth Sabbath Offering next quarter will help the South American Division to establish churches in: