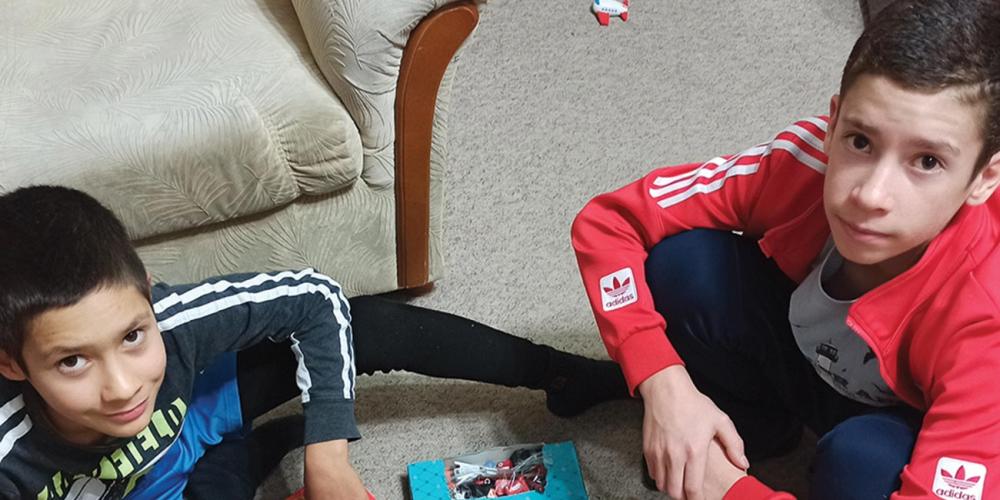 Kyrgyzstan’s largest ethnic group (73.3%) are the Kyrgyz. Historically nomadic, the Kyrgyz moved with their herds of sheep, horses, and yaks, living in portable round tents called yurts. Many Kyrgyz herders are still semi-nomadic and take their herds into the mountains during the summer.

To Sabbath School teachers: This story is for Sabbath, February 6.

ne day 13-year-old Jared read about a boy named Wilford in “Uncle Arthur’s Bedtime Stories.” Wilford liked to surprise people with gifts. He wrapped up gifts, tied them to a rope, and lowered them over people’s walls. Then he fled.

Jared thought it would be fun to do the same thing in Tokmok, Kyrgyzstan, where he lived with his parents and 11-year-old brother, Sam. He asked Mother for permission to put gifts in old tissue boxes.

“What kind of gifts?” Mother asked.

“Some toys and whatever else I can find,” Jared said.

Mother liked the idea. Jared and Sam had cars and Legos that they had brought along when their family moved from Argentina to serve as gospel workers in Kyrgyzstan. Many neighborhood boys were poor and didn’t have toys.

Jared told a school friend, Kamil, about the plan. “Let’s put some toys in boxes and throw them over walls,” he said.

Kamil smiled widely. He thought it was a grand idea, and he wanted to help, even though he didn’t have any toys to give away.

The boys took two tissue boxes and filled them with Legos, toy cars, scarves, and bars of soap. Getting onto their bicycles, they rode to Kamil’s neighborhood and chose two houses at random. Jared hurled one box over a fence, and Kamil threw the other one over another fence. Quickly, the boys pedaled away. At Jared’s house, they laughed as they imagined the surprise of the children who had received the gifts.

Jared’s brother, Sam, overheard the excited conversation. “Can I join you next time?” he asked.

A few days later, the three boys got together to prepare more gifts. They invited another boy from school, Kozimbek, to join them. The boys filled two shoeboxes, two empty tissue boxes, and two plastic bags with a variety of toys, scarves, and soap. Loading the boxes on their bicycles, they set off in search of unsuspecting homes. After a few minutes, Jared saw a house surrounded by a fence. The yard was filled with trees. “Sam,” he said, “throw your bag into the yard.”

Sam tossed the bag over the fence, and it landed in the tree’s lower branches.

“Quick, do something!” Sam squealed.

Kamil was the tallest, so he leaped over the fence. Reaching up into the branches, he grabbed the bag and dropped it on the grass. “Let’s go before anyone sees us!” he shouted.

The boys raced away on their bicycles.

After throwing four more gifts over fences, the boys were left with one last box. Jared spotted a house with a large metal gate. “Quick, push the gift under the gate,” he told Kozimbek.

As soon as Kozimbek pushed the box under the gate, someone yelled, “Why are you throwing garbage into my yard?”

As the boys rode away, they heard the voice suddenly exclaim from behind the gate, “This isn’t garbage. It’s a gift!”

During family worship that evening, Jared and Sam excitedly told Father and Mother about what had happened. Father was pleased. He prayed for the people who had received the gifts.

Jared and Sam are still throwing surprise boxes over people’s fences. No one knows that they are responsible, and that’s the way they want it. ⎭

Part of the Thirteenth Sabbath Offering three years ago helped construct a gymnasium at Jared and Sam’s school in Tokmok, Kyrgyzstan. Thank you for supporting Adventist education.

Kyrgyzstan’s largest ethnic group (73.3%) are the Kyrgyz. Historically nomadic, the Kyrgyz moved with their herds of sheep, horses, and yaks, living in portable round tents called yurts. Many Kyrgyz herders are still semi-nomadic and take their herds into the mountains during the summer.