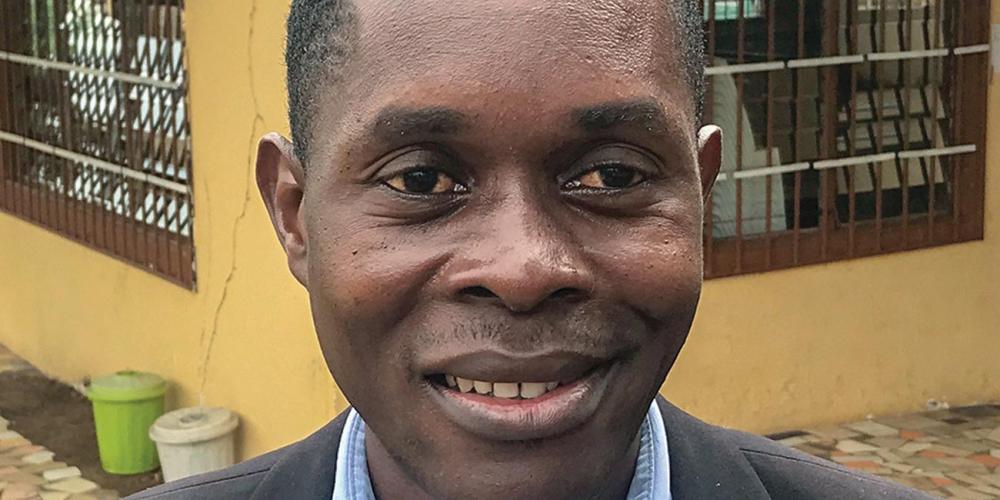 To Sabbath School teachers: This story is for Sabbath, July 18.

Everything went black when 13-year-old Brilland Ndong stepped into the big cathedral in Libreville, Gabon.

His family had just moved to the city from Melo village on the border with Cameroon. Mother took Brilland and his three sisters and two brothers to the cathedral on Sunday.

But when Brilland stepped through the front door, he went blind. Everything was dark. He couldn’t see a thing. And he felt really hot.

“I can’t see anything,” he called out to Mother. “I have a fever. Please take me back outside.”

Mother led him by the hand out the door. As soon as he stepped outside, he could see the sky, trees, and Mother’s worried face.

She placed a hand on his forehead.

“It looks like the fever is gone,” she said.

“Everything is fine now,” he said.

It was the strangest thing. He didn’t understand what had happened, but it seemed that God was not present in that church.

The next Sunday, Mother took Brilland to another cathedral, the biggest in Libreville. He walked in — and everything went black. He had a fever.

Outside the cathedral, he regained his sight, and the fever disappeared.

The next Sunday, Mother took Brilland to the big cathedral one more time. Again Brilland went blind and had a fever. Mother told the boy that he didn’t have to go to church anymore.

Father was happy. He wasn’t a Christian, and he didn’t see any reason for his son to go to church.

Some time passed. One day, Brilland was walking to school and noticed a sign with the words “Seventh-day Adventist Church.” Every day, he passed the sign, and he wondered about the church.

One Saturday, after he finished his chores, he had nothing to do and walked over to the church. At the front door, he cautiously looked inside and saw people sitting around the hall in small groups for Sabbath School. He had never seen people sitting in small groups in a church, and the unfamiliar sight shocked him. He ran home.

The next Saturday, he returned to the church and cautiously put a foot inside the door. He wanted to know more about the church, but he was scared that he would go blind if he entered. With one leg in the church, everything seemed normal. He could see just fine.

Brilland looked up. A man inside the church saw his hesitation and was inviting him to sit down. The boy entered and took a seat. No blindness, and no fever.

Brilland returned every Sabbath after that and was baptized.

Father wasn’t happy. He didn’t like his son going to church.

Brilland prayed for God to soften Father’s heart. But after some time, he could not listen to the angry words anymore and left home. He stayed with an Adventist friend for a week.

At home, Father called a family meeting and invited Brilland to join.

“The church where Brilland is going is the church of the Lord,” Father said. “They don’t permit drinking or smoking. I want all of my children to go to that church, and I will go, too.”

Brilland was surprised and overjoyed. God had answered his prayers and touched Father’s heart. Peace returned to the home.