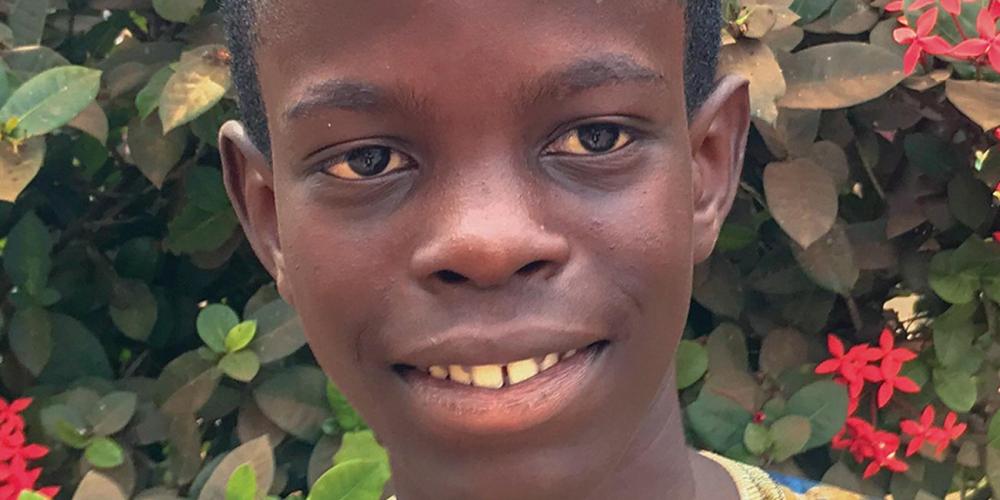 To Sabbath School teachers: This story is for Sabbath, September26.

Junior was not pleased with his new school in Conakry, Guinea.

The one-story school building had no doors or windows. It didn’t have a playground, only piles of dirt. In contrast, his old school was a yellow four-story building with doors and windows. It had a nice playground and a basketball court.

“I don’t like this school,” Junior complained to Father after his first day of third grade. “I’m not happy there.”

Father had enrolled Junior and his younger brother, Emile, at the Seventh-day Adventist school because he wanted them to learn about God. The newly built school didn’t have doors, windows, or a playground because money had run out.

Junior had gone to a regular school for the first and second grades, and Emile was just starting first grade.

Father insisted that Junior should stay at the new school.

“The school will get better,” he said.

Junior wasn’t so sure.

But as the days went by, he began to like the Bible class. He was interested to read that God had created the world and that Jesus had died for his sins. He had never heard about those things before.

One day, the teacher made a big announcement in Bible class.

“We are going to have a quiz tomorrow,” he said.

He wrote five verses on the blackboard and told the children to copy them into their notebooks.

“Memorize one verse for the quiz tomorrow,” she said.

At home, Junior repeated Ephesians 6:1, 2 over and over: “Children, obey your parents in the Lord, for this is right. Honor your father and mother,’ which is the first commandment with promise.”

Father and Mother were happy to see Junior memorizing from the Bible.

The next day, Teacher gave each student a piece of paper and told them to write what they had memorized. Junior received a perfect mark.

After that, Teacher gave many more quizzes, and Junior liked memorizing from the Bible.

Although the school didn’t have basketball, the children began to play another kind of game. Teacher told Junior and another boy and a girl from the third grade to prepare for a big contest against the second-grade class. The contest would determine who knew more Bible verses.

At home, Junior opened his Bible and reread the verses that he had memorized. He was happy that Teacher had chosen him to represent his class. Mother also was happy.

“You will know more about the Bible,” she said.

The next day, Junior joined his two classmates at the front of the classroom. Three students from the second-grade team also stood at the front. The other students watched from their desks.

Teacher gave the rules. She would call out the Bible book and verse, and both teams would have a chance to answer.

The second-grade team knew the answer, and one child said, “For God so loved the world that He gave His only begotten Son, that whoever believes in Him should not perish but have everlasting life.”

The third-grade team also knew the answer: “For God so loved the world that He gave His only begotten Son, that whoever believes in Him should not perish but have everlasting life.”

Both teams received a point. The score was 1-1.

Both teams correctly answered the first three verses. The score was 7-7. Then came the last verse.

The children in the second-grade team looked puzzled. None could remember the verse.

Junior’s teammates also weren’t sure about the verse. But Junior remembered it. It was the verse that he had memorized for the first quiz at the school.

“Children, obey your parents in the Lord, for this is right. ’Honor your father and mother,’ which is the first commandment with promise,” he said.

The third graders shouted with joy and clapped loudly. Warm satisfaction filled Junior. Maybe the new school didn’t look as nice as his old school, and maybe it didn’t have a nice playground. But it wasn’t so bad after all.

Teacher saw that Junior enjoyed Bible class and invited him and Emile to church on Sabbath. Soon Junior and Emile were going to church every Sabbath, and they invited their parents to join them.

Father and Mother also liked the church, and they were baptized. Junior and Emile hope to be baptized as well.

Today, Junior is 13 and wishes that he was still studying at the Adventist school. The school only teaches children in grades one to six and Junior is now in the seventh grade. This quarter’s Thirteenth Sabbath Offering will allow Junior to return to the Adventist school by constructing a new four-story building where children will be able to study from kindergarten to the twelfth grade. Thank you for your Thirteenth Sabbath Offering to help the school and other projects in Liberia and Nigeria.