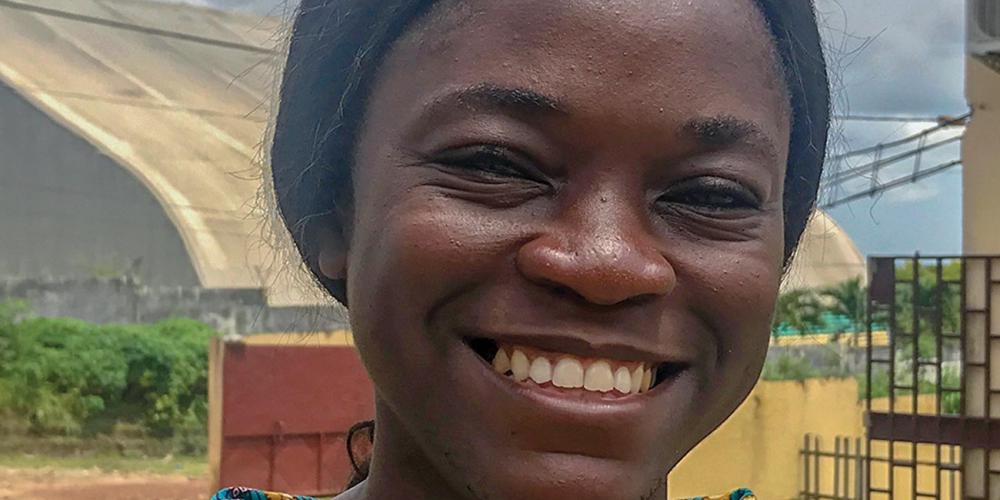 The Gabonese people use masks to mark important life events by signifying transformation. They are part of funeral and agrarian rites, to promote fertility, provide spiritual protection, and express cultural identity. Masks vary in style and include geometric shapes, stylized, and exaggerated features and realistically detailed faces.

To Sabbath School teachers: This story is for Sabbath, August 8.

Something strange happened when Djerlinde Mounguengui was 3. Her hands suddenly felt extremely hot.

“It’s burning! It’s burning!” she wailed, shaking her hands in an unsuccessful effort to cool them off.

Her brothers and sisters laughed. They thought she was playing a game.

But Djerlinde was not playing a game. She felt terrible.

The burning sensation lasted for about a week and then abruptly went away. Everything was normal for two or three months, and then —

As Djerlinde grew older, other strange things happened. Sometimes she ran wildly as if someone were chasing her. When she was 7, she ran out of the house, across the yard, and jumped over the 5-foot (1.5-meter) fence in a single leap. When Mother asked her how she had managed to jump so high, Djerlinde was surprised. She didn’t remember jumping over the fence.

Sometimes Djerlinde felt a strong urge to strangle her parents or her siblings with her bare hands. But she sensed an inner voice say, “Don’t do that!” With all her might, she managed not to attack anyone.

Djerlinde could not go to school. No one knew when she would begin to act strangely, and someone had to watch her all the time. She felt so unhappy.

When Djerlinde was 13, an older sister took her to a Seventh-day Adventist church for an evangelistic series in Port-Gentil, Gabon. The preacher said Jesus could deliver people from any problem. Walking home, the sister asked Djerlinde, “Did you hear what the preacher said? Jesus can deliver you from your madness.”

“I want to be delivered,” Djerlinde said.

After the meetings ended, Djerlinde studied the Bible with a church member in preparation for baptism. But the strange occurrences continued. One evening, she skipped prayer meeting at church because her hands were burning again. Church members came to her house and prayed for her to be delivered from demon possession.

Djerlinde gave her heart to Jesus and was baptized at the age of 14. The strange occurrences faded away, and her brothers and sister saw that something was different. Father asked what had happened.

“I gave my heart to Jesus and was baptized into the Seventh-day Adventist Church,” she replied.

Djerlinde had a new life. Jesus had delivered her, and she was free.

Later she invited Father to evangelistic meetings and he was baptized. Ten of her brothers and sisters have also become Christians. Her favorite Bible verse is Psalms 37:4, which says, “Delight yourself also in the Lord, and He shall give you the desires of your heart.”

“Every time I ask God for something, He answers me,” she said. “I asked the Lord to deliver me from my madness, and He delivered me.”

The Gabonese people use masks to mark important life events by signifying transformation. They are part of funeral and agrarian rites, to promote fertility, provide spiritual protection, and express cultural identity. Masks vary in style and include geometric shapes, stylized, and exaggerated features and realistically detailed faces.