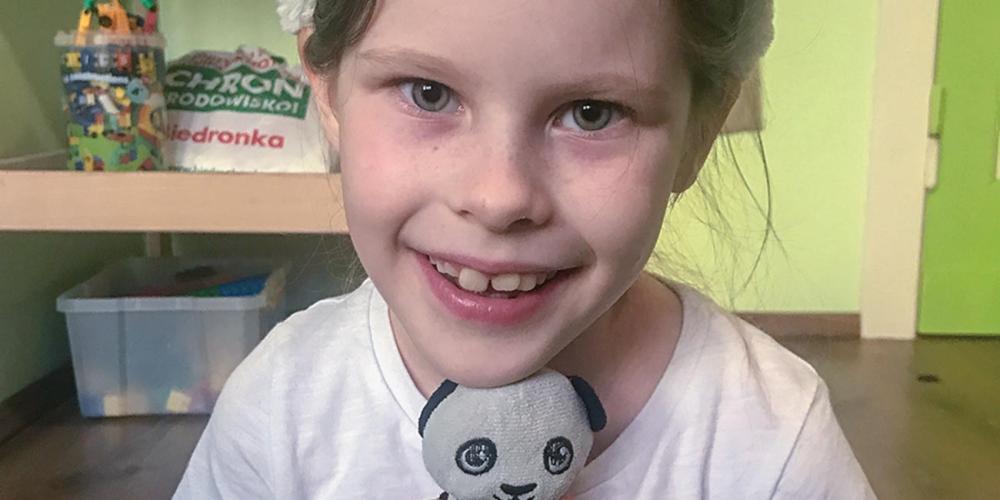 To Sabbath School teachers: This story is for Sabbath, May 23.

Zofia Kluska received Theodore when she was a tiny 3-month-old baby.

Father brought Theodore from the store and placed the cuddly black-and-white panda bear with a small green blanket on Zofia’s bed in Gdynia, Poland.

It was love at first touch. Zofia formed a close relationship with her new friend. Wherever she went, Theodore went.

Theodore became an important member of the family. He attended church. He traveled across the country for visits to Grandfather and Grandmother. He posed in all the family photos.

But one awful day, he disappeared.

Zofia was 3, and she went for a long walk with the babysitter. They played on the playground, swam in the Baltic Sea, and walked up and down the beach. When they returned home, Theodore was nowhere to be found.

At first, Father and Mother thought Theodore hadn’t gone on the walk with Zofia. They searched the house. Under beds and in cupboards. In the bathroom and on the living room sofa. No Theodore.

Mother placed Zofia in the stroller, and she and Father retraced the path that Zofia and the babysitter had taken earlier. They went to the playground. They followed the path to the Baltic Sea. They looked on the sandy beach. No Theodore.

Father and Mother were worried about putting Zofia to bed that night. She had slept with Theodore every night since she was 3 months old.

Before bedtime, Zofia prayed for Theodore. She didn’t cry, but it was hard to sleep.

In the morning, Mother made posters with Theodore’s photo. She wrote with a marker, “Lost! A cuddly toy — a little panda with a green blanket — was lost somewhere around here. He is very special for our little girl and our family. Reward.”

Mother placed the posters at the playground, on the path to the Baltic Sea, and on the beach. Maybe someone would find Theodore and call. Theodore was not found.

Father went to the toy store to look for Theodore. He couldn’t find the panda with a green blanket, but he did see a nice orange lion. At home, Zofia wasn’t excited to receive the lion.

Father turned on his computer and looked for Theodore on eBay. Nothing.

He remembered that the store where he had found Theodore was owned by a Swedish company. He contacted the company’s main office in Poland, but the manager said Theodore wasn’t in any stores in Poland.

Father decided to try one last thing. He wrote an email to the Swedish company’s headquarters in Stockholm. In the letter, he explained that Zofia had lost Theodore and that Theodore was an important member of the family. He asked whether the company had seen Theodore in Sweden.

The company manager wrote back that he also was a father and he felt very sad that Theodore had gone missing.

“We have a special warehouse where we keep one sample of every item that we have ever designed,” he said. “Theodore is there. I will send him to you.”

“Look who has returned home from a very long trip,” he said.

Zofia was so happy!

Today, Zofia is 8, and she takes Theodore everywhere. Father and Mother keep a close eye on Theodore and never let him out of their sight. They don’t want to lose him again.

Thank you for your Thirteenth Sabbath Offering three years ago that helped Hope Channel open a studio in Poland so people can learn about Jesus’ soon coming in the Polish language.