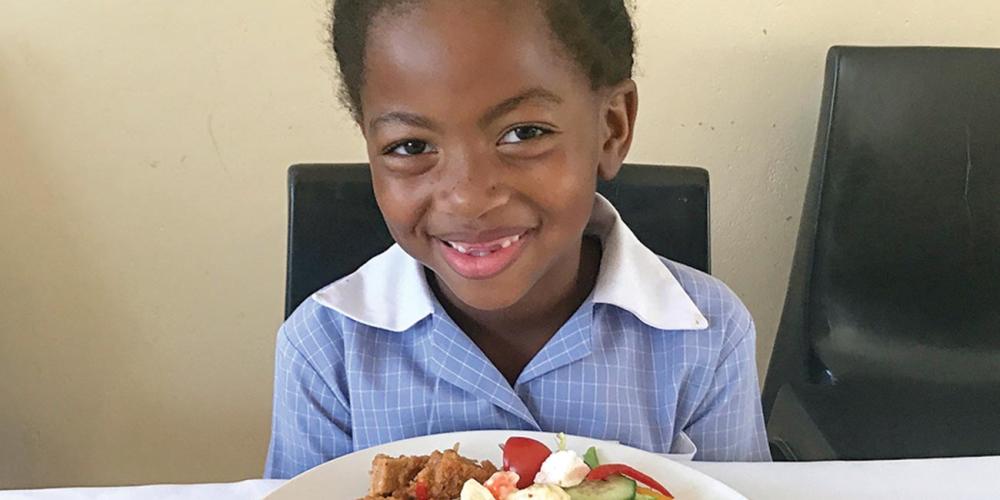 Mother was shocked when Joanna refused meat for supper.

The Makgadigadi pan is one of the largest salt pan areas in the world, covering an area of 7,500 square miles (12,000 square kilometers). The climate is very hot and with little rain. When it does rain, the pan can turn into a blue lake which attracts many of the area’s animals, including flamingos.

To Sabbath School teachers: This story is for Sabbath, Jan. 19.

Six-year-old Joanna wrinkled her little nose at the food that Mother had placed on the table for supper.

Mother gasped with surprise. She had worked hard to prepare the traditional Botswanan meal in their home in Francistown, the second-largest city in the African country. On the table was beef stew; phaleche, a maize porridge that resembles mashed potatoes; and morogo wa dinawa, a spinach-like dish comprised of bean leaves, tomatoes, and onion, with a little oil and salt.

“Is this what you are being taught at school?” she asked.

“Yes, this is what we are being taught,” Joanna said. “The pastor told us not to eat the wrong food. We should eat the right food so we can be clever.”

Mother asked more questions and learned that a week of prayer had just begun at Eastern Gate Primary School, where Joanna was studying in the first grade. The theme for the week of prayer was Daniel, and that morning the school pastor had described how Daniel and his three friends had refused to eat meat in King Nebuchadnezzar’s palace in Babylon. Instead, they had eaten vegetables and become wise, strong men.

“You are not supposed to eat this meat—only vegetables,” Joanna told Mother, pointing to the beef stew. “I want to be clever like Daniel.”

Mother’s face burned with shame because she knew that vegetables were healthier than meat. But she also felt happy because Joanna was learning how to eat properly at her school.

“OK, we thank God for the pastor,” Mother said. “I will do my best to cook the right food.”

The next day, Mother went to the kitchen to prepare supper and remembered her daughter’s desire to avoid meat. So, she told Joanna’s father and 16-year-old brother that she would not cook any meat for the rest of the week while Joanna learned about Daniel. Joanna’s brother grumbled but he finally agreed to eat vegetables.

Joanna was so happy! Every supper she ate vegetables and other food without meat.

Nine months have passed since that special week. Joanna still prefers vegetables, and Mother is trying to cook healthy meals without meat.

Joanna believes that she made the right choice in following Daniel’s example.

“When we eat vegetables, we will become strong and be clever,” Joanna said, smiling brightly.

The principal at Joanna’s school agreed. Joanna is now at the top of her class, and the principal thinks this is because of her healthy meals and her faith that God will reward her choice.

“She’s clever,” said the principal, Lekedzani Mpofu. “She behaves well, is obedient, and remembers what she learns.”

Mother, whose full name is Bessie Lechina, is also happy.

“We had heard about a good diet, but we didn’t practice it,” she said. “It is painful when you hear the truth from a child. I am happy that they are teaching her the right thing at school.”

The Thirteenth Sabbath Offering in fourth quarter 2015 helped pay for the construction of Joanna’s school, Eastern Gate Primary School, which opened in January 2017. It is the first Seventh-day Adventist elementary school in northern Botswana and the third in the country. Thank you for supporting mission with your offering.

The Makgadigadi pan is one of the largest salt pan areas in the world, covering an area of 7,500 square miles (12,000 square kilometers). The climate is very hot and with little rain. When it does rain, the pan can turn into a blue lake which attracts many of the area’s animals, including flamingos.