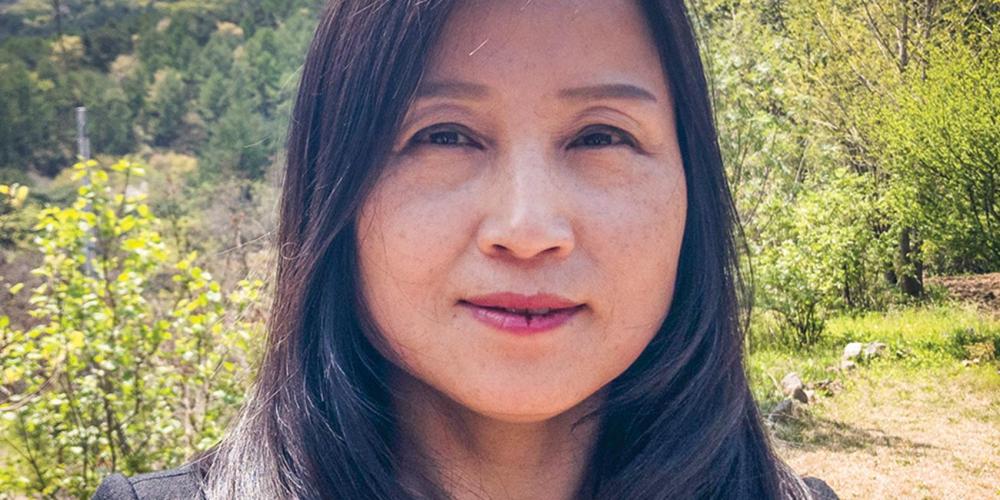 Eunsook shows her love for Jesus by singing.

To Sabbath School teachers: This story is for Sabbath, Aug. 4.

He doesn’t have a job, and he doesn’t own a car. Usually he sleeps with other homeless people in a city square at a train station in South Korea’s capital city, Seoul.

Joongjae may not own many things, but he does have a prized possession: a loudspeaker and microphone. He saved his money and bought the loudspeaker because he wanted to listen to Christian music in the city square where he lives. He loves songs about Jesus.

One day, the loudspeaker didn’t work properly. As Joongjae adjusted some wires, he heard a woman’s voice.

“What are you doing?” the woman asked.

“I’m fixing the loudspeaker,” Joongjae replied. “I like to listen to Christian music.”

“I like Christian music, too!” the woman exclaimed. “And I can sing! I like to sing about Jesus.”

Joongjae finished fixing the loudspeaker, and he handed the woman the microphone. The woman sang a lovely song about Jesus and Talitha. [Ask the children: Do you know the story of Talitha? She is a 12-year-old girl who was resurrected by Jesus in Mark 5.]

Joongjae listened in awe. A crowd gathered. When the woman finished, Joongjae said, “I want to hear you sing every day!”

The woman, Eunsook [pronounced: oon-sook], returned the next week and sang more songs with Joonjae’s microphone and loudspeaker. She came back every Wednesday for five months.

But some people at the train station didn’t like her songs and told Joongjae not to allow her to sing with his loudspeaker anymore. Joongjae felt sad because he liked the music. But he didn’t want trouble, so he told Eunsook that she couldn’t use his loudspeaker.

Eunsook was sad. She realized that she was helping many people with her songs. She didn’t have enough money to buy a new loudspeaker and microphone, so she told her friends on Facebook what had happened. Adventists around the world saw her post, and they sent money. Soon Eunsook returned to the train station with her own loudspeaker.

Eunsook has become a star on the square. People wait all week to hear her sing. People ask her for more information about Jesus, and she tells them how to find an Adventist church nearby. Many people now love Jesus because of Eunsook. One of those people is a man who began to cry as she sang. The man was once a Christian, but he stopped believing in God and later lost his job. When he heard Eunsook sing, he felt as if God was speaking to him. After that, he began to attend church. Another man who goes to church now is a deaf man. He watched as Eunsook sang and later said to her, “I want to go to church. Can you recommend a church?”

Eunsook was surprised! The deaf man could not hear her sing, but he still wanted to know about Jesus! The deaf man now goes to church every Sabbath.

So, what happened to the homeless man, Joongjae? He felt terrible that he hadn’t allowed Eunsook to use his loudspeaker. But he has become her friend. Whenever she sings, he stands nearby and protects her like a bodyguard. And he is very happy. Do you know why? Because he gets to hear beautiful music about Jesus.

Eunsook shows her love for Jesus by singing.

How can you show your love for Jesus? [Wait for children to answer.] You can sing about Jesus just like Eunsook. You can help your parents and friends. And you can give money to the mission offering so people in faraway countries can hear about Jesus.

Watch Eunsook sing “Talitha Koum,” the song about Jesus and Talitha, at the link: bit.ly/singing-for-Jesus