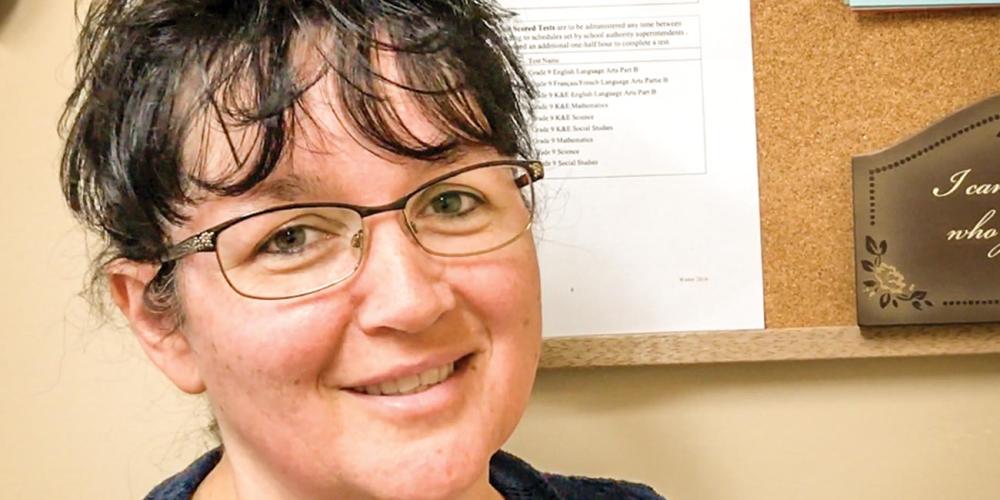 To Sabbath School teachers: This story is for Sabbath, May 12. Click here for photos to share while telling the mission story.

Sixth graders can be a tough bunch, but one teacher found her class of 28 sixth graders especially challenging.

The children didn’t trust Teacher when she arrived at a Seventh-day Adventist school for First Nations children in the Canadian province of Alberta. [Find Alberta on the map; the school is near the city of Edmonton.]

The children were old enough to be in the eighth grade, but they were in the sixth grade because they had missed many classes. The children didn’t seem to want to listen to anyone except a 14-year-old girl in their class named Trina* [pronounced: TREE-na].

Shortly after the school year started, Trina grew furious when Teacher asked her to sit down. She picked up her chair and angrily threw it at Teacher. Fortunately, the chair missed.

Every morning, Teacher started her class by reading a Bible story and asking whether a student wanted to pray. Nobody volunteered. So, Teacher asked the children to bow their heads, fold their hands, and close their eyes as she prayed. Nobody did.

For six months, Teacher read Bible stories and asked for a volunteer to pray. For six months, nobody wanted to pray. Every day, Teacher asked the children to bow their heads, fold their hands, and close their eyes as she prayed, and nobody did. But the children were quiet as Teacher prayed for God to keep them safe and bless their families.

One day, Teacher asked as usual, “Who would like to pray?”

Teacher was surprised! She thought Trina might be joking, and she waited for the girl to add, “Cha,” which means “just kidding” in her native Cree language. [“Cha” is pronounced: chah.]

But Trina didn’t say, “Cha.” Instead she stood and turned around to look at her classmates. “All of you guys have to bow your heads, fold your hands, and close your eyes,” she announced.

The students obeyed! Trina also closed her eyes. Then she opened them and said to Teacher, “I don’t know what to say.”

“Dear Jesus,” she said. “Thank You for today. Thank You for everyone here. Help us to get our homework done—cha!”

Trina threw in a “cha”—a “just kidding”—because she and the other students didn’t do their homework. She was making a joke, just as she would while talking with a friend.

After Trina finished the prayer, the children went back to their normal activities. They acted like nothing unusual had happened.

But Teacher’s heart was pounding. She couldn’t speak. She knew that if she tried to say something, she would start to cry. She couldn’t believe what had happened. She had heard Trina, the toughest sixth grader in school, open her heart to her Creator.

Everything changed that day in the sixth-grade classroom. The children began to trust Teacher, and they spoke openly about Jesus, forgiveness, and many other things.

Two months after Trina prayed, Teacher had another surprise. Trina asked whether they could speak in private. In another room, Trina told Teacher that she had been feeling sad for many months and had thought about dying.

“But I didn’t follow through with my plan because you didn’t give up on me,” Trina said.

Teacher gave Trina a big hug. She knew that God had saved Trina’s life. Even though the girl had been unkind and angry, she had listened to Teacher pray every day for six months, and her heart had been changed. That is the power of prayer.

“I thought that they weren’t paying attention, but the prayers were sinking in,” Teacher said. “It was prayer that changed everything.”

Teacher’s name is Gail Wilton, and she is the principal of Mamawi Atosketan[pronounced: MAMA-way a-TOSS-key-tan] Native School. Part of this quarter’s Thirteenth Sabbath Offering will help the school grow bigger so it can teach more children like Trina about Jesus. Thank you for your mission offering.

*The girl’s name has been changed.