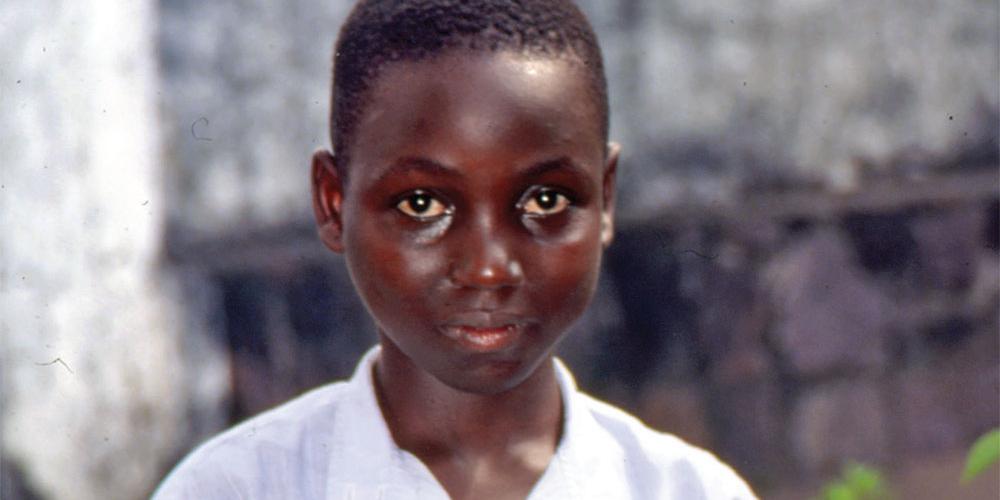 Basile stood on the street corner, enchanted by the beautiful singing coming from a crowd of people before him.

Basile [bah-SEEL] stood on the street corner, enchanted by the beautiful singing coming from a crowd of people before him. Papa would love this! he thought. He turned and ran to his father’s little shop, calling, “Papa, Papa! Come hear the music down the road!” Papa laid down his tools and followed his son to the crowded corner.

Basile lives in the country of Benin [locate Benin on the map]. He has lots of brothers and sisters, for his father had two wives. Papa was a voodoo priest. Voodoo is a form of witchcraft that is common in Benin and neighboring countries of Africa. Papa kept voodoo gods in the family house to protect the family from evil spirits that might want to harm them. He worshipped gods of water, snakes, trees, the dead, and the devil. At Papa’s bakery the workers often argued over which fetishes (idols and charms) provided the best protection against the spirits.

Papa and Basile could hear the music before they could see the choir. They stood nearby and listened. Then the singing stopped, and two men stepped into a large tub of water. One man raised his hand and spoke some words. Then he pushed the other man under the water! But before Papa could react, the first man lifted the other man up from the water and hugged him! Basile and his father had never seen anything quite like this before. “Let’s go!” Papa said. “This is strange voodoo!” They turned to leave, but the choir sang another song. Basile hesitated.

A man stepped up to Papa and invited him to return the next Saturday. “We have beautiful music every week,” the man said.

Papa thanked the man and turned to go. “Papa,” Basile said, “may I come next week and hear the music again? It was so beautiful!”

“Yes, son, you may return,” Papa answered. “Just don’t let anyone put you in that water.”

Basile attended the worship service the following week. He enjoyed the happy music and loved the stories he heard about Jesus. Week after week he attended the meetings, returning home to tell his family what he had learned. In time his mother and sisters attended church with him.

Then one day Basile came home from church with a serious look on his face. “Papa,” he said, “the pastor said that voodoo idols and charms have no power of their own. He said their power comes from the devil, and the devil is not as strong as Jesus. If that is true, we should worship Jesus, not the charms.”

Basile’s older brother didn’t like it that these Christians were taking his family away from their voodoo gods. He decided to shame the church’s pastor by asking him questions that he could not answer. So on Sabbath Basile’s brother went to church with the family. After church his brother asked the pastor many questions. The pastor answered the questions with Bible texts. Before long Basile’s brother started attending church to listen, not to trick the pastor. And one happy day Basile’s mother, his sisters, and his brother accepted Jesus as their Lord and joined the Adventist Church.

Reluctantly Papa agreed to get rid of his idols and charms. And in time he accepted Jesus as his Savior too. But he could not be baptized, because he had two wives.

When Basile’s aunt became sick her family hired voodoo priests to heal her, but she did not get better. Finally she asked Papa to pray for her. Papa asked God to heal his sister, and soon she was healed. She began attending church and was baptized with two of her children.

Other members of the family realized that the Christians’ God was more powerful than the voodoo gods.

When Papa’s second wife went home to her parents’ village, Papa could be baptized. Now the whole family is united in Jesus, all because young Basile believed in Jesus and shared God’s love with his family.

Our mission offerings help people around the world learn about Jesus. Let’s be faithful to bring our offering every week.