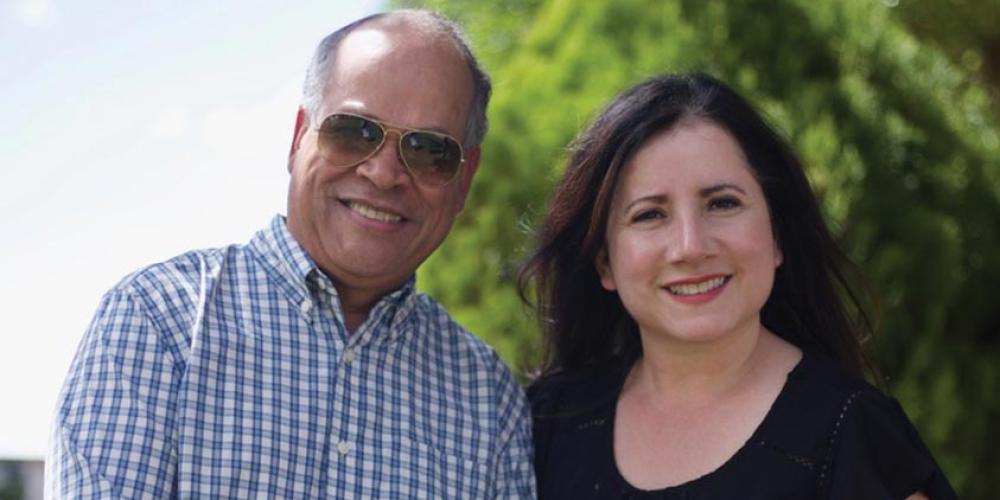 To Sabbath School teachers: This story is for Sabbath, July 31.

By Nannette Ortiz, pictured with her husband in the photo

hat is it like being girls’ dean to a group of several dozen girls and young women at Holbrook Seventh-day Adventist Indian School?

I met Lily when I first came to Holbrook Indian School. The 17-year-old girl immediately adopted me as her grandmother. She was eager to help me around the dormitory. “Can I help you bake the muffins this week?” she would say, or, “Can I help you write the Bible verse on the chalkboard?”

I clearly remember another question that she asked me at the beginning of the school year. “Do you know that I had to be put on a contract twice last year?” she asked.

What was she talking about? I learned that she had been so depressed the previous school year that she had been deemed at risk of harming herself. She had signed the contract as a promise to seek help before doing anything to harm herself.

Many girls who come to Holbrook Indian School arrive with extra emotional baggage. They have experienced many forms of trauma even at an early age. I remember a second grader, Rose, tell me that she had witnessed her father’s murder. One night, as I prepared to leave my dormitory desk go to bed, the little girl ran to me and jumped into my arms.

“I can’t sleep,” she said. “I see my Dad smiling at me through the window.”

I took her back to her room and sang and prayed with her. I had trouble sleeping myself, thinking about what the girls were going through.

Two months into the school year, Lily confided how she was tormented by terrible nightmares. When she started describing the nightmares, I understood why I had come to the school. You see, I had experienced the same kind of nightmares when I was a teenager. God wanted me to develop a special relationship with Lily so I could assure her that she, too, could overcome those nightmares with God’s help. I told her that God had set me free of the nightmares with His power and that He could do the same for her.

Some students would rather stay at the school than go home during vacation. This happens because the environment at home is toxic. I remember, Rose, the second grader, returning from a short vacation with her mother. As I opened the door for her to enter the dormitory, she looked around the place. Then she sighed.

Lily tried to avoid going home. To this day, I do not know what kind of trauma she had experienced that had inflicted so much emotional harm. But that is not my job. My job is to show unconditional love to all the girls, understanding that I am their caregiver and God is their Cure-giver.

Just this week, as we studied the story of Creation, I asked Lily, “Did you know this story before you came to this school?”

“What about the Bible? Did you see a Bible at home or in your shimasani’s [maternal grandmother’s] house?”

She shook her head. The first time that she had seen a Bible was when she came to Holbrook Indian School.

I explained to Lily that many people in the world regard the Creation story as a tale.

“What do you think about this story?”
I asked.

Lily had no doubt.

“Mr. Hubbard, the math teacher, always starts his class with a little devotional,” she said. “Just today, he made us think when he told us how things can’t come up out of nothing. There needs to be a Creator!”

The conversations with Lily and the other girls remind me of 1 Corinthians 3:6, where Paul says, “I planted the seed, Apollos watered it, but God has been making it grow” (NLT).

Thank you for your Thirteenth Sabbath Offering three years ago that helped kickstart plans for a new gym and health center called New Life Center at Holbrook Seventh-day Adventist Indian School. Your offering this quarter will help finish the second phase of the center, where the school will address high rates of obesity, heart disease, diabetes, depression, and suicide among Native American children and youth.