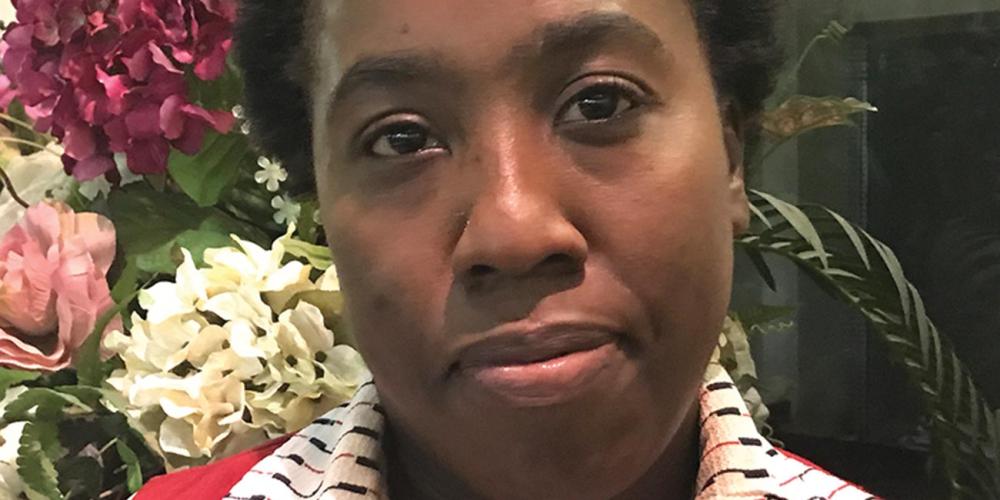 To Sabbath School teachers: This story is for Sabbath, May 1.

By Shinell Davis as told to Andrew McChesney, Adventist Mission

y 10-year-old sister, Shakira, started complaining of back pains after slipping on wet stairs outside our home in Morveant, Trinidad and Tobago.

We thought she had pulled a muscle and gave her painkillers. The pain didn’t go away after a week, so we took her to the hospital. The doctor gave her more painkillers. Shakira stopped eating, and her belly swelled up. Back at the hospital, the doctor said, “I think she has cancer.”

Despite the operations, Shakira was a joyful child and tried to be the most cheerful person in the hospital room. The doctors fell in love with her. After a year she was declared cancer-free.

A few months after she returned home, the cancer returned. I spent many nights with her in the hospital. I remember her moaning, “My back, my belly, my back, my belly.” She was in such pain.

The doctor arranged for an operation.

“Mommy, I don’t want to do this operation,” Shakira said.

“But we have to do it so you can live,” Mother replied.

Shakira died a month after the surgery. I was traveling to the hospital when Mother called with the news. I wept.

Mother, however, did not cry.

“Mommy, is something wrong?” I asked at the funeral. “Why aren’t you crying?”

Four months later, Mother’s foot started to swell up. She stayed two weeks in the hospital, and the doctor diagnosed her with depression from Shakira’s death. He ordered counseling, but Mother refused to go. Six months later, she died.

The loss of my mother so soon after my sister’s death devastated me. But things got worse. A cousin, Mark, visited me often, trying to cheer me up and take my mind off the two tragic deaths. Six months after Mother died, he died in a car accident.

The pain inside me seemed too much to bear. My boyfriend had many tattoos on his arms, chest, back, and mouth. I knew that tattoos were painful, and I decided that a tattoo might ease my pain.

Then my boyfriend drowned in a swimming accident. When I got the phone call, I couldn’t believe it. I remembered my sister, my mother, and my cousin. Now my boyfriend was dead. I began to scream.

I called my workplace to say that I wouldn’t be able to make it to a corporate event that evening because I had to identify my boyfriend’s body at the hospital. My employer told me to wait for her nephew, Marc.

Seeing my boyfriend’s body was like the end for me. I didn’t see any reason to live. Four months later, I had miscarriage.

Life seemed dark, but Marc brought some light to my life. He visited me every day and shared verses from the Bible.

“Have you heard John 3:16?” he asked. “It says, ‘For God so loved the world that He gave His only begotten Son, that whoever believes in Him shall not perish but have everlasting life.’”

One day Marc took me to meet his parents. His father listened to my grief and gave me his phone number.

“If you ever need someone to talk to, call me,” he said. “Give yourself time. God has a purpose for you.”

After that, Marc often took me to his parents. I liked them, and I was interested to hear them talk about God. One day as we were talking, I asked whether I could go to church with them.

The next Sabbath, I went to church with Marc and his parents.

As we worshiped week after week, I began to feel happy again. The sermons seemed to be just for me. My pain eased. I read the Bible and the Adult Sabbath School Bible Study Guide every day, searching for answers about life.

One Sabbath, the preacher appealed for those who wished to give their hearts to Jesus in baptism to stand.

I stood immediately. I knew that I wanted to live for Jesus. Marc also stood.

Later I learned that Marc had stopped attending church five years earlier and had only returned when I had asked to go.

Marc’s parents were thrilled. They had been praying for Marc to return to Jesus.

Marc and I were baptized on the same day and got married eleven months later.

Sometime people say to me, “You don’t know what I am going through.” Then they hear my story and say, “You went through all that? How are you still alive?” I reply, “It is God.” He has given me a new life.

This quarter’s Thirteenth Sabbath Offering will help open a Better Living “center of influence” to train students to be missionaries at University of the Southern Caribbean in Trinidad and Tobago.