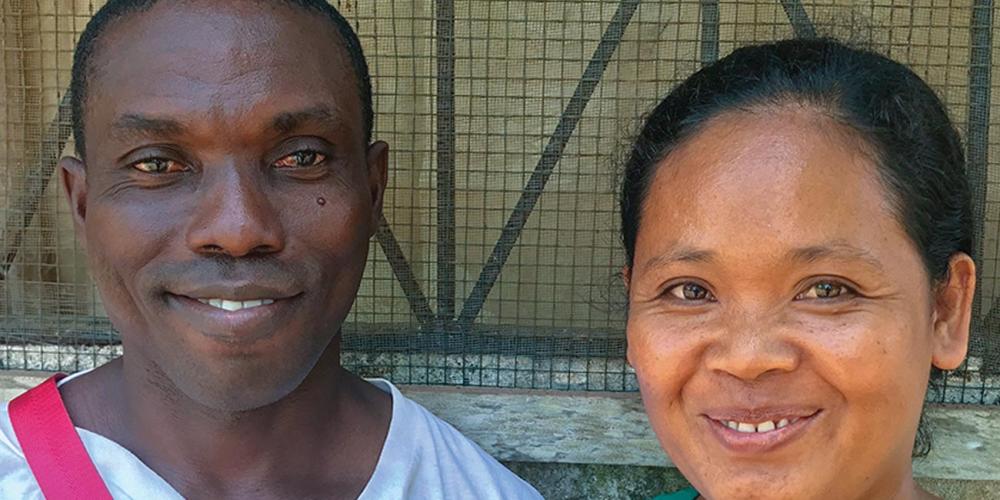 To Sabbath School teachers: This story is for Sabbath, July 18.

At the age of 19, Alphanso Peter Juah fled civil war in Liberia by boarding a train and traveling to Guinea.

Little did he know that the trip would take him to eight countries and that he would return home with an Indonesian wife 14 years later.

Times were tough when Alphanso left in 1992, and he quickly abandoned the Seventh-day Adventist Church of his childhood.

With the help of a humanitarian agency, he finished his studies in Guinea but then found himself homeless. He resorted to any scheme that he could think of to earn money. He sold heroin. He tricked people out of money. He laundered money.

After a year, he longed for new opportunities, so he illegally bought a Guinean passport and moved to Senegal. For four years, he sold heroin, tricked people out of money, and laundered money. Seeking more opportunities, he traveled to Tunisia and then to Jordan, India, Thailand, and Indonesia. In each country, he sold drugs, tricked people, and laundered money, earning enough to live on and to move to the next place. He found money could buy anything, including visas to pursue his travels.

In Indonesia’s capital, Jakarta, Alphanso began to think hard about life. He remembered attending church on Sabbaths. He felt bad because he knew that he wasn’t obeying God’s commandments. One day, he spoke about God while playing pool with a Spanish stranger. The stranger invited him to visit his church the next Sunday. The U.S. missionary who led the Sunday church listened to Alphanso’s story and offered to help pay his house rent. In exchange, Alphanso worked on the church grounds and managed its sound system.

Alphanso kept thinking about the Sabbath. He found the address of an Adventist church and began to attend worship services every Sabbath while still working at the other church on Sundays. With only a high-school education, he longed to study at a university, but no one seemed able to assist him. The Sunday church didn’t help. The Adventists also didn’t help, but they did reconnect him with his parents in Liberia. He hadn’t spoken with them since fleeing Liberia.

Three years passed, and the Sunday church stopped supporting him. Alphanso returned to selling drugs, tricking people, and laundering money. But something big happened in his life around that time. He got married. While working at the Sunday church, he had fallen in love with Wastinah, a relative of the missionary’s housekeeper.

After a while, Alphanso felt the familiar desire for new opportunities and moved to China. After four months, he sent for his wife. While in China, his thoughts returned to God, and he found an English-language Bible at a bookstore. One day, his eye fell on Ecclesiastes 1:2, which reads, “Vanity of vanities, all is vanity.”

“My life is filled with vanity,” he thought. “I need to go home to Africa.”

He and Wastinah flew to Liberia in 2006. Back home, he had a tearful reunion with his parents. He gave his heart to Jesus and went to church every Sabbath. Wastinah joined him and, after some time, gave her heart to Jesus.

Today, Alphanso works as a logger in Buchanan, and Wastinah sells rice, oil, and other groceries from a roadside stall in front of their house. They have three children ages 12, 8, and 5. Alphanso readily shares his story about God’s grace in his life.

Part of this quarter’s Thirteenth Sabbath Offering will help to construct a K-6 school in Buchanan, Liberia, to replace a school destroyed in Liberia’s civil war. Alphanso hopes to send his children to the school.