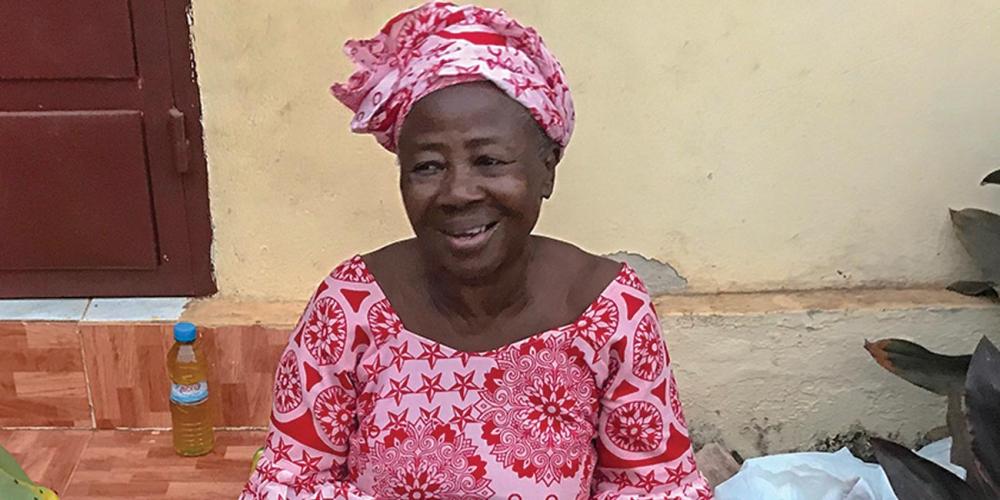 To Sabbath School teachers: This story is for Sabbath, August 29.

Her knees swelled up, and she suffered serious pain. She could not sleep at night. She could not walk. Although she was old, she crawled like a baby in the family home in Conakry, Guinea.

An elderly uncle, Amara, took her to various hospitals, but no physician could help. He took her to witchdoctors, but none could help. She stayed in bed at the family home, where she lived with her uncle, a younger sister, and a dozen other relatives.

One day, Oumou overheard her sister talking with a visitor in another room. The visitor read from the Bible and prayed. Oumou wasn’t a Christian, but she wanted someone to pray for her. With great effort, she climbed out of bed and crawled on her hands and knees to the next room.

“Please, pray for me, too,” she pleaded.

The visitor, Tranqulle Fassinadouno, was astonished to see the old woman crawling on all fours. He didn’t pray.

Three days later, Oumou heard a knock on the door and, a moment later, Tranqulle was standing over her bed.

Tranqulle opened his Bible and read 1 John 4:4, which says, “You are of God, little children, and have overcome them, because He who is in you is greater than he who is in the world.”

Then he closed his eyes to pray.

“Lord, thank you for the life of your daughter,” he said. “You allowed me to be here. You gave me courage to fast and pray for the past three days for her. Now I ask you to heal my sister Oumou in the name of Jesus.”

That night, Oumou slept well for the first time in years. Her pain subsided.

The next day, Tranqulle returned and prayed with her again. He prayed and fasted for Oumou for two weeks.

One day Oumou abruptly asked him, “Where is your church?”

He told her the address of a Seventh-day Adventist church. It wasn’t far from her house, but she couldn’t walk. She asked for help. On Sabbath morning, Tranqulle carried Oumou to his motorcycle and drove her to church. He took her again the next Sabbath, and the next. Every day, Oumou grew stronger. On the fourth Sabbath, she walked to church alone.

Tranqulle was amazed to see Oumou walking around at the church.

“This is a miracle of Jesus!” he exclaimed.

Oumou’s uncle and other family members were happy that she felt better, but they did not like seeing her go to church. They weren’t Christians, and they felt that Oumou was being disrespectful of their family’s religion. Uncle Amara called a big family meeting. As a dozen family members watched, he held up a black Bible and the family’s traditional holy book.

“Which book do you choose?” he asked Oumou. “Remember, if you don’t choose our holy book, you will no longer be part of our family.”

Oumou thought about her four-year illness and how she had been healed. She lifted her eyes to heaven.

“I choose the Bible, that black book,” she said.

“Now that you have chosen the Bible, take it and preach to us,” he said.

Tears formed in Oumou’s eyes. She didn’t know how to read.

“You know that I cannot read,” she said, weeping. “I never went to school. But the man who prayed for me read from the Bible and I was healed. I believe the power in the Bible can do more for me and for you, too.”

“You have become a Christian,” he said. “Go to the Christians. We don’t want anything more to do with you.”

Oumou had no place to live, and she slept in various friends’ houses. It was difficult, but she refused to denounce Jesus. When church members learned about her situation, they offered her a place to live on the church compound. That’s where she lives today.

“I thank God for my new family,” Oumou said. “I will be with the Lord Jesus forever.”

Part of this quarter’s Thirteenth Sabbath Offering will help construct Kobaya Academy, a K-12 school in Conakry, Guinea, where the love of Jesus can be taught to many children from non-Christian homes.