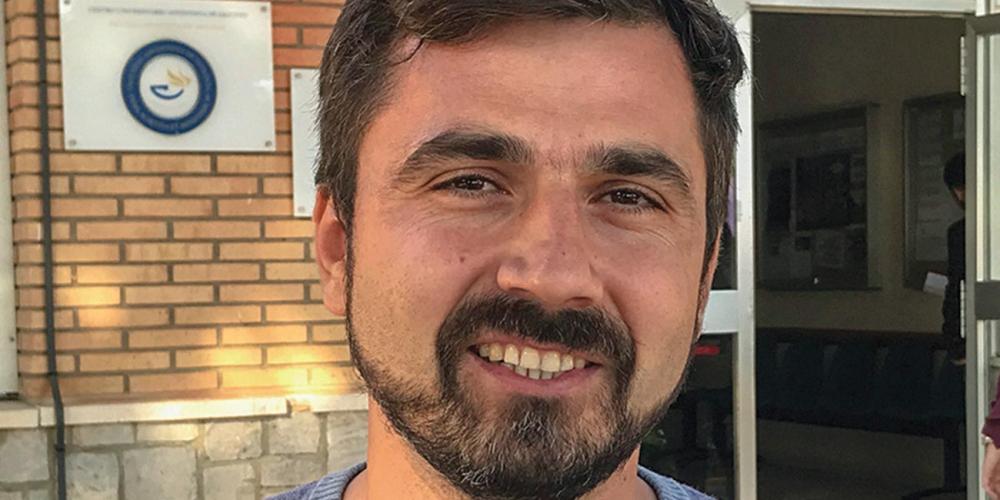 To Sabbath School teachers: This story is for Sabbath, March 7.

All three were in Laurentiu Stefan Druga’s eighth grade class, and before long they invited him to church. Laurentiu fell in love with Jesus and was baptized.

A desire blossomed in him to become a pastor. The Adventist school in Bucharest, however, only had 20 openings, and Laurentiu had to score well on the entrance exam. On exam day, Laurentiu entered the classroom and sat at a big table. He looked down at the paper in front of him and took the exam. He placed 21st.

“No problem,” he told his parents. “I’ll try again next year.”

That year, however, he grew careless in his spiritual life. When the time came for the entrance exam, he entered the same classroom. He sat at the same big table. He looked down at the paper. But something felt wrong. He knew that he was living an ungodly life, and his mind went blank. Abruptly, he stood up and left the room.

Several years passed. Laurentiu moved to Spain and became a construction worker. He got married and drifted farther from God. At the age of 23, he met an uncle, an Adventist, also working in Spain. He remembered his first love for God and his desire to become a pastor. He and his wife decided to be baptized together.

Ahead of the big day, Laurentiu began to wonder how to plan his new life. “God,” he prayed, “what is your plan for me?”

The next day, he prayed again, “God, what is your plan for me?”

Two nights after his baptism, Laurentiu had a dream. In the dream, he entered a classroom, sat at a big table and looked at a piece of paper. With horror, he realized that he was taking a math exam and hadn’t studied for the past year. His mind went blank. Fear turned to panic, and his heart beat wildly. At that moment, Laurentiu woke up. It was 3 a.m. “That was just a dream,” he reassured himself.

Falling asleep, he had a second dream. This time he stood, talking and smiling, at the pulpit in his Madrid church. People listened with great interest. Peace flowed through him. He sensed God’s presence.

In the morning, Laurentiu dismissed the dreams. That night, he prayed as usual, “God, what is your plan for me?”

Asleep, he dreamed that he entered a classroom and sat at a big table. Looking down, he saw that he was taking a Romanian-language exam. He hadn’t studied for a year, and his mind went blank. He panicked. A moment later, however, he was seated at another table. Now he was smiling and laughing as he spoke to a group of people who listened with interest. Joyfully he sensed God’s presence.

Similar dreams occurred nearly every night. The classroom was always the same, but the exam varied. He never was prepared for the exam, and he felt miserable.

Then the scene changed to a church, another table, or a crowd of people. He was teaching and sensed God’s presence.

After about three months of dreams, Laurentiu wondered whether God was telling him to become a pastor. “But how?” he asked God. “I can’t quit my job. I’m married and have a family to support.”

The dreams kept coming. A year passed. Then two, three, four years. He told his parents and several close friends about the dreams, but they dismissed them as the workings of his subconscious mind.

Eventually, he got used to the dreams. While sleeping, he would wait for the miserable first part to end so he could enjoy the pleasant second part.

Also every evening, Laurentiu kept praying, “God, what is your plan for me?”

After 10 years, Laurentiu told his wife about the dreams. One evening, Laurentiu and his wife attended a youth conference of about 250 people. The speaker seemed to be reading his thoughts. Every time Laurentiu raised an objection in his mind about becoming a pastor, the speaker responded from the platform with an answer. Laurentiu’s wife nudged him. “You have to go to the seminary,” she said.

Part of this quarter’s Thirteenth Sabbath Offering will help construct a much-needed building for the seminary where Laurentiu studies at Sagunto Adventist College.