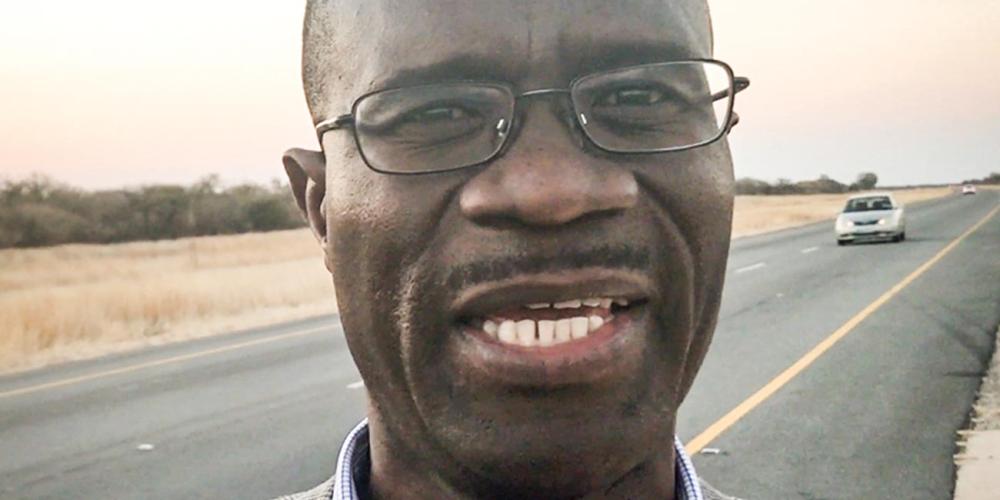 Pulled Over by Helicopter

Kenaope Kenaope didn’t give a second thought to the police helicopter that buzzed his car.

To Sabbath School teachers: This story is for Sabbath, Jan. 5.

enaope Kenaope, leader of the Seventh-day Adventist Church in Botswana, didn’t give a second thought to the police helicopter that buzzed his car as he sped between the African country’s two largest cities.

But the helicopter swung low a second time and roared past him.

Kenaope wondered whether the police were in pursuit of a criminal, perhaps a man on foot whom he had seen walking along the highway a few minutes earlier.

Then the helicopter raced ahead of the car and slowly descended to the ground. Kenaope’s heart began to pound, and he stepped on the brakes.

The helicopter touched down near Kenaope’s stopped car, the thundering blades flinging a whirlwind of dust and grass over the vehicle.

Moments later, the rotors stopped and Kenaope stepped out of his car. In Botswana, a motorist stopped by the police is supposed to approach the police vehicle. Kenaope, wearing a suit and tie after attending a church meeting, had never been stopped by a helicopter, and he wasn’t sure whether he was supposed to walk over to it.

Two police officers alighted from the helicopter, and they met Kenaope on a patch of dry grass beside the road.

“Sir, we are stopping you,” one officer said.

Kenaope didn’t know what to say. His mouth went dry. But he managed to force out two words: “For what?”

“We’re stopping you because you are speeding,” the officer said.

The officer was speaking the truth. Kenaope had left Francistown in northern Botswana to make the 270-mile (435-kilometer) drive south to the capital, Gaborone, in the late afternoon. In Francistown, he had attended a key church meeting about the opening of the Adventist Church’s first elementary school in northern Botswana. Eager to return home, he had set the car’s cruise control to 95 miles per hour (150 kilometers per hour)—a full 20 miles per hour (30 kilometers per hour) over the speed limit.

Kenaope handed his driver’s license to the police officers. He felt deep embarrassment. Cars stopped on both sides of the road, and their occupants strained to see what was happening. Kenaope detected a flicker of recognition cross the face of the second police officer. He knew Kenaope, perhaps from his occasional appearances on national television or his popular seminars at a police academy.

The first officer spoke. “Where are you going?” he asked.

“Be careful,” the officer said and handed back the driver’s license. “You can go.”

The officer looked at Kenaope and then glanced over at his car, covered with dirt and grass from the helicopter. “We’re sorry for making the car dirty,” he said.

Shame and relief washed over Kenaope. He was free.

“At that moment, I felt the value of forgiveness,” Kenaope said. “I noticed that this thing, forgiveness, which we take for granted, is very important. I got it from the police, and I am asking God to help me give it to other people.”

Being stopped by a police helicopter for speeding isn’t common in Botswana. But it is even more rare to be stopped and forgiven.

“Landing a helicopter and then letting me go was a waste of their time and energy,” said Kenaope, president of the Adventist Church’s Botswana Union Conference. “For me, this is not easy to explain. Being forgiven was as big a surprise as being stopped.”

Kenaope, 50, recounted the 2017 incident while driving an Adventist Mission writer on the Gaborone-Francistown highway for a visit to Eastern Gate Primary School, a project funded by a Thirteenth Sabbath Offering in 2015. A police helicopter hovering overhead triggered the memory.

“Up to now, when I see a helicopter, I become nervous, check my speed, and think, ‘I hope that it is not coming for me,’” Kenaope said. “But then I remember sweet forgiveness—and I drive responsibly, so I don’t repeat the same mistake.”

The Thirteenth Sabbath Offering in fourth quarter 2015 helped open the Eastern Gate Primary School in Francistown in January 2017, a full year ahead of schedule. This is the first Adventist elementary school in northern Botswana, giving the church a total of three elementary schools and two high schools in the country. Thank you for your mission offering.

For this and other stories, download the youth and adult Mission quarterly (PDF)