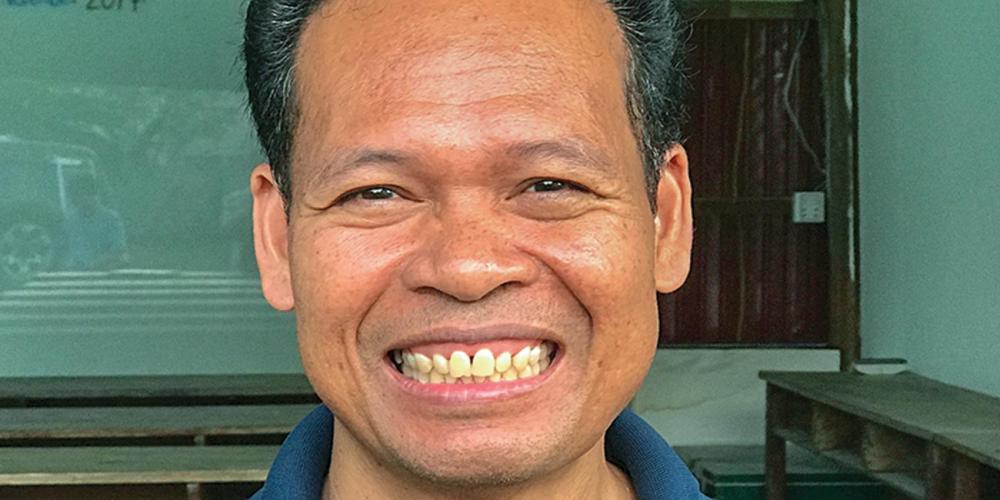 “If God had not performed the miracle, I probably wouldn’t believe in Him today,” Som An says.

To Sabbath School teachers: This story is for Sabbath, Oct. 20.

Sorn Som An, an only child raised by a single mother on a farm in Cambodia, started attending church because he hoped to win over a girl.

But it took more than a girl for him to break free from family religious tradition. It took the vision of a floating hand.

As a teen, Som An followed his girlfriend to her church every Sunday in their hometown of Doun Kaev, located about 45 miles (70 kilometers) south of Cambodia’s capital, Phnom Penh.

One Sunday, a Seventh-day Adventist gospel worker spoke to the congregation at the invitation of one of the church’s 30 members. The Adventist’s message intrigued the members, and they invited him to speak again the next week. After the third sermon, the church members unanimously agreed to become Adventist, and they asked Som An to travel to Phnom Penh to inform Adventist leaders about their decision.

The 30 church members were later baptized. Som An also was baptized, but he didn’t really believe in God.

“I was born into a non-Christian family, and change didn’t come easily,” he said.

After his baptism, he moved to Phnom Penh to study at a university. With little money of his own, he asked church leaders for help. He was given the keys to a small one-room house, where he could live rent-free.

Som An fell terribly ill during his second year of studies. His body burned hot, and he could barely move on his bed. He thought he was going to die. Then he remembered hearing that Jesus was a powerful God. He thought, “Why don’t I try to pray and ask God for help?”

He tried to get out of bed to kneel, but he collapsed back on the mattress. He tried again to get up, but failed. Mustering all his strength, he finally managed to push himself onto his knees on the third attempt.

Closing his eyes, he said, “Dear Lord, would you please help me?”

As he began to speak, he saw a spark of light emerge from his forehead, burn brightly for a few seconds, and vanish. Startled, he thought, “This is the power of God!”

But he didn’t pause his prayer. “I heard that you are a powerful God,” he said. “In the Bible, you healed many people. I hope that you can help me and heal me. Thank you for everything that you helped me with. Amen.”

Som An sank back into bed. At that moment, with his eyes still closed, he saw an outstretched hand and arm appear above his feet. The form appeared to be made of pure light, and it slowly floated from his toes to his knees. As the hand passed over his legs, the fever left that part of his body. Then the hand moved up to his stomach. Whatever the hand passed over was healed. When the hand reached his head, he felt completely well.

Today, Som An is 40 and a theology teacher at a private university in Battambang, the second-biggest city in Cambodia. He is active in the local church and readily tells everyone about God’s power.

“My heart is so stubborn, like Thomas,” he said, referring to the biblical disciple who refused to believe that Jesus was resurrected until he saw evidence.

“I really believe that God used His power to change my heart,” he said. “If God had not performed the miracle, I probably wouldn’t believe in Him today. Now I strongly believe in God. No matter how difficult life gets, I will still believe in Him.”

Part of this quarter’s Thirteenth Sabbath Offering will help construct a community center at Som An’s church. The “center of influence” will feature a medical and dental clinic, a vegetarian restaurant, an organic produce shop, a juice bar, and a fitness center. Thank you for your mission offering.