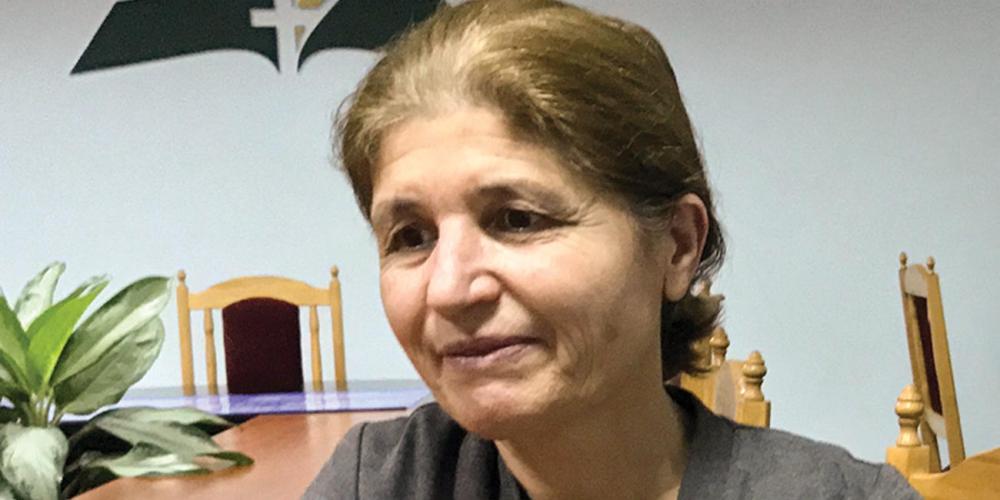 I secretly visited an Adventist family and listened to them read from the Bible.

To Sabbath School teachers: This story is for Sabbath, Dec. 16. Click here for photos to share while telling the mission story.

By Nadezhda Raya, as told to Andrew McChesney, adventistmission.org

Ask a woman to present this first-person report.

My husband and I lived near a Seventh-day Adventist church. I often saw people walking along the road, some carrying Bibles pressed against their chests. I began to think that something was missing from my life because I didn’t know what the Bible said. This happened around the time of the collapse of the Soviet Union. Bibles were not common in Moldova, and I didn’t have one.

Wishing to learn more, I secretly visited an Adventist family and listened to them read from the Bible. I didn’t want anyone to know what I was doing because people in my town laughed at Adventists.

After a while, I asked the Adventist family for a Bible, and they gave me one. I was surprised that the Sabbath seemed to appear on every page. I thought, “This must not be an Orthodox Bible.”

I became curious about which was the right day to worship: was it Sabbath, as the Bible said, or Sunday, as my Orthodox neighbors believed?

My mother told me to go to a nearby town and ask a certain priest. “He is an honest person,” she said. “He will tell you.”

I found the priest and told him, “I have come to buy a Bible. I have an Adventist Bible, and I want to compare it with the Orthodox Bible.” The priest ordered someone to bring a Bible. As we waited, I asked the priest, “What does the Bible say is the right day to worship?”

He said, “You want to buy a Bible. See for yourself.”

“No, tell me. Please,” I said. “I want to hear it from you.” I begged him, but he refused to give me a simple answer.

Someone finally brought me a Bible, and I paid the priest 30 rubles, a considerable sum at the time. A fear overwhelmed me as I left the Orthodox church. I wondered what my husband would say when he learned that I had paid so much for a Bible.

I decided not to go home immediately, so I went to visit my mother first. Along the way, I met my older brother and told him the whole story. We compared the two Bibles on the road. I saw that the texts were identical in both and thought with dread, What have I done? I have paid precious money for Bibles that are the same. I prayed that my husband would not find out.

Moments later my brother declared that he wanted my new Bible and gave me back my 30 rubles. I couldn’t believe it! God had answered my prayer!

Back at home, my husband didn’t support my new desire to become an Adventist. We had not attended any church, and he didn’t want to start now. I began to pray for him.

Around the time that I was baptized, a terrible rash broke out on my husband’s chest and back. It was horrible to look at. Every time I washed his sores, I asked God for help. I remember my tears falling on his back as I prayed, “This is my husband. I love him.” Some time passed. One day while I was washing his back, I exclaimed, “What happened to your rash?”

My husband replied, “I don’t know!” The rash was gone.

After that, my husband began to think about his anger toward me for attending church. One night he had a dream in which he saw the Second Coming. He felt the earth shake. He awoke with a start and turned to me, asking, “Do I have time to be baptized?”

My second prayer was answered. My husband was baptized 10 years after me.

Then I started praying for a dear friend from school days. I hadn’t seen her for 20 years, and I prayed for her salvation. One day, my husband and I traveled to Moldova’s capital for a special celebration at the church’s headquarters. At the celebration, my old friend whom I had been praying for ran up to me. I asked her, “What are you doing with all these Adventists?”

She said, “I also am an Adventist.”

She replied, “You told me 20 years ago that the Adventist Church was the right church.”

“That isn’t possible,” I said. “I didn’t even know Adventists back then.”

She insisted that I had introduced her to the Adventist faith.

The only explanation that I can think of is that I probably spoke to her about Christians, and God intervened so she heard the word “Adventists” instead of “Christians.” After that conversation, my friend embarked on a spiritual journey that led her to the Adventist Church. God answered my prayer for her salvation 20 years before I asked.

This is the power of prayer.

I am praying now for a Soviet-era health resort that the Adventist Church is turning into a Pathfinder camp and conference center with money from this quarter’s Thirteenth Sabbath Offering. Join me in supporting this important project.