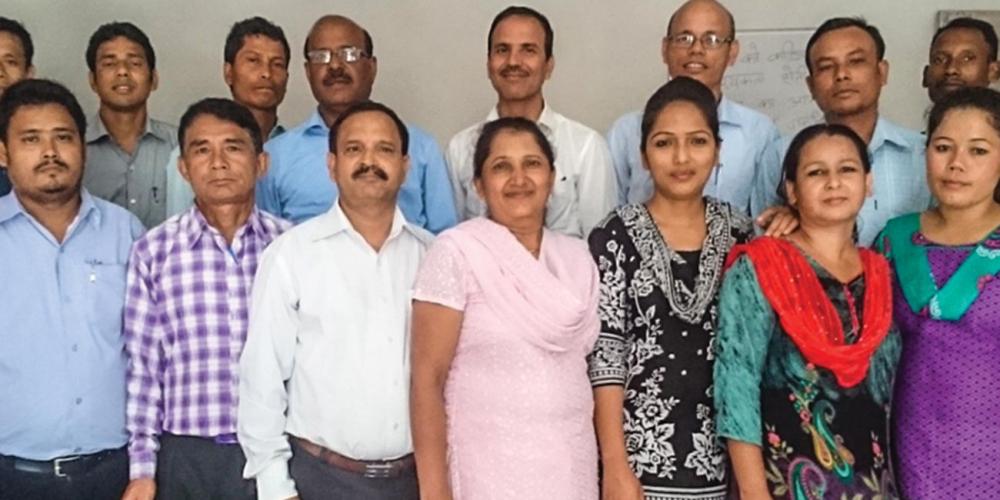 Opening Song
“Far and Near the Fields Are Teeming”
The Seventh-day Adventist Hymnal, no. 358

Program
“The Future Is Now”

Offering
While the offering is being taken, ask the children to sing "Jesus Loves Me" in one or more of the languages of India.

Closing Song
"In the Heart of Jesus"
The Seventh-day Adventist Hymnal, no. 577

Participants: Three speakers and a narrator, including, if possible, at least one teen. If your group is small, two speakers can take turns giving the reports. [Note: participants do not need to memorize their parts, but they should be familiar enough with the material that they do not have to read everything from the script. Practice so that participants can feel comfortable adding inflection where appropriate.]

Narrator: The Southern Asia Division covers three countries, Bhutan, India, and Nepal, plus a number of islands. India, the most populous country in the division, has more than 1.2 billion people. It's the second-largest country in the world. Almost 80 percent of the people in India follow Hindu beliefs. Muslims number about 13 percent, and Christians come in third at about 2.3 percent of the population. About 1.6 million people are Seventh-day Adventists. That is about one Adventist in every 870 people.

For the past 100 years, Adventist education has laid the foundation for evangelism. Our schools are highly respected throughout the country, and many who aren't Christians send their children to Adventist schools so that they will have the advantage of quality education. Other parents are invited to enroll their children in an Adventist school by a friend or relative. But when children learn the stories of God's love, they share them with their families, and lives change.

Reporter 1: Alisha is from a non-Christian home. When her parents allowed her to study in a large Adventist boarding school in India, they didn't know that the school was Christian. Alisha arrived knowing little about Jesus. She didn't understand English, the language in which classes are taught. But slowly she learned.

At first, she wasn't sure what the daily worships in the school dormitory were about. But little by little Alisha learned about Jesus and began to love Him. She discovered that worshipping God was at the heart of her new school.

Often Alisha's friends talked with her about God. Alisha knew that if she became a Christian, her parents might disown her. In spite of this, Alisha and one of her friends took their stand for Christ and were secretly baptized.

When the girls go home for school holidays, they meet together to talk about God and share what they've read in their Bibles. They're careful to speak in English so that their families won't know what they're talking about. Alisha hides her Bible so her parents won't see it. Alisha knows that she will face many challenges in the future because of her decision to become a Christian. But she know that God will lead her. She thanks God for leading her and her friend to a school where they could learn about the living God and His precious Son, Jesus.

Narrator: Adventist students have many opportunities to share their faith with their classmates. Sometimes they share one-on-one, and other times their faith shines through their actions. Recently some students faced a Sabbath challenge, even while studying in an Adventist school. Their faithfulness helped many others see that God does answer prayers.

Reporter 2: Jincy [JIN-see], Cibin [see-BEEN], and Remya [REM-yah] are students in southern India. At the end of the tenth grade, students who want to continue their studies must take a government-administered exam.

The government exam date was on Sabbath, and the principal worked hard to get an alternate date. It looked hopeless, but the three students insisted that even if they had to repeat the year, they would not dishonor the Sabbath. The principal went to court on behalf of the students, and finally the judge agreed that the students could take the exams after Sabbath.

On the day of the exam, while non-Adventist students entered the classroom where the exam was to be given, Jincy, Cibin, and Remya went to church. After church the three presented themselves to an exam supervisor who placed them in a classroom so that they couldn't talk with any students who had already taken the exam. The three faithful students spent the afternoon singing, praying, and reading their Bible. "It was the best Sabbath I've ever had," said one of the students. "We felt God's presence with us, and we knew He was with us."

Then, after sundown, the three students filed into the exam room and sat down to take the test. The students should have been tired, but they felt refreshed as they completed the exams.

When the exam results were issued, the three faithful students learned that they had scored higher than the other students who had taken the exam earlier in the day. God blessed these students' faithfulness.

The local newspaper printed a story about the three faithful students, and many people learned about the Sabbath who might otherwise have never heard of God's command to keep the Sabbath holy. Some people have asked them why the Sabbath is so special, and the three young people can explain the precious blessings of the Sabbath to them.

"My parents supported my decision to keep the Sabbath," Remya said. "They promised to pray for me during the exam. As a result, we all did well, and the outcome was honorable to God." The school plans to build a classroom block on their campus that can accommodate the special government program in which these students are enrolled. Then all Adventist students in the program can study on an Adventist campus and take their exams on days other than Sabbath.

Part of our Thirteenth Sabbath Offering will help build classroom blocks at two Adventist schools in the Southern Asia Division that will enable more young people to study there and learn that Christ is not a god, but the only true God.

Narrator: Outreach in southern Asia is moving forward rapidly, thanks to the help of Christian education and active lay evangelism programs. But lay workers' programs as well as the organized departments of the Southern Asia Division need a place to gather for all-important training sessions. This need is being met in central India with the construction of the new Pioneer Memorial Training Center and Conference Center, which will help cut the costs fo important division-wide and departmental gatherings.

Our weekly mission offerings help people around the world learn of Jesus, people who might never hear if we don't help them hear. But today, on Thirteenth Sabbath, we can bless the Southern Asia Division in its efforts to strengthen its members to reach out to others.

Today our offering will help build dormitories at two Adventist schools, and classroom blocks at two others, so that more students can study and learn of God's love for them. It also will help finish construction of a division-wide training center/conference center where pastors and lay workers alike can learn more effective ways to lead others to Christ. Let's do all we can to help lift up the arms of our brothers and sisters throughout the Southern Asia Division today. Let's give generously so that more can hear the gospel for the first time in their lives.