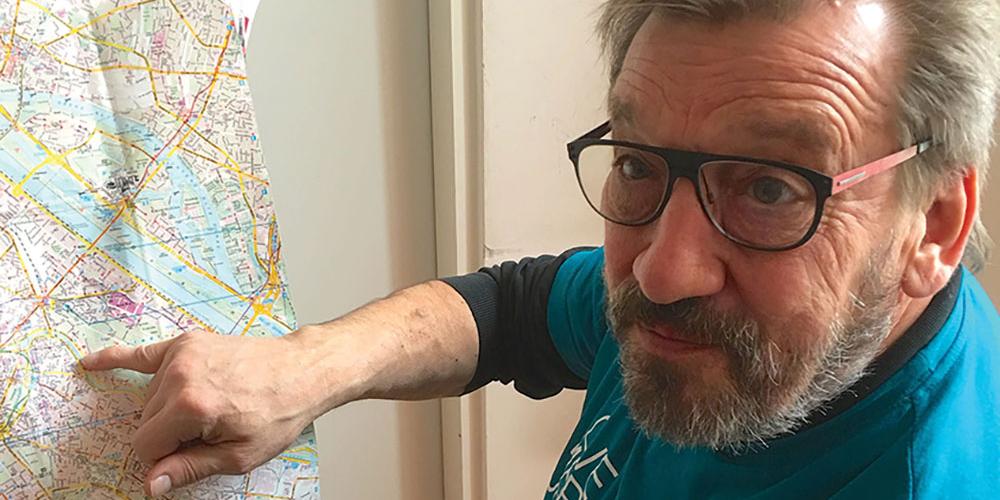 The homeless community is very social, explained Ferdinand. Word spreads quickly about where to find necessities such as free food and clothing.

Ferdinand hadn’t always slept with the beavers. For most of his life he lived a normal life in the famous city of Vienna, Austria. But then business went bad, his income dropped dramatically, and Ferdinand decided to drop out of society and live on the streets.

Grabbing a sleeping bag, Ferdinand left home and found a spot along the Donau Canal, the southern branch of the Danube River flowing through the heart of Vienna and regulated as a water channel since 1598. It was there, on a grassy slope beside the canal, that Ferdinand became acquainted with the beavers.

Usually the interactions were friendly, but one night Ferdinand heard a chewing noise close to his head. “I saw that the beaver was under ‘my’ tree,” recalls Ferdinand. As the beaver continued gnawing on the tree Ferdinand pleaded with him, “This is the last thing I have. Please take another tree.” The beaver obeyed.

Some weeks later, when government landscapers tried to capture the beaver, Ferdinand repaid the animal’s kindness. “I made sure that the beaver was in another place so they couldn’t catch him—and they never did!” he said with a grin.

Ferdinand’s day started with a quick wash in cold water from a nearby well. He then visited a local shelter to receive a free cup of coffee, before heading off to the city library where he read all day. In the evening he went to another shelter to receive a free dinner. Afterwards, he slipped back to his spot along the Donau canal to sleep. The next day the routine repeated.

The homeless community is very social, explained Ferdinand. Word spreads quickly about where to find necessities such as free food and clothing. That was how Ferdinand first came into contact with Seventh-day Adventists. Word on the street was that the best clothes were at the ADRA (Adventist Development and Relief Agency) Center in Vienna.

Ferdinand visited the center and found not only good clothes but a hot lunch as well. He also met Evald, an Adventist pastor.

“If you need help,” Evald told Ferdinand, “I’m here. But you decide.” Ferdinand appreciated the pastor’s no-pressure approach. He continued visiting the ADRA center and before long the two had developed a close relationship.

During the next six years, Ferdinand and Evald enjoyed many lively discussions together about life, religion, and God. Gradually, Ferdinand’s thinking began to change and so did his life. He became more open to re-integrating into society and started to realize his need for God.

One day in 2014, Pastor Evald asked, “Ferdinand, what can we do here for the homeless?” Happy that the pastor had asked for his input, Ferdinand seriously considered what else might be done to help the homeless. “It took me three months to settle on a project,” he recalled. “Then in September we started it.”

The pastor spoke with Marcel Wagner, the ADRA-Austria director, telling him about Ferdinand, the changes taking place in his life, and his potential for leadership. Marcel met with Ferdinand and was impressed. “After our first talk, I realized that he had a vision for this center of influence. We encouraged him to start his project and gave him the space to work here. He’s now part of the staff—a paid ADRA project manager.

Ferdinand’s project involved two aspects. He explains, “We offer the homeless breakfast on Sundays, and this is a bridge for us to also invite them to a Bible study group that we started on Saturday afternoons.”

Under Ferdinand’s leadership, the center of influence has grown tremendously. In just a matter of months the center continued to expand its services to the homeless, refugees, and other people in need. In addition to the Sunday breakfast and Sabbath afternoon Bible studies, hot lunches are provided on Tuesdays and Thursdays. Clothing is distributed to men on Tuesdays and to women and children on Wednesdays.

“He’s giving the people here the respect they need to go on in life,” explains Marcel. “He was himself on the street and he knows exactly their needs. Because of the way he treats them, people love coming here, and we have no trouble. There are no arguments or fights—it is a totally different atmosphere than some of the other places.”

Ferdinand regularly attends one of the Adventist churches in Vienna. He also coordinates the 65 volunteers who come to help at the center.

“Another part of our job is to bring people from our church and work together as volunteers,” says Ferdinand. “The church members bring their non-Adventist friends and they work together.”

“Before Ferdinand came, the teams from the churches would come and have their projects, but now they mingle and work together with others,” Marcel adds. “He’s appealing to the pastors to work together beyond the church family.”