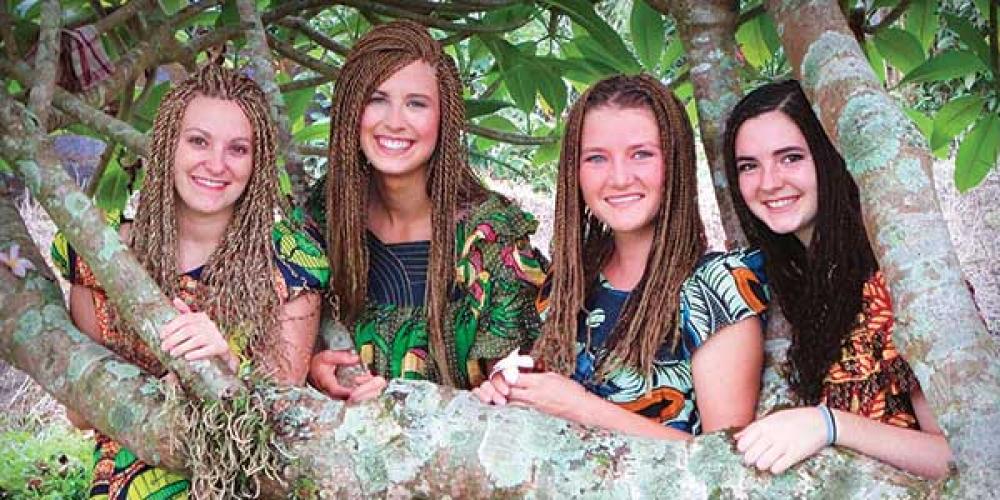 Sharing God with the World

God opened the door for me to come to Buea. Here, every single day presents another first experience and once-in-a-lifetime opportunity.

As the taxi sputtered, choked, and died, we rolled to a stop on our way up the hill towards the school. We all got out and pushed the little car backwards, forwards, and backwards again until we had it turned to point down the hill. Our pushing set it sailing down the hill and our driver jumped in, ignored the oncoming taxis that swerved to avoid him, and used the momentum to pop the clutch several times before managing to restart the ailing little car. Dark exhaust billowed out of the yellow car as it reached us and we all got back in to continue our trip as though nothing unusual had happened. It made me smile and wonder just how many of Buea’s taxis would still be on the road if we didn’t conveniently live on a mountain and have gravity on our side.

God is so good! This has been the most unbelievable year of my life. My name is Tabitha. Back home in North Dakota, I go by Tabby; however, here I have learned to introduce myself as “Tab-ee-ta.” I didn’t choose to serve in Cameroon; I had been through the volunteer process before and the doors had been closed for other options. Finally, God opened the door for me to come to Buea. Here, every single day presents another first experience and once-in-a-lifetime opportunity. I am continually reminded that God is at work and is blessing me while using me to bless others. I thoroughly enjoy my kids at school and my after-school tutoring. I absolutely love hearing “Auntie Tabeeta” shouted excitedly when my students see me at school or on the street. They are precious children and working with them is a blessing.

My first day of school was an experience I will never forget. Teaching practices here are far different than in the U.S. Everything, down to the smallest detail, surprised me. When it was lunch time, Madam DaRootsie, the teacher, sent two kids out with a bucket to fetch water. When they returned, the other students formed lines to wash their hands. Then, they formed a line in the front of the classroom to get tea and a biscuit from the teacher’s desk. The “tea” was in a bucket in front of the desk, and each student dipped a plastic mug into it. The teacher instructed one of them to help me wash my hands and another to get me some tea. I did as I was told, totally confused and disoriented. When I sat back down, there was a cup of hot milky liquid waiting there for me. I had no idea what it was and really no desire to drink it. She motioned that it was for me, so I thanked her and cautiously took a sip. It was delicious! Everything about the process gave me anxiety, and when I saw a student pick up the bucket to pour the remainder into her cup, I couldn’t help but notice the spider which was smashed at the bottom of it. The bucket reminded me of one I would use to carry water to the chickens back on my farm in North Dakota, but here we were, an entire class, drinking something out of it ourselves.

When recess rolled around, the children went wild. It started with a handful of them who stood by me in the doorway, trying to sneak their hand into mine in place of the other who was already holding it. On the playground, I instantly became a celebrity! They crowded in so hard that at times, I thought I was going to fall over. I was desperately trying to organize a game and got as far as making them form a circle. My efforts were useless because the obedient ones would make the circle, while the rest would continue to hang on my waist and pull my arms down to grasp my hand for all they were worth. Finally, everyone gave up on the idea and resumed pushing closer to me. I tried to move to the other side of the playground, fighting to stay upright with every step. The mob of students around me was getting more and more out of control. I felt embarrassed and self-conscious, not wanting anyone to see the commotion. Suddenly, another teacher came over and scolded the children. He grabbed a branch off a nearby tree and used it to chase them away from me.

Next thing I knew, a little girl had produced a beautiful African flower and held it out for me. I was touched and graciously accepted. Then I looked up and saw that the crowd that wouldn’t leave my side had descended on the gorgeous flowers that bordered the school building. I quickly tried to reprimand them to make them stop picking flowers, but it was useless. I was soon surrounded by fists of flowers, but I couldn’t even accept them because my hands were continually being held down by other students. I made my way to the doorway and tried to enter the school without the children following me. They tried, but I instructed them to go play and I would return. I had to repeat the instruction several times before it made any difference, and I quickly made my escape to classroom 3A. Before I could cross the classroom, two of my admirers had discovered my location, and the number multiplied quickly. I tried to calm the chaos by asking the children to teach me words in French. They complied and then played with my hair and patted my arms admiringly. I felt my thin hair, which I have often complained about, and looked at my white skin, which I have always wished was darker, and was so moved. With each compliment they gave me, I told them how beautiful they were. What a sad irony that God made each of us so unique and beautiful, yet we spend our whole lives wishing we could change or alter our features.

Someone rang a bell signaling the end of recess and it took much convincing on my part to get them to join their respective lines and groups. Inside, I had trouble gaining control of the classroom until Madam DaRootsie came in and got them to obey her with one word. Class went on as normal. When school let out, I received farewell hugs from a handful of students who were waiting for their ride home. I had been dropped off at school that morning by the superintendent. Getting home was now up to me, so I decided to walk. I had tried to pay attention on the way to the school, and now tried to recall landmarks, or remember turns and directions. When I finally was able to reach our neighborhood, the traffic of cars and people had thickened since it was market day, and I began the normal weaving through shops, taxis, and people until I reached the familiar haven of our compound.

I am constantly taking pictures and video clips, and trying my very best to remember every detail so that I can tell my friends and family what it’s like here. I get overwhelmed just trying to write in my journal because there is so much I want to record and remember. Once, while we were walking along one of Cameroon’s white sand beaches, I had a dozen mental notes and images floating around in my head. I was trying desperately to remember them just long enough to get to my journal. Suddenly, a new thought entered my mind, crowding all the others out.

Every day, I try so hard to capture my African experience as vividly as possible because I have such a passion to share it with friends and loved ones back home. I realized that if I had nobody to send these pictures to, I wouldn’t have taken a single one. My experiences would feel empty and pointless unless I have someone to share them with. That is when God connected the dots in my mind. When He works in our lives we should have the same passion to tell the world! Without someone to show and tell, I would have ignored most of the beauty in my African experience so far; but because I want to capture it and convey it the best I can, I notice and treasure every little detail. I wish there was some way to convey how amazing these things are, but I really just can’t capture it in words. It’s the same when God is working in our lives. If we don’t share the amazing things He’s doing in and for us, we will be prevented from blessing others. No matter where you are in the world, your surroundings are a mission field, and there are incredible things happening in and around you. So, I challenge you to do your very best, though you can’t fully capture it, to tell everyone what God is doing for you!

Tabitha Joy Schumacher, originally from the United States, served as a Nurse, Teacher, and Tutor at the Buea Adventist Hospital in Cameroon. She served from September of 2011 to May of 2012. Tabitha writes, “Often I’m tempted to feel that I am not needed and not making a difference, but then God points out where I’ve touched a precious child’s life and I realize that even if I only make a difference to one, it’s all worth it!”