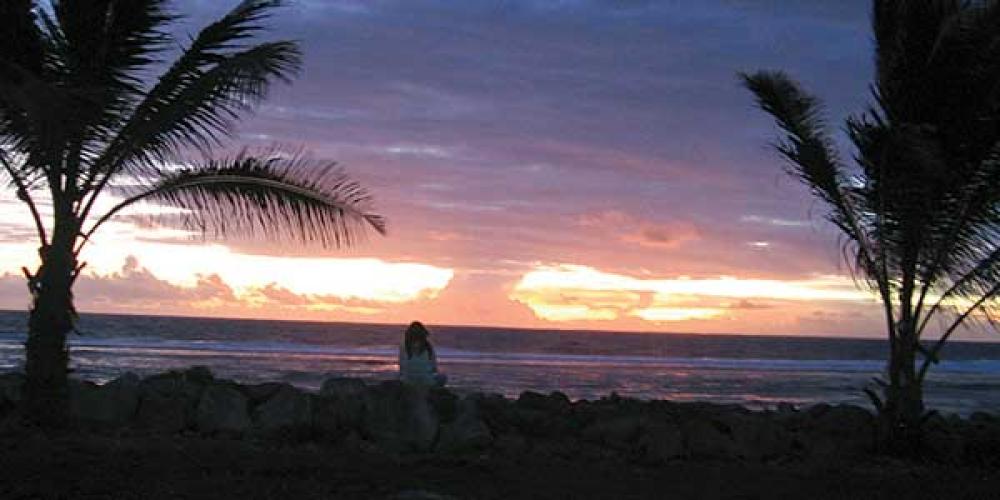 More often than not, I find myself stumbling and crawling through life; but those are the moments that have defined me and have taught me the most.

As I stared out at the ocean, looking but not really seeing, I felt the rest of the world slipping away, and my past, the ghosts of time, invaded my mind and clouded my vision. “God where are you? You’re supposed to be protecting me!”

Tears were streaming down my face. When I had thought about leaving my homeland and fleeing to a tiny island, generally unheard of, I hadn’t considered that my ghosts would follow me and all my skeletons would come tumbling out of the closet, affecting my friendships here and my ability to teach. I had hoped that they would stay in America, so that I could forget the mistakes I had made before and all of the pain I had left behind. Somehow they had caught up with me and were shattering my so-called stability at full force. The worst part of it was that God was allowing it, He was allowing me to drown, and I couldn’t understand why.

We are our own worst enemy. My infected mind was telling me that I didn’t belong here, that I wasn’t worthy to teach, and that no one seemed to care whether or not I was here anyway. So what was the point? I should just leave, but then where would I go? I felt like such a fraud. My mind continued to attack me.

I was on a beautiful island, supposedly “living the life,” and yet I felt a darkness hovering over me. That’s when I began to realize that I needed to make some major changes on the inside about how I approach issues in my life. I couldn’t do it on my own; I wasn’t superwoman. I began to understand that no matter how far I ran, I could never run from myself.

As I remained on the rocks and stared into the ocean, I felt completely alone and vulnerable; the only one I could truly depend on was God. I pulled my muumuu around me tight and hugged my knees to my chest. Then I began to sing. No one could hear me or critique my voice; I was singing to God and God alone. For the first time I understood what it felt like to truly let go and immerse myself in worship. I felt an overwhelming sense of peace surround me, and the morsel of hope that I was clinging to began to bloom. Tears continued to stream down my face, but I was beginning to feel stronger, more open to God’s will.

Four years have passed since I answered God’s call to be a volunteer in the beautiful Marshall Islands. Reflecting back on my experiences, I realize how much of an impact those 10 months had on my life and continue to shape who I am today. At the time, I couldn’t see that by allowing my demons to surface, He was helping me. He was exposing the façade that I had created and was showing me that there was a better path – one that required honesty. I needed to be true to myself. No more lies.

I’m still getting to know myself – my strengths, my weaknesses and what I’m passionate about. Sometimes understanding and following what God wants for my life is as clear as mud, but somehow I have always managed to grasp a tiny seed of faith and there is always hope in close reach. More often than not, I find myself stumbling and crawling through life; but those are the moments that have defined me and have taught me the most. They have strengthened my character and beliefs and reinforced my foundation of trust in God. A good friend once told me that we are on this earth to learn. We may stumble, we may fall lower than we ever thought possible; but we should take it as an opportunity to grow. Who knows? We may discover something beautiful about ourselves and most of all, about the God who loves us.

Janelle Churchill, originally from the United States, served as a Kindergarten Teacher for the Delap SDA School in the Marshall Islands. She served from July of 2007 to June of 2008. Janelle feels that we grow as Christians when we help others, bettering ourselves in the process, and maintaining a close relationship with God.