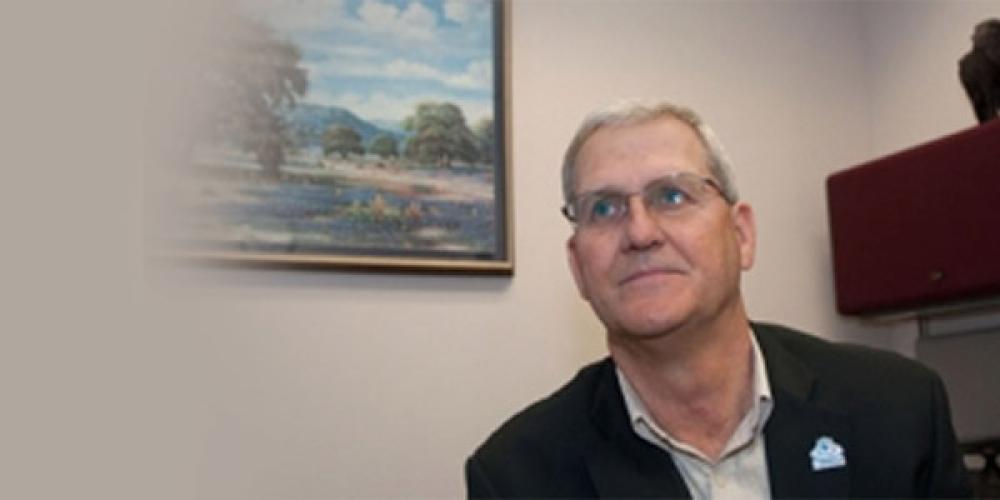 The North American Division still sends more overseas volunteers than any other division.

Silver Spring, Maryland
Last year was the first time that overseas volunteers coming from North America were fewer than all the other divisions combined. In 2008, North America sent 443 volunteers, which was then about 59 percent of the denomination's world total. Last year that number had dropped to 341, or 48 percent of the total number of newly processed volunteers.

John Thomas is director of the Adventist Volunteers program based at the denomination's world headquarters. He says there is a need for more volunteers, as well as a need for more local church administrative units to apply to have volunteers. [photo: Ansel Oliver]

The trend highlights both the gradual decline of numbers of North American volunteers and the growth of mission programs in other divisions, such as South America and South Pacific.

Thomas, 59, who also serves as an associate secretary of the Adventist Church world headquarters, is also trying to let more locations know they canarrange to get volunteers. Doing so would draw more volunteers overall.

Just back from a 26-day trip to Africa to check on mission projects and promote volunteer programs, Thomas met with ANN in his office. The long-time academy principal and missionary discussed trends and challenges, as well as how North America can get its numbers back up to its peak. Edited excerpts:

Adventist News Network: What kinds of trends are you seeing?

John Thomas: There's a big interest in volunteers coming out of Central South America who don't have conversational English. So it's a matter of finding locations where they can go, especially Portuguese-speaking, because there are a limited number of Portuguese-speaking areas around the world. Unfortunately Brazil is predominantly Portuguese. Argentina is very bilingual, even many of their schools systems use both Spanish and English. Brazil is locked into Portuguese, which is limiting their younger generation's ability to integrate into the world.

ANN: Why do you feel the numbers from North America are so significant?

Thomas: Its volunteers are very valuable because they're useful, by which I mean they come from an educational system that is so diverse. They're taught a variety of subjects and skills, which can make them more adaptable. And right now the number of volunteers from [North America] are actually half of what they were not long ago. In 2004, North America had 471 volunteers processed that year. In 2011 they had 215. That's actually less than half. So North America's numbers seem to be going down while the rest of the world is on its way up.

ANN: So what can the church do?

Thomas: More promotion. When you look at the recent figures and see that North America's numbers have gone from the 400s to the 200s, it indicates that there needs to be a vigorous promotion of the volunteer program within the division. When I see and hear what's being done in other divisions, particularly South America and South Pacific where the volunteer programs receive a very high profile within the Adventist network, there is work to be done in North America.

ANN: Full disclosure, I was a student missionary in Micronesia. At orientation in Hawaii it seemed that Walla Walla [University in Washington] had sent more volunteers than any other college or university. Why do you think that was?

Thomas: Some campuses have developed their own network of support for generating interest in the Guam-Micronesia Mission. Not just Walla Walla but also Union [College in Nebraska] and Southern [Adventist University in Tennessee]. They have active personnel within their chaplains office who develop and promote volunteering. And their numbers show it.

ANN: What types of volunteers are you talking about?

Thomas: Many are college students. Others are adults and even many retirees. Overall these are volunteers going abroad for a year or two. Some even extend their term of service. But we're not talking about week-long short-term mission trips or a long-term [inter-division employee] for five years.

ANN: Where are the big needs now?

Thomas: Guam-Micronesia Mission is about 40 people short of what they would like right now for their network of schools. There have been a few bad experiences, and even some tragedies, including the well-publicized death of Kirsten. Volunteers who go there or anywhere should stay within the established guidelines at the mission or institution and that will reduce the likelihood of something bad happening to them. There's a big need for nursing instructor volunteers, educators, accountants, doctors and information technology people. We also need new locations that can accommodate non-English-speaking volunteers. Every place I go in the world I encourage church leaders to set up more locations for volunteers. That doesn't mean they'll all get filled, but the more location options we have will be better. The interesting thing is that the easiest places to fill are places with the most difficult living conditions. Take Bere Adventist Hospital in Chad in Northern Africa – it's hot, there's no Internet, there's nothing.

ANN: Why do people want to go those difficult locations?

Thomas: I don't think I've put my hand on it. Maybe they see it as the ultimate service opportunity. And there's a high percentage of those who serve who come back and finish college or professional school and then head back out into the mission field.

ANN: The other day you mentioned there are particularly a lot of young women on the waiting list to serve. Why is that?

Thomas: We haven't examined it, per se, so I'm only guessing here, but I think a lot of young adult females in developed countries recognize that the lifestyle they are wrapped in right now can be detrimental to them and they feel an urge to go someplace where they can break away from all those things and, as it were, start again. I think the girls are a little more ready to be of service for the needy and get more meaning out of life. The guys tend to want to go to a place that's adventuresome.

ANN: What type of person does it take to be a student missionary or an overseas volunteer?