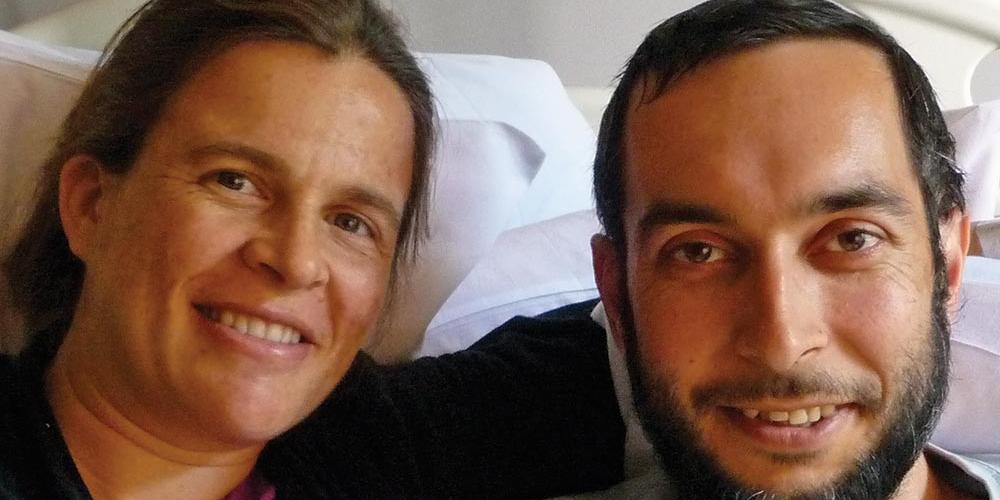 It was hard for me to pray. I knew that we were asking for a miracle.

During morning hospital rounds I could smell something putrid even before I went into the room. It took self-control not to wrinkle or cover my nose. The man in the bed, whose skin should have been a deep, rich brown, was a sickly yellowish-gray. He was emaciated, and his head seemed too large for his body. The large gauze bandage wrapped around his protruding abdomen was insufficient to contain the weeping ooze that lay beneath, so it leaked onto the sheet.

“How you keepin’ today, Brother Thomas?” asked Dr. Sonii. In optimistic Liberian fashion, Thomas replied, “Tryin’ small small.” But, he did not smile.

Dr. Sonii tried to encourage him. Plans were progressing nicely to have him flown to Europe to treat the large tumor eating his abdomen. Seventh-day Adventist Cooper Hospital does not routinely refer patients for care out of Liberia (there’s no funding for that), but a former employer of Thomas had heard of his plight and arranged for care in Italy.

Dr. Sonii assured Thomas that the surgery technician would come soon to change the dressing.  And that, hopefully, this time there would not be so much bleeding. Once outside the room, Dr. Sonii told the nurse to check another hemoglobin blood level after giving Thomas two more bags of blood. He shook his head and looked at me. “His depression is making him weaker. He can’t give up. He has this fantastic chance to go for help, but I think we need a miracle!”

Currently, in Liberia, there is no cancer care other than surgery to remove tumors. At Cooper, we couldn’t even do a tumor de-bulking surgery because we had no surgeon and no idea of the reach of the cancer tentacles in Thomas’s belly. We were trying to keep him alive and stable long enough to get him to Italy. Several times we attempted to send him off, but each time something went wrong—the airline didn’t have a seat for medical transport, he needed more blood, or the flight was canceled. Every day he weakened. I could see that his flagging spirit was sapping what little energy he had left to fight. Hold on! Hold on! I cried in my heart.

Finally, the blood hemoglobin level was high enough and Thomas was scheduled for a Sunday morning flight. On Sabbath, I asked the nurses if they would be willing to join me in praying with Thomas, and they agreed.

When I arrived at the unit, I found them digging through the hymnal trying to find the “perfect blessing song.” They stopped their work, leaving one nurse’s aide to tend the nursing station, and we all trooped to Thomas’s room. He was so pale and tired that he didn’t speak. His wife sat on the other bed. Her eyes welled with tears when we explained that we came to send him off with a “Seventh-day Adventist Cooper Blessing.” We sang, “God will take care of you, through every day, o’er all the way. Lean, weary one upon His breast. God will take care of you.” Then, the nurses and I prayed.

It was hard for me to pray. I knew that we were asking for a miracle. We were also asking for strength to accept human frailty and rest in the belief that there is a purpose for each of our journeys that is beyond our understanding.

And so Thomas went to Italy. I admit that I didn’t have much hope. I feared that he would arrive there only to be told that there was nothing they could do. I believe in miracles, but not that they happen whenever we want them to or that they always come in the form that we conceive. Prayed-for people often die. Still, the experience of singing and praying with the nurses and aides was powerful for me. I could only guess what it might have meant to Thomas and his wife.

Months of busyness gradually muffled the experience in my heart. Five months later I was in the crowded emergency room to monitor the nursing student I’d assigned there. In the bedlam, a man approached me, his face visibly brightening as he hastily extended his hand. He clearly knew me. I put out my hand reflexively but must have looked uncertain. “You don’t recognize me—do you!” he said with a robust laugh. “I am Thomas!”

There was no resemblance in this man to the Thomas I knew. The man before me looked hearty. He looked as if he’d just come in after a nice brisk walk down the beach. My mouth fell open. I couldn’t help myself. I hugged him. Thomas’s wife stood behind him, laughing happily as he embraced the staff.  “When Thomas got off the plane,” she remarked, “he said, ‘Take me to Cooper Hospital.’”

There are miracles! Sometimes God uses doctors and nurses and modern medicine to work them. And, sometimes, when a volunteer missionary’s faith needs boosting, He uses the people the missionary came to serve to strengthen it.

Originally from California in the United States, Becky Carlton Dice met Thomas when she served as a volunteer nurse-midwife consultant at Seventh-day Adventist Cooper Hospital in Liberia.