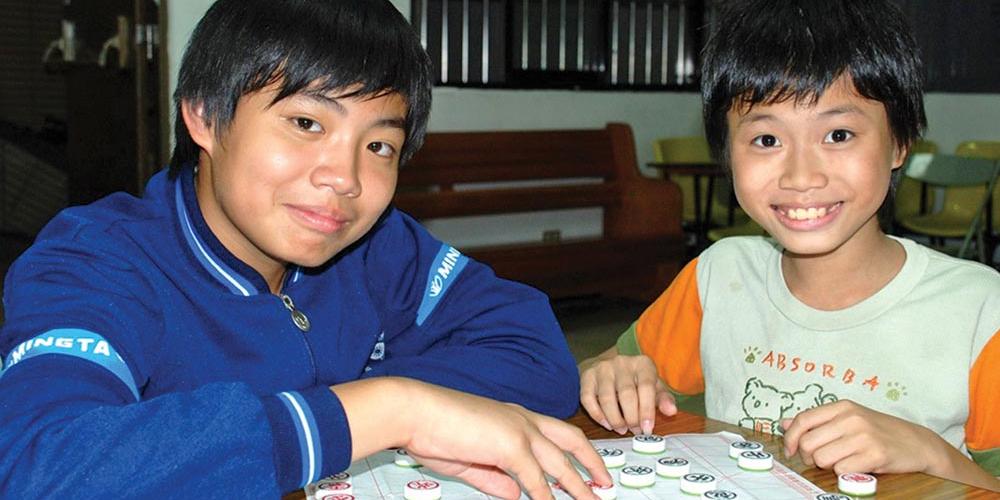 “At church we are taught that Jesus is our example, and we want to be like Him.”

Duh and Yu live with their father in a tiny one-room apartment in a large city in Taiwan. The brothers’ mother died when they were small. Their father feels bad that he can’t work at a steady job and provide well for his boys. Often they go to school hungry. But the boys love their father and don’t want to live with someone else.

After classes, Duh and Yu go to the after-school center in the Adventist church across the street from the school. There volunteer teachers help children with their homework and provide a hot meal.

“I like coming to the after-school center,” Yu said. “It’s fun to play games when our work is done, and the food is good, too.”

Duh and Yu aren’t Adventists. But on Sabbath the children from the after-school center return to the center to attend children’s church. “I like learning about God,” Duh says. “And we get lunch, too,” he adds with a smile. The brothers stay at church all afternoon for worship, Pathfinders, and an after-sunset playtime.

They especially enjoy Pathfinders and are proud of the honors that they’ve earned. Although their father isn’t a Christian, he gladly allows them to attend the church’s programs because he knows that they’re learning to be good citizens. The lessons they learn at church and in Pathfinders have made a big impact on the boys.

Last year when Duh and Yu and two girls from the after-school program were walking to the library, Duh found a small cloth bag filled with coins. “It’s not ours,” one of the children said, so they took the money to the nearby police station.

The police officer listened to the children’s story. He took their names and addresses, and then he emptied the bag to count the money. It was more money than the children had ever seen.

The next day a newspaper reporter interviewed the children about the money they’d found. “We learned to be honest at the church and in Pathfinders,” Duh told the reporter. “At church we are taught that Jesus is our example, and we want to be like Him.”

No one claimed the money, so the police officer gave the money to the children’s school to help pay their school fees.

Although the children are poor, they think of others who have even less. When Yu grows up, he wants to work in an after-school program such as the one the church operates. Our Thirteenth Sabbath Offering last quarter will help support the after-school programs in Taiwan as well as a center for elderly people. Thank for giving your mission offerings!