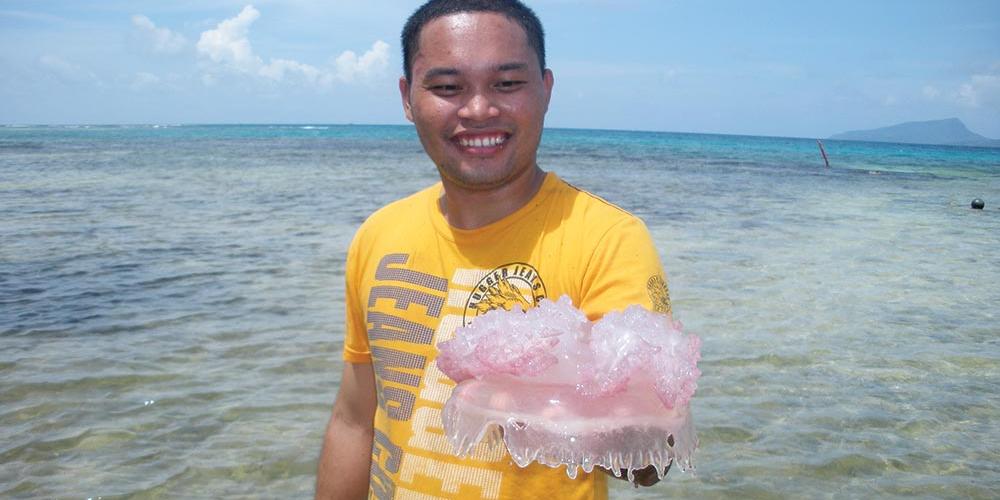 I was in town with several volunteers the day that Junior was shot. We saw the school van rush by with its lights flashing.

I couldn’t take my eyes off the raw scar zigzagging across Junior’s neck. I cried to think of what he’d been through, but I found the mark itself beautiful. It meant my friend was still alive because Jesus answers prayer.

Junior’s brush with death happened the day we had an off-site picnic for our students at Chuuk Seventh-day Adventist School, where I serve as a volunteer. He was about to give our teachers Alfred and Dhen a ride back to campus when three drunk men asked him for a ride. Junior told them no, but they insisted and started climbing on the back of his truck. When Junior jumped out to stop them, they pulled out their slingshots.

Junior rushed for the door, but before he could climb inside to safety, he was struck in the throat by a bullet. He jumped in beside Alfred and Dhen, who were desperately trying to shield themselves with a guitar, and they sped away amid a volley of ammunition.

When Alfred and Dhen realized that Junior had been hit, they urged him to go to the hospital. But Junior drove to the school instead.

“As the security guard, it was my responsibility to protect the teachers,” Junior later told me. “All I could think of was getting them out of harm’s way. Sometimes the bullets used in slingshots have rust or poison on them, and I kept thinking, if we don’t get out of here quickly, none of us may survive.”

I was in town with several volunteers the day that Junior was shot. We saw the school van rush by with its lights flashing, and I called the school to find out what had happened. Several hours later, we went to see Junior at the hospital. He had a calm expression on his face even though the bullet still protruded from his throat.

We stayed with Junior and his family until the nurses took him to the operating room. The doctor spoke quietly with Junior’s family. “This is a very dangerous procedure,” he warned. “I will do everything I can to help your son live.” We left the hospital that night with prayers in our hearts for Junior and his surgeon.

Praise, God, Junior survived! When we saw his doctor a few days later, he told us that there had been no poison on the bullet and that he had prayed for divine help before starting the operation.

I’m so grateful that God spared Junior’s life and that his fading scar tells the story of His loving answer to our prayers.

I was talking with some of my sixth grade students after school one day while we waited for their parents. I was delighted when one of the boys told me that I had helped change the bad attitude of their classmate Gracie.* “Before you came, Gracie was the worst student in our class!” he recalled. The others enthusiastically nodded their agreement.

I had to admit that of all the students whom I’d taught through the years, Gracie had been my greatest challenge.

My mind raced over the many times that I had tried to talk with Gracie about her behavior. It seemed like I never got anywhere. Then one day, after she had acted up more than usual, I asked her whether I could pray with her.

I realized that I didn’t know much about Gracie and felt impressed to ask her a few questions about her family. It was then that I caught my first glimmer of the raw, painful scars zigzagging across Gracie’s heart.

As tears rolled down her cheeks, Gracie told me that she had lost her father several years ago and that she and her sister were being raised by an aunt. Her mother, a heavy drinker, rarely came to see her.

As I listened, I began to realize that Gracie’s behavior was her way of seeking love and attention.

I began to pray with Gracie every day and soon her classmates were praying for her too. I told her often that I loved her but that my love was nothing compared to Jesus’ love for her.

Over time, Gracie began to change. She became cooperative, respectful, and kind. Her classmates, once resentful of her, now embraced her in warm friendship.

I’m so grateful that God gave Gracie a new life and that her fading scars tell the story of His loving answer to our prayers.

* Name has been changed.

Originally from the Philippines, Stephanie Loriezo has served as an Adventist Volunteer Service missionary for the past five years, most recently as a teacher at Chuuk Seventh-day Adventist School in Micronesia.