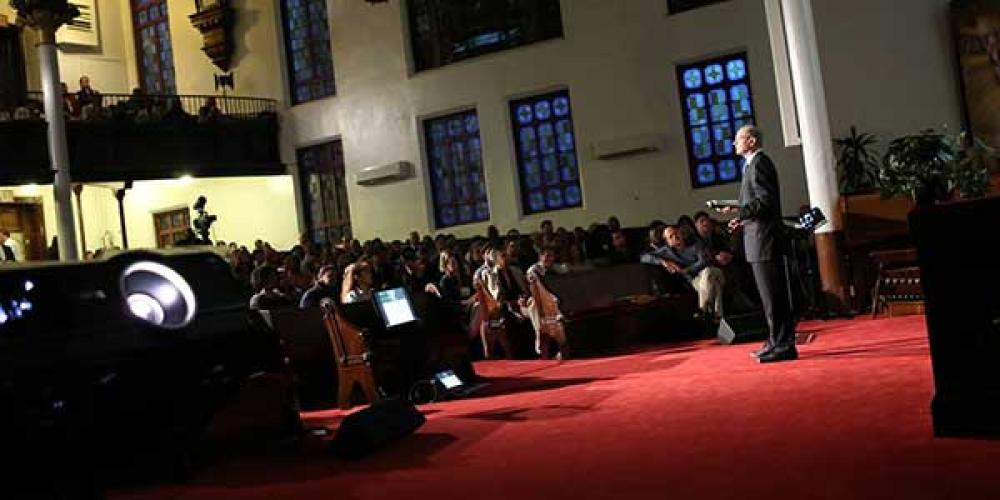 The drenching rains of Tropical Storm Andrea, which deposited two inches of water on the streets of New York’s Greenwich Village, failed to dampen the enthusiasm of people who attended the initial “Revelation of Hope” campaign meeting on Friday evening, June 7.

Sponsored by the Seventh-day Adventist Church, the meeting is one of hundreds being held in metropolitan area during June as part of the denomination’s “Mission to the Cities” campaign.

Already, officials of the Atlantic Union and the two area conferences say 1,100 people have been baptized as Seventh-day Adventists during the months leading up to the event. The NY13 campaign – which features 160 different evangelistic events across the region in June alone – is expected to culminate June 29 at the Nassau Coliseum with a rally attended by more than 15,000 people. The overall effort includes the participation of the Atlantic and Columbia Unions, as well as the Southern New England, Greater New York, Northeast and New Jersey Conferences.

Pastor Ted N. C. Wilson, president of the Seventh-day Adventist world church, served briefly at what is today the Historic Manhattan Seventh-day Adventist Church some 40 years ago when he first began his ministry. Following graduate education, Wilson also worked for several years as a leader of a city-wide ministry in the 1970s.  He returned to the church to open the three-week evangelistic series, with his wife, Nancy, greeting visitors as they entered the lobby. Calling himself a “New Yorker at heart,” Wilson told the audience he had “started ministry right here.”

Inside the 132-year-old church building, more than 500 people gathered in what master of ceremonies Mark Finley called an “oasis of peace” to hear a message which stretched beyond today’s storms.

Tatiana Featherstone, a 20-year-old woman originally from Barbados, said she attended in part because her father, a Seventh-day Adventist, invited her. She added the meeting met her expectations: “It was all good.”

Visitor David Tan, who called himself “a Singaporean retired and living in Thailand,” said Wilson’s message was a “good and clear” introduction to the book of Revelation.

In his message, Wilson declared: “The Bible is amazingly accurate. The Bible is filled with hope for the future.”

He added, citing Amos 3:7, “Surely the Earth’s events are not going to ‘sneak up’ on God. Unlike the dismal predictions of human beings, the Bible gives us hope.”