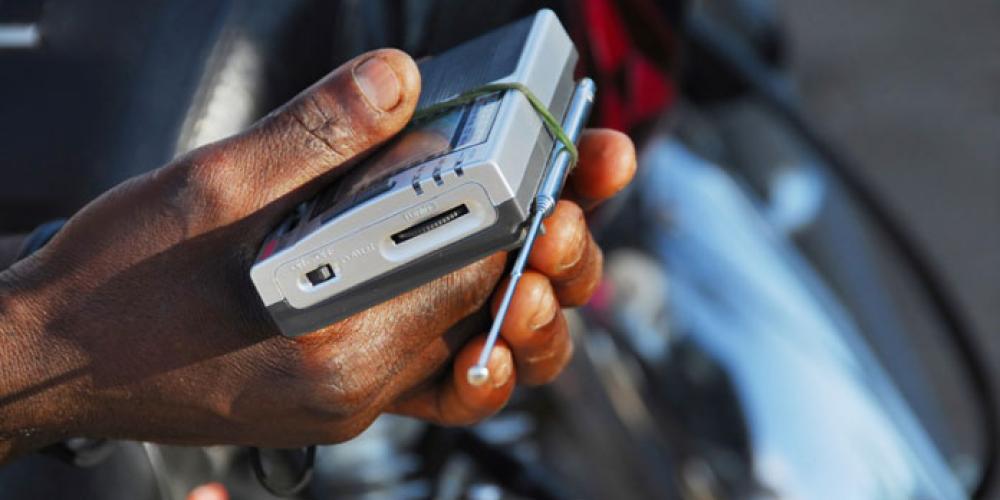 The Adventist Church plans to launch a radio ministry on the compound of its local field office.

Shipping containers here in Juba don't just hold transported goods, they're also used as homes and offices. Even some entire hotel complexes are constructed of the large steel boxes.

In a few months, the Seventh-day Adventist Church plans to launch a radio ministry from a beige container recently installed on the compound of its local field office. The ministry, in development since 2006 at the prompting of a pastor, is meant to connect with a community where traditional outreach isn't possible, church leaders say.

"We are committed to share the word of God with people in this community," said Alumai Dominic, a lay member and chair of the committee overseeing the project. "This message isn't [otherwise] reaching the people outside of Juba. We'll be able to reach other communities."

Years ago, the committee requested a radio frequency from the government and was pleasantly surprised to receive four. They named their flagship frequency 94.0 Salvation FM.

The ministry plans to offer programs about the gospel, health, family and youth issues. Programs will be broadcast in local languages, including Bari, Juba Arabic, Dinka, Muro, Shiluk and Zende.

The project is one of several that the church here is planning for future development and ministry.

Development is the theme here in South Sudan, the world's newest country, where newly gained independence could lead to much needed growth of infrastructure and industry. Poverty is widespread and most residents outside of cities are illiterate.

The former southern region of Sudan became a separate nation a little over a year ago following a referendum that authorized secession. For decades, the south and the north fought civil wars over development funds and representation in government in the northern capital of Khartoum. A peace agreement in 2005 set up a 2011 vote on southern independence, which passed by 98 percent.

South Sudan is a rapidly growing country, with foreign workers arriving daily. Many locals are optimistic about the country’s future under independent rule. Patrons in city restaurants strike up conversations with visitors and tell of their enthusiasm.

“Before we didn’t have many chances, but now we are free. We have money, we can open businesses,” said Peter Guzulu, while dining one recent evening. He said he lived in the United States for 10 years and returned to work for an NGO.

Billboard advertisements riff off the idea of a new nation. Beverage companies invite consumers to enjoy “The taste of progress,” and heavy equipment companies dub themselves “Your partner in development in South Sudan.” Even causes with little connection capitalize on the theme: “New country, new beginning. Take an HIV test today.”

Still, the new nation has huge struggles to overcome. There are about 10.6 million people in South Sudan, and slightly less than 30 percent of the population is literate.
The lack of infrastructure, such as electricity, running water and roads, is daunting. Most vehicles are all-terrain, which are needed to negotiate the bumpy dirt roads outside the inner city. It can take Adventist pastors an hour to reach a district church a few miles away. Many pastors outside the city walk for six to 12 hours between churches.

The Adventist Church is expanding buildings on its main compound in Juba. The compound is the headquarters for the Greater Equatoria Field office, a primary school with about 1,000 students, a clinic, two churches and the headquarters for the Adventist Development and Relief Agency’s national office. This ADRA operation is the largest in the world, employing about 700 staff, but that figure will slim down to about 400 with a major project ending soon, an official said.

The field’s parent East-Central Africa Division will soon build and operate a guesthouse, which will ultimately cost less than having visitors and church leaders stay in nearby hotels.

Other upcoming plans include residences for church officers and a larger field office. Currently, field staff makes do with small and crowded quarters. Morning worship is held in the president’s cramped office with most attendees spilling out into the packed, narrow hall. The speaker sits at the corner of the desk so people in both the office and hallway can see him.

“We make use of the space we have and move forward,” said Field Treasurer Philip Javaid, a Pakistani national who holds a master’s degree in banking and finance. “We still have many challenges. Our facilities for working are limited.” He pointed to the president’s computer, saying, “These are personal laptops. I’m not happy that they’re using personal laptops, but at the moment we don’t have much choice.”

The church in South Sudan is divided into three fields. The Greater Equatoria Field, based here in Juba, has about 9,800 members. The church operates 18 primary schools, and a member runs a weekly prison ministry at the Juba Prison. Each week he holds services with rotating volunteers there Saturday mornings. Prison officials said they see a change in people who attend services.

The upcoming radio ministry was the brainchild of Fulgensio Okayo, a retired pastor who in 2006 threw down the challenge of starting a radio ministry. “People here really want to hear from the word of God. If we use radio we can reach them,” he said. Members quickly bought into the idea and contributed to the project.

Studio equipment has been purchased, eight volunteers are being trained to staff the operation, and a 30-meter mast has been assembled next to the container and is capable of broadcasting to an eight-kilometer radius. Later, an antenna will be constructed on a hill outside of town, capable of reaching the entire capital city of some 350,000 people.

Still, another US$11,400 is needed to launch the ministry, said James Yangi, the committee’s treasurer. To date, members have contributed about US$32,000, he said. He estimates a broadcast launch in about three months, after more contributions trickle in. Subscribers are already committed to regularly contribute for ongoing costs once the ministry begins. Yangi said other local members will likely contribute later and compared their hesitancy to the doubting New Testament disciple.

“We know there are also Thomases who want to see first and then get excited when the ball gets rolling,” he said.

- Ansel Oliver and Steven Bina contributed to this story