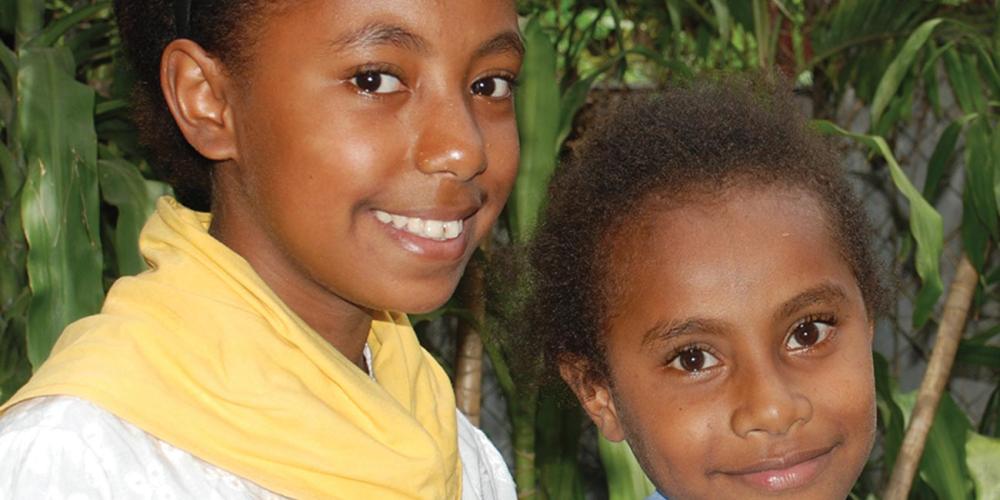 Papua New Guinea has a wide variety of reptiles, marsupials (animals that carry their young in pouches), native freshwater fish, and birds but has almost no large mammals. The largest animals are the cassowaries (large, flightless birds) and crocodiles. It also has
around 40 species of birds-of-paradise.

To Sabbath School teachers: This story is for Sabbath, November 5.

iqui lives in Port Moresby, Papua New Guinea. She is 8 years old, but already she has helped someone meet Jesus. When her church sponsored a Children’s Sabbath, Jiqui was one of four children who spoke for the worship service.

“It was a little hard,” Jiqui says. “I was in the first grade then, and I couldn’t read very well. So, Mother read my sermon to me, and I memorized it. She helped me learn how to speak loudly and how to use my hands for expression. By the time of the service, I was only a little nervous.”

On Children’s Sabbath, Jiqui prayed that God would give her a strong voice and use her words to help someone want to know more about Jesus. She didn’t know it, but someone in the audience was touched by God as Jiqui spoke.

Natasha had never been to the Adventist church before. Her aunt had invited her to the Children’s Sabbath program. Natasha attended church with her parents on Sunday, but the children’s program sounded interesting, so she decided to attend. She had never seen children lead a worship service before. They led the singing and prayed, and four children even preached. She was excited to see the children up front.

Then Jiqui, the smallest child, stood to speak. Natasha listened in amazement. This girl was younger than Natasha! How can such a little girl preach? She wondered. Then she whispered to her auntie, “Mi sala! [I like it!] I want to learn to do that, too!”

Natasha wanted to visit the Seventh-day Adventist church again, and her parents agreed. Since then, Natasha has attended church every Sabbath. She especially likes Sabbath School with its active songs for children and an interesting Bible story every week. “It’s great! I like how the teacher tells us about God in words we can understand. Mi sala!”

Several months later, the children presented another special program. This time Natasha took part. She told the people how a little girl’s sermon had made her want to continue coming to church. Then Natasha called Jiqui to the front and thanked her for her part in the program.

Jiqui didn’t know that her sermon had helped Natasha come to church. She was glad that God had used her words to touch Natasha’s heart.

Natasha looks forward to the day she can preach in church.

“I’ll ask Jiqui to help me,” she says. “And I’ll invite my parents and friends to come. And I’ll ask God to help me tell them more about Jesus’ love, just as Jiqui did when she preached. I think God would answer my prayer. He answered Jiqui’s!”

Jiqui and Natasha want you to share God’s love with others so they can get excited about God. You can do that this week!

Papua New Guinea has a wide variety of reptiles, marsupials (animals that carry their young in pouches), native freshwater fish, and birds but has almost no large mammals. The largest animals are the cassowaries (large, flightless birds) and crocodiles. It also has
around 40 species of birds-of-paradise.