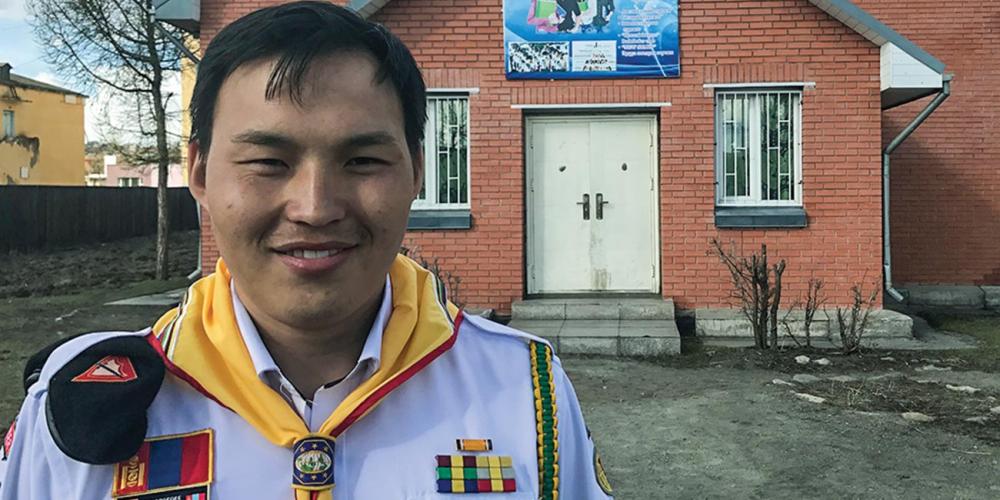 Mongolia is home to the Bactrian camel. Smaller than Arabian camels, their double hump is distinctive.

To Sabbath School teachers: This story is for Sabbath, October 9.

ege was a sick little boy in Mongolia.

Mother took him to the doctor.

“Gege is very sick,” the doctor said. “We will have to amputate his legs.”

Gege was scared. Even though his legs hurt, he ran from the doctor’s office. At home, he told Mother that Jesus would heal him. “What Jesus are you talking about?” Mother said. But she knew what he meant. Gege had been going to a Seventh-day Adventist church on Sabbath.

Mother was not a Christian, and she didn’t like him going to church. She spanked him many times for going, but he still went. Even though Mother didn’t love Jesus, she loved Gege. She begged him to return to the doctor, but he refused. He had read many stories in the Bible about Jesus healing people. “I know that I will be healed,” he told Mother.

A short time later, Gege and his mother moved to another city where the church was a long way from their new house. Gege had to walk 9 miles (15 kilometers) to reach the church and another 9 miles to return home. It hurt his legs to walk such a far distance, but he didn’t mind. He wanted to worship God on Sabbath.

At the church, the pastor told him that the walking exercise was good for his health. The pastor also invited Gege to help take care of the church’s vegetable garden, and Gege began to walk to the church every day. Gege enjoyed tending carrots, potatoes, and cabbage in the garden. He liked eating them, too!

All summer, Gege walked to and from church, tended vegetables, and ate vegetables. Every day he prayed for God to heal his legs.

Three months passed, and Gege lost 65 pounds (30 kilograms) from all the exercise and healthy garden food. He became slim, and his leg pains vanished.

“It’s a miracle and an answer to my prayers!” he jubilantly told Mother.

Mother wasn’t so sure. She saw that Gege was fit and strong, but she wanted to know what the doctor would say. At the doctor’s office, the doctor gave him a clean bill of health. Mother was astonished. “Jesus healed you,” she said.

Today, Gege works as a Global Mission pioneer, a missionary who shares Jesus with other people in Mongolia.

Your Thirteenth Sabbath Offering this quarter will help open a health center in Mongolia so that many people can learn how to be healthy like Gege.

Mongolia is home to the Bactrian camel. Smaller than Arabian camels, their double hump is distinctive.