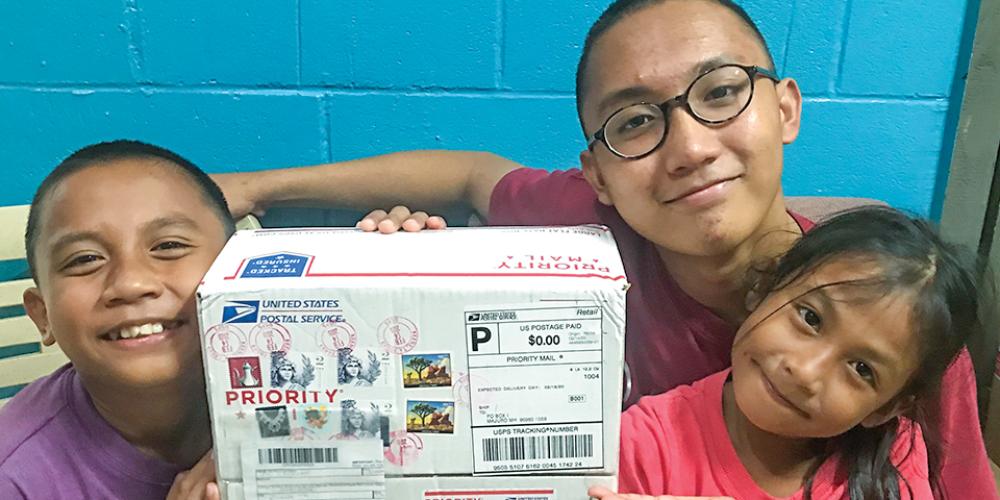 To Sabbath School teachers: This story is for Sabbath, August 7.

The box was heavy, and it came from the faraway state of Texas in the United States. It was addressed to Father, the vice principal of the school. But Father knew that the box wasn’t for the school. It was for his family and other missionaries.

“Please open the box!” chimed in their sister, Jaira, who was 9.

Father smiled at their enthusiasm.

When school ended, the three children grabbed Father by the arms and pulled him toward the door.

At home, the family gathered in the living room around the box.

“This box is a blessing from God,” Father said. “Let’s thank God now.”

The family knelt, and Father prayed.

“Heavenly Father, we are thankful for this blessing that just arrived,” he said. “We are very thankful that You have not forgotten us. Help us to bless others through the blessings that we have received. Thank you for Grandpa Bob and his kindness. Please bless him. Amen.”

With Father’s approval, Raijan grabbed a pair of scissors and tore open the box.

Jehuraian reached his hand into the box. “The blue is mine!” he declared.

Jaira didn’t mind her brothers taking the cars. Her eyes were fixed on a doll and an accompanying set of doll clothing.

“I get the doll!” she said. “And Mommy, I have new clothes for the dolls!”

Mother was peering into the box. A bag of golden chocolate coins caught her attention, and she fished it out.

“I’m not sharing this with you guys,” she said. “I will share it with my students. They need something to motivate them.”

Father looked through the rest of the box: notebooks, pencils, red rice, nuts, and instant mashed potatoes. He would share the goodies with student missionaries teaching at the school. Then he found his favorite: dried pineapple.

The arrival of the first box, three years earlier, came as a surprise to Father and Mother, who moved from the Philippines to teach in the Marshall Islands. Grandpa Bob had learned about their missionary work through mission stories in the Mission quarterly, and he had wanted to help. He put money in the Sabbath School mission offering every week, and he gave extra when a Thirteenth Sabbath Offering was collected to help the school. But he wanted to do more. So he began to send monthly boxes containing toys, food, school supplies, and more.

The boxes often come just when food is running low in the house, when Father or Mother need some encouragement, or when a child has a birthday. Every time a box arrives, the children jump for joy, and Father and Mother praise God for His faithfulness. Then they pray before opening the box. “Thank You, God, for showing Your love for us through Grandpa Bob,” Father prays. “Thank You for Your faithfulness.”

Thank you for your Sabbath School mission offerings that help missionaries spread the good news that Jesus is coming soon. Thank you for being like Grandpa Bob and giving a little extra for mission.