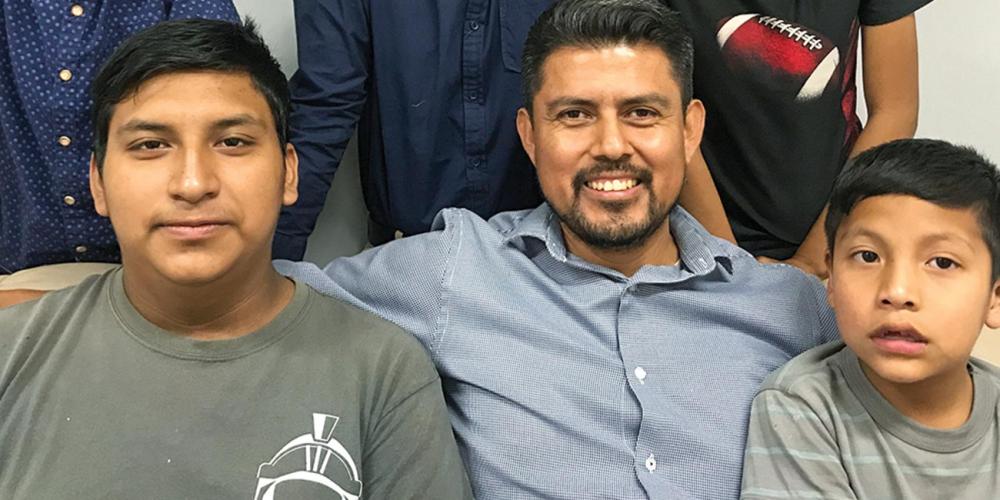 The Thirteenth Sabbath Offering this quarter will help the Inter-American Division to open 13 Better Living centers of influence, one at each of the following:

The Thirteenth Sabbath Offering next quarter will help the North American Division to:

To Sabbath School teachers: This story is for Sabbath, June 26.

he Sabbath School teacher had a big announcement to make to the children’s class in Montemorelos, Mexico.

“I know a boy who isn’t well,” Teacher said. “Let’s go to his house this afternoon to pray with him and give him a gift.”

Teacher thought that a few children might show up at the scheduled time in Los Sabinos Seventh-day Adventist Church. He arrived with a plastic bag filled with canned food and chili peppers to present as a gift on behalf of the class. To his surprise, all fifteen children from the class showed up, and each had a gift. Some had toilet paper and soap. Others had beans, rice, sugar, and salt.

The children rode in two cars to a small house. The house consisted of only one room with two beds. The children found 15-year-old Adrian sitting on one bed. His crutches were resting against a wall. Adrian’s father and 7-year-old brother slept on the other bed. The room also had a two-burner stove and a small refrigerator.

All fifteen children crowded into the room and stood around Adrian’s bed. Twelve-year-old Eli opened his Bible and read Psalm 23. “The Lord is my Shepherd, I shall not want,” Eli read.

Adrian wasn’t interested in listening to the Bible. He had multiple sclerosis and, although he was only fifteen, had suffered several heart attacks. He was worried about his health.

But the words of the Psalm caught his attention. “Yea though I walk through the valley of the shadow of death, I will fear no evil, for you are with me,” Eli read.

A desire was kindled in Adrian’s heart to know more about God.

The children sang a song about God, and Teacher prayed for Adrian.

“Thank you, God, that we were able to meet Adrian,” he said. “Please bless Adrian, his family, and his life.”

Teacher offered to take Adrian to church every Sabbath.

“That’s a great idea!” the boy exclaimed. “I would really like that.”

The children piled into the two cars and headed back to church. They rode in silence. Each thought about how they had nice houses and good health. They felt ashamed for complaining to their parents about small things like not having a hairband or a toy car.

The next Sabbath, Teacher picked up Adrian and brought him to church. The boy immediately felt at home. People warmly welcomed him, and he liked hearing the Bible stories. As the weeks passed, he learned more about God and especially liked the story of Job, who suffered much but never stopped believing in God. He wanted to be like Job.

One day, Adrian’s father called Teacher. “I have big news,” Father said. “But it is not my place to tell you what it is. One minute.”

He passed his cellphone to Adrian.

“I’ve been thinking about something,” Adrian said. “I want to be baptized. What do you think?”

He promised to make arrangements for the baptism.

Adrian handed the phone back to his father. “My son has more courage than me,” Father said, his voice breaking. “I have never been able to make the decision to be baptized.”

The children in the Sabbath School class were thrilled when they heard that Adrian wanted to give his heart to Jesus.

After taking Bible studies, Adrian was baptized as the excited children from the Sabbath School class watched. The boys made a video of the baptism to give as a gift to Adrian.

Adrian is the first and only Adventist in his family, and he is praying that Father, who polishes shoes for a living, will be baptized one day.

“I made the right decision in being baptized because I feel like I am only really living when I am with God,” Adrian said.

The children in the Sabbath School class are real missionaries for sharing Jesus with Adrian, and now Adrian is a real missionary for praying for his father. This quarter’s Thirteenth Sabbath Offering will help open a missionary training center at Montemorelos University, not far from Adrian’s home, in Mexico. Thank you for your generous Thirteenth Sabbath Offering to help students train to become missionaries at Montemorelos University and twelve other universities and colleges in the Inter-American Division.

The Thirteenth Sabbath Offering this quarter will help the Inter-American Division to open 13 Better Living centers of influence, one at each of the following:

The Thirteenth Sabbath Offering next quarter will help the North American Division to: