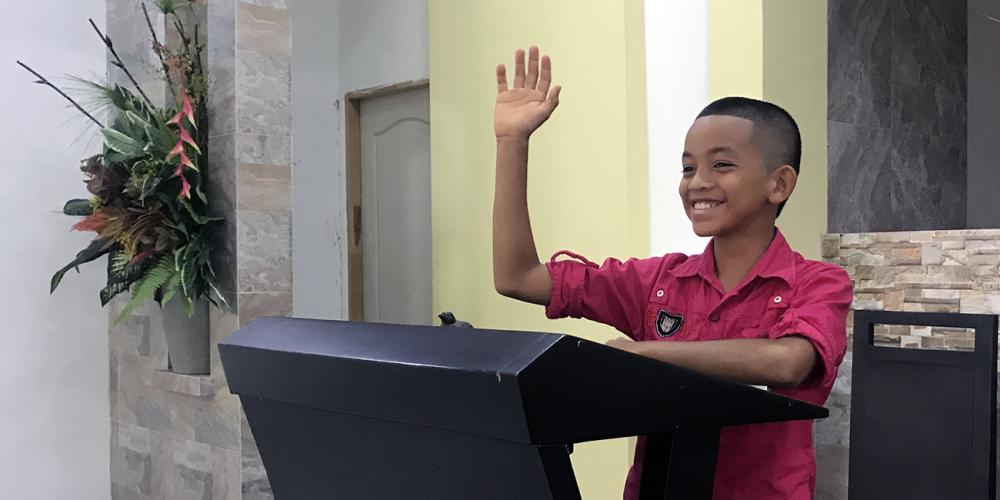 Colombia is famous for two exports: It produces world-renowned coffee and is the world’s leading source of emeralds.

To Sabbath School teachers: This story is for Sabbath, May 29.

hen Gabriel was 6, he saw older children preaching at his church in Necocli, Colombia. He liked to listen to them preach about Jesus, and he wondered what it would be like to preach.

After one Sabbath sermon, he went to Mother.

“I want to preach,” he said. “I want to know what it is like to preach in front of all the people.”

Mother was surprised but pleased.

“Let me ask the pastor,” she said.

Gabriel felt happy that he might be able to preach.

Mother spoke with the pastor right away, and the pastor said he would think about it.

Gabriel decided to prepare his first sermon while the pastor was thinking. He loved the story about how God created the world, and he especially liked how God blessed the seventh day and made it the holy Sabbath. He decided to preach about Creation. He couldn’t read well, so he asked Mother to read the story of Creation in Genesis 1 and 2. Then he found an Adventist animated film about Creation and watched it.

As he waited for the pastor to make a decision, he grew excited about the thought of preaching the sermon that he was preparing. Every day he worked on improving the sermon.

After three months, Father asked the pastor whether Gabriel could preach his sermon at prayer meeting the next Wednesday.

“I’m scheduled to speak,” Father said. “Could Gabriel preach instead of me?”

The pastor agreed, and Father announced the news to Gabriel.

“The day that you have been waiting has arrived,” he said. “You will preach next Wednesday!”

Gabriel was thrilled. “God has given me a time to preach,” he said.

Gabriel put on a nice shirt and arrived at the church carrying a small notebook with his sermon notes. The congregation of 25 people was surprised to see Father place a large concrete block behind the pulpit. They were surprised to see Gabriel stand on the block and preach.

Gabriel felt nervous in front of all the people, but he was very happy. The congregation listened attentively. Before Gabriel knew it, his 30-minute sermon was over. He no longer felt nervous, and he wished that he had something more to say. People left the prayer meeting praising God for the young boy’s sermon.

Gabriel wanted to preach again, and his parents spoke with the pastor. While Gabriel waited for a decision, he prepared a sermon about Jonah and the big fish. Several months later, he preached the sermon at another weeknight meeting.

Today, Gabriel is 12, and the pastors in his hometown have given him the nickname “Preacher Boy.” He preaches once every two months in the three churches in the city. Sometimes he preaches during the week. Other times he preaches a Friday evening sermon for the Pathfinders or the Sabbath sermon.

Gabriel is a real missionary for preaching about Jesus. Part of this quarter’s Thirteenth Sabbath Offering will help open a center to train other missionaries at Colombia Adventist University in Gabriel’s homeland, Colombia.

Colombia is famous for two exports: It produces world-renowned coffee and is the world’s leading source of emeralds.