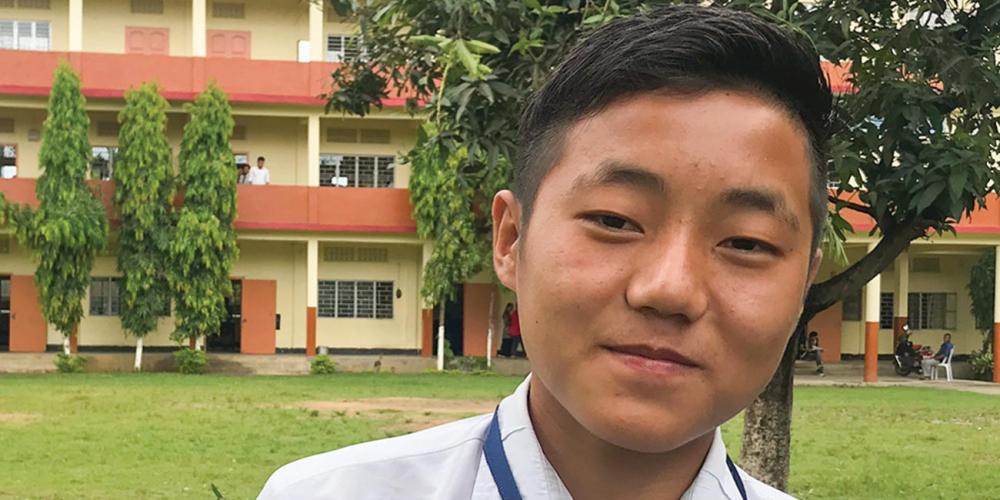 To Sabbath School teachers: This story is for Sabbath, December 26.

Hangbe Poireng started smoking when he was 12 years old.


He tried his first cigarette while enjoying summer vacation in his home village in northeastern India.

The village was up in the mountains, and the weather was cold, even though it was summer. Hangbe was wearing a warm sweater as he and an 18-year-old friend, Luikelung, hung out in an abandoned hut, chatting about nothing.

“Try this,” Luikelung said, holding out the lit cigarette. “Smoking keeps you warm.”

Without hesitating, Hangbe took the cigarette from his friend. He had never smoked, and he didn’t know how to smoke. The smoke tasted nasty, and he coughed.

He didn’t want to smoke, and he gave the cigarette back to his friend. Luikelung took it without a word.

A week later, Hangbe went out on a picnic with five friends. Reaching a field near a river, the friends sat down and started to smoke. Hangbe looked around and saw everyone was smoking. He felt left out. He remembered the disgusting taste of the cigarette smoke, but he wanted to be part of the group. He asked for a cigarette.

But this time Hangbe decided to be clever. He didn’t want to cough and look foolish. So he pretended to smoke without drawing the smoke into his lungs. Nobody seemed to notice that he was faking it. He felt happy to be part of the group.

Hangbe pretended to smoke at other gatherings with friends. Soon he wasn’t pretending anymore. He found that it was easy to smoke.

After summer vacation ended, Hangbe went to Dimapur to live with his sister and to study at a Seventh-day Adventist school. He made new friends who didn’t go to the Adventist school. Those friends smoke, and he joined them. He wanted to be part of the group.

But at school, he heard that smoking was bad for his health. He thought about quitting, but he was addicted. He felt sick and nervous every time he tried to stop smoking.

Hangbe needed money to smoke. His friends couldn’t give him free cigarettes all the time. So when his sister gave money for food at school, he spent it on cigarettes instead. Hangbe also began to spend more time with his friends and he stopped doing his homework. Back in the village, his parents found out that he was doing poorly in school. They decided to send him to live in the dormitory at the Adventist school, hoping the boys’ dean would encourage him do his homework.

Hangbe didn’t want to live in the dormitory, but he had no choice. Now he had a problem. He couldn’t smoke at school, but he couldn’t quit. He decided to buy chewing tobacco, still using money that his sister gave for food.

He didn’t chew tobacco for long. A friend caught him and reported him to the teachers. The boys’ dean called him to his office.

“Whenever you feel tempted to smoke or to do other bad things, you can pray to God,” the dean said. “You also can come to me, and I’ll try to help.”

The dean prayed with him.

Hangbe liked the prayer, and he decided to try praying on his own. He was tired of being controlled by his addiction to tobacco. He also was hungry. He had been spending so much of his food money on tobacco.

The next time that he wanted to smoke, he prayed, “Dear God, please help me to overcome this temptation to smoke.”

He repeated this prayer every time he wanted to smoke.

“Dear God, please help me to overcome this temptation to smoke,” he said.

He prayed in his dormitory room. Sometimes he climbed the stairs to the roof of the boys’ dormitory to pray. Other times he asked the dean to pray for him.

Three months have now passed since Hangbe last used tobacco. He still is tempted every day, and he wishes that he had never started the filthy habit. But he is glad that God is giving him strength moment by moment to resist the temptation to pollute his body and mind.

He wants to warn other children not to smoke even once.

“You might think that you are happy when you smoke,” he said. “But real happiness comes from reading the Bible and praying.”

Part of a Thirteenth Sabbath Offering three years ago helped build the boys’ dormitory where Hangbe lives at the Seventh-day Adventist School in Dimapur, India. The offering also helped construct a girls’ dormitory. Hangbe is thankful for the new dormitory because that is the place where God gave him the power to stop using tobacco.