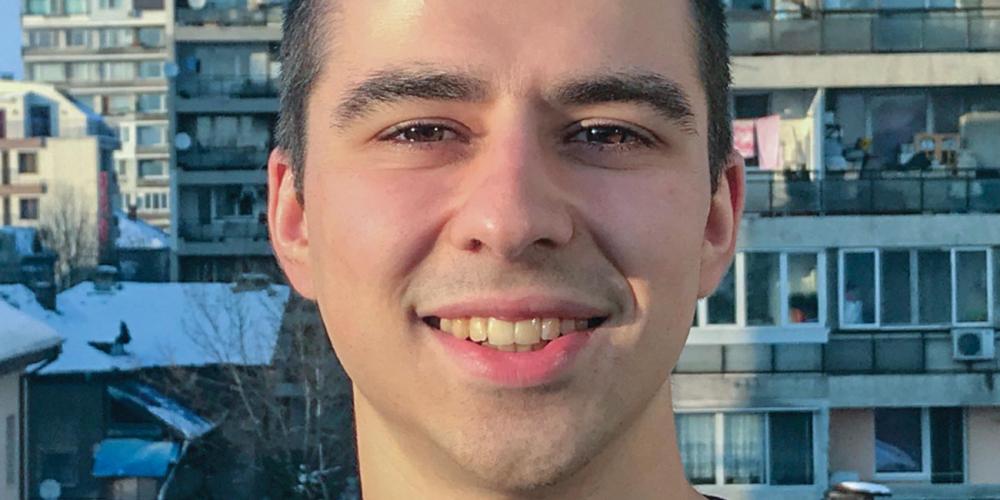 The Rock-hewn Churches of Ivanovo are a group of monolithic churches, chapels, and monasteries hewn out of solid rock. The caves in the region were inhabited by monks from the 13th to the 17th centuries, where they cut cells, churches, and chapels out of solid rock.

To Sabbath School teachers: This story is for Sabbath, Feb. 15.

Two young men started down the hiking trail just as the early morning sun peeked over rugged mountains in Bulgaria.

Their backpacks were loaded with food, water, clothes, and a tent. The young men were three days into a five-day hike of the Balkan Mountains. The previous day, they had reached the highest point, Botev Peak, and now they faced a long 9 ½-hour trek before pitching the tent for the night.

Almost as soon as they started hiking, Boyan Karl Smilov noticed a dog.

“Look at that,” Boyan told his friend, Lyubo. “Maybe he is following us to the place where the trail splits in two.”

The dog was huge. If it stood on its hind legs, it would be taller than Boyan or Lyubo. Dried mud clung to its straggly fur.

Boyan called over the dog, and he and Lyubo patted him. The dog wagged its tail.

It took two hours for Boyan and Lyubo to hike to the place where the trail split in two. Then the trail became very steep, and they struggled to climb up it.

The dog, however, easily climbed ahead of them. When they stopped to catch their breath, the dog also stopped and looked at them, panting, with its long tongue hanging out. It looked like the dog was laughing and saying, “Come on you two-footed creatures. You’re too slow.”

Reaching the top of the next peak two hours later, Boyan and Lyubo decided to give the dog a name. Lyubo, who was good at names, said, “Let’s call him Courage.”

Boyan and Lyubo continued hiking, with Courage leading the way. Cow herders live on the Balkan Mountains, and the hikers passed many herds of cows guarded by big, mean dogs. Sometimes the dogs barked and snarled at the hikers.

At long last, the hikers reached the clearing for the night. Courage disappeared.

As they settled down to sleep, they heard growling.

“Is that a wolf?” Boyan asked.

Then they heard mooing as cows passed by.

“It must be the growling of a cow herder’s dog,” Lyubo said and fell asleep.

Boyan, however, couldn’t sleep. He could hear the animal walking around and growling. His imagination took over, and he imagined the cow herder’s dog fiercely attacking the tent. The growling got closer and closer to the tent. Boyan reached for his small hunting knife.

Then snoring pierced the night air. Boyan heaved a sigh of relief.

Just as he was dozing off, loud barking shattered the night. Courage and a cow herder’s dog were barking angrily at each other. But Boyan wasn’t scared. “That’s why Courage was following us,” he thought. “God sent the dog to protect us.”

He fell asleep. The next morning, Courage disappeared and never returned.

Psalms 91:5 has a new meaning for Boyan. The verse says, “You shall not be afraid of the terror by night.”

Boyan has never forgotten Courage. When he is scared at night, he remembers Courage and tells himself, “God always protects you, even though you may not realize it.”

Part of this quarter’s Thirteenth Sabbath Offering will help construct a new church building for Sophia West Seventh-day Adventist Church in Sofia, Bulgaria. Thank you for planning a gift.

The Rock-hewn Churches of Ivanovo are a group of monolithic churches, chapels, and monasteries hewn out of solid rock. The caves in the region were inhabited by monks from the 13th to the 17th centuries, where they cut cells, churches, and chapels out of solid rock.