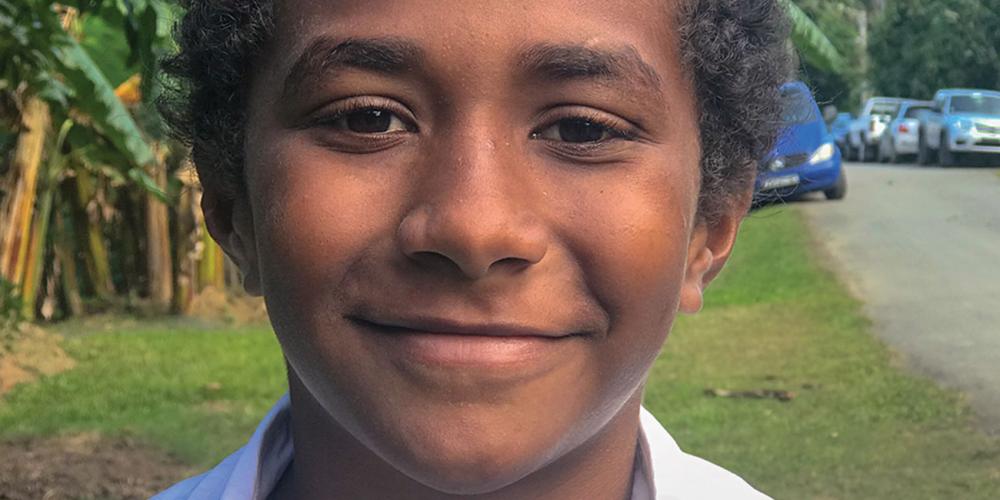 Tears filled Mother’s eyes as she realized that Jesus had answered Albert’s prayer.

To Sabbath School teachers: This story is for Sabbath, July 6.

leven-year-old Albert Andrea was hungry when Mother picked him up at school in Noumea, capital of New Caledonia in the South Pacific.

He had only eaten half his lunch because he didn’t like the other half — spinach.

“Mommy, I really would love to eat a banana,” Albert said. “Can we go to that little market and buy a banana?”

Albert couldn’t forget the banana. As they drove to the market, he spoke about how nice it would be to have a banana.

“Albert,” Mother said, “you need to pray about that banana because you really want to eat one.”

Albert prayed out loud, “Please, Jesus, can I have a banana? Amen.”

Mother was happy to hear the prayer.

“That’s good,” she said. “You’ll see that Jesus will answer your prayer.”

Arriving at the outdoor market, Mother told Albert to wait in the car while she shopped. Albert waited as long as he could, but the car grew terribly hot. He got out to wait. The first thing that he saw was a man selling bananas.

Then someone walked up to Albert. He was a white man wearing white clothing and a white shawl over his head. In his hands, he held a bunch of yellow bananas.

“Albert,” the man said, softly. “Here are some bananas for you.”

Albert was surprised. “How does he know my name?” he wondered. But he accepted the bananas and said out loud, “Thank you!”

Albert returned to the car and peeled a banana. It was nice and ripe and soft.

When Mother came back, she was surprised — and worried — to see Albert eating bananas. “Where did you get those bananas?” she asked.

“From the man in the white hoodie,” Albert said.

Mother and Albert looked, but they couldn’t find the man. Tears filled Mother’s eyes as she realized that Jesus had answered Albert’s prayer. She asked whether Albert had thanked God.

Albert, holding a half-eaten banana in his hand, prayed, “Thank you, Jesus, for my bananas. Amen.”

Albert believes that the man in white was an angel.

“I prayed to Jesus, and Jesus must have told an angel to give me bananas,” he said. “The bananas were really nice!”

Albert catches and sells fish to help his parents. One day, as Albert was fishing, Mother walked by and saw a big fish in the ocean.

Albert prayed, “Can I have that fish?”

He threw out his fishing line and immediately caught the fish.

On another day, Albert told Mother before school that he wanted scoubidou (pronounced: “Scooby-Doo”), colorful plastic strings that children weave into keychains and other handicrafts. Mother, who works as a housekeeper, cleaning someone’s house, said she only had money for bus fare to go to work.

Later that day as Mother was cleaning, the house owner said, “Here is a big basket of scoubidou. Do you want to take it for your son?”

Mother looked at him in shock. “Wow!” she said. “This is an answer to my son’s prayer this morning.”

After school, Albert was thrilled to find the basket of scoubidou at home.