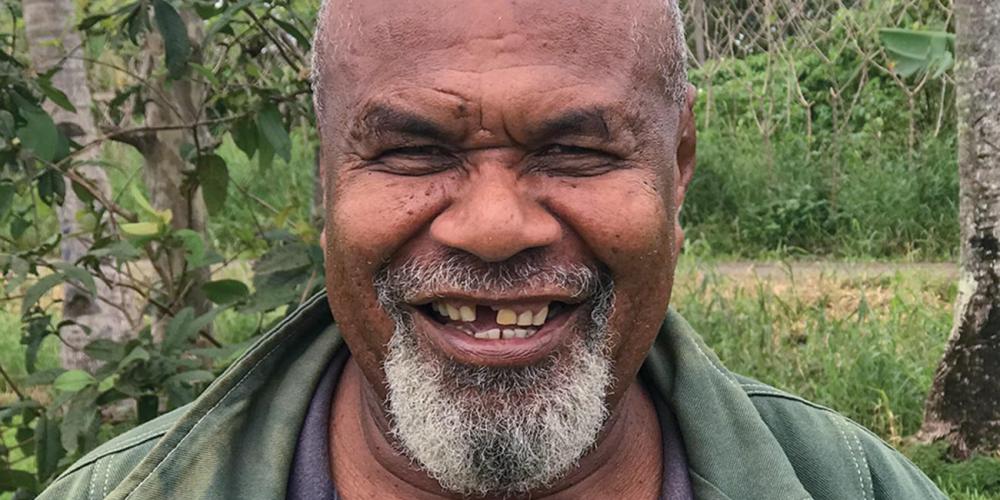 Senitiki fell to the ground. A forklift had run over his leg.

To Sabbath School teachers: This story is for Sabbath, Aug. 10.

enitiki Roqara put on his work clothes on Saturday morning and headed for the door.

His wife, Vasemaca, wearing her Sabbath best, stopped him.

“Where are you going?” she asked.

“To the wharf to load and unload shipping containers as usual,” he said.

Senitiki knew that his wife wanted him to go to church with her and their children. When she was baptized a few years earlier, she had invited him to church every Sabbath. But he didn’t go, and eventually his wife stopped inviting him. Instead she prayed for him.

Senitiki walked out the door on the sunny Saturday morning and headed for the wharf in Fiji’s capital, Suva. It was going to be a long day. He had work from Saturday morning to Sunday morning, loading big cargo containers onto ships and off of ships at the wharf.

The long hours passed, and the workload eased up at 2 a.m. It was dark, and Senitiki sat down on some stairs to rest. He chatted with some coworkers, who also were taking a break, and then stretched out his legs to take a nap. He fell asleep.

Suddenly, a searing pain shot through his body. Senitiki jumped to his feet, and someone shouted, “Oh no! Look at your leg!”

Senitiki looked down. He saw that his pant leg was torn and soaked in blood. He fell to the ground, unable to stand anymore. A forklift had driven too close to the stairs where he had been seated and run over one of his legs.

An ambulance whisked Senitiki off to the hospital, and the doctor said sadly that he couldn’t do anything to save the leg. The leg was amputated that morning.

Someone called Senitiki’s wife, and she rushed to the hospital. As she stood beside his bed, Senitiki looked up at her sadly.

His wife reached out to hold his hand.

“You have to go to church,” she said, softly.

Senitiki remained in the hospital for a month. During that time, his wife and Adventist church members visited regularly. None of his own friends came to see him. The church members shared the love of God and told him that God loved him. Senitiki was amazed that the church members were so kind and decided that God was with them.

He went to church on the first Sabbath after he was released from the hospital. Soon he was baptized. The pastor was happy to see him in church, but he had an idea.

Relatives and neighbors began to attend the Sabbath worship services in his home, and after a while eight people were baptized. The church got so big that it moved out of Senitiki’s house and into its own church building. Senitiki was so happy! Even though he only had one leg, he had planted a church!

Now Senitiki is planning to plant another church in a neighboring village. He is working with several church members to hold evangelistic meetings in the village.

He said that he is thankful God for the terrible work accident that cost him his leg.

“If I hadn’t had the accident, I don’t think that I would have become an Adventist,” he said. “I love this church! I love to take the gospel to the villages.”