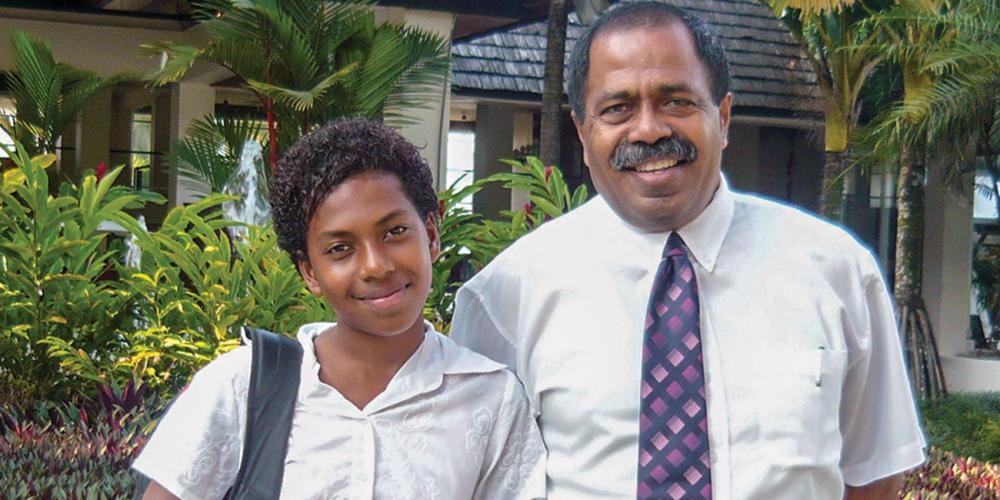 Teacher called the students who had not paid their fees, including Litea’s friend, Ilisavani.

To Sabbath School teachers: This story is for Sabbath, Aug. 3.

Father pulled out several banknotes as 15-year-old Litea ate her breakfast of oatmeal and bread.

“Here,” he said, handing her 80 Fijian dollars, or about U.S.$40. “This is for the school fees that you need to pay for the year. Make sure that you pay your teacher and bring home the receipt.”

The new school year had just begun for Litea in Fiji. Tuition was free at her Seventh-day Adventist school, just as it was at all schools in Fiji. But students needed to make a special payment for field trips and other expenses.

Litea took the money. “I’ll give you the receipt after school,” she promised.

When she arrived at school, she immediately went to Teacher and held out the money. Teacher opened a book.

“No,” he said after a moment. “I don’t need the money. Your fees already have been paid.”

Litea was surprised, and she sat down at her desk. Teacher looked in the book again and began to call out the names of students who had not paid their fees. One of those students was Litea’s friend, Ilisavani.

Litea knew that Ilisavani’s family didn’t have much money. Ilisavani’s father was working in faraway Australia, picking oranges as a seasonal farm laborer. But he wasn’t earning much money to send home to Fiji. Ilisavani’s mother was struggling to feed her and her three brothers and sisters.

“No,” Ilisavani protested. “I can’t take your money.”

Litea pressed the money into her hand. Ilisavani, with tears of gratitude in her eyes, accepted the banknotes and gave them to Teacher. Teacher filled out a receipt.

Father, who worked at the church’s headquarters in Fiji, wasn’t at home when Litea returned from school. He forgot about the money until the family was eating a supper of taro and soup. Litea looked uncomfortable when he asked.

“There was a problem,” she said, hesitantly. “I went to the teacher to pay him the money, and the teacher told me, ‘Your fees have already been paid.’”

At that moment, Father remembered that his workplace had taken the money for the fees from his salary and sent it directly to the school. He had forgotten about that.

“What happened to the money that I gave you?” he asked.

Litea told how she had given the money to her needy friend.

Father and Mother were shocked. Eighty dollars was a lot of money. They exclaimed in unison, “WHAT?!”

Litea squirmed in her seat. She didn’t want her parents to be unhappy.

Then Father and Mother looked at each other and smiled. They realized that Litea was putting into practice a Bible verse that she had learned in Sabbath School. The verse, Matthew 22:39, says, “You shall love your neighbor as yourself.”

“We’re glad that you did that,” he said. “Thank you for looking out for your friend.”

Litea heaved a sigh of relief. “Thank you for understanding,” she said.

The next day, Ilisavani’s mother called Litea’s mother on the phone. She was crying.

“Thank you very much for what your daughter did,” she said. “You know our family situation. Thank you.”

“You can thank Jesus,” Mother said.

Father, whose full name is Save Cavalevu, is glad that Sabbath School taught Litea how to love others, and he hopes that many children will learn the same lesson at his Narere Seventh-day Adventist Church. Thank you for your offerings that helped build children’s Sabbath School classrooms in Fiji.