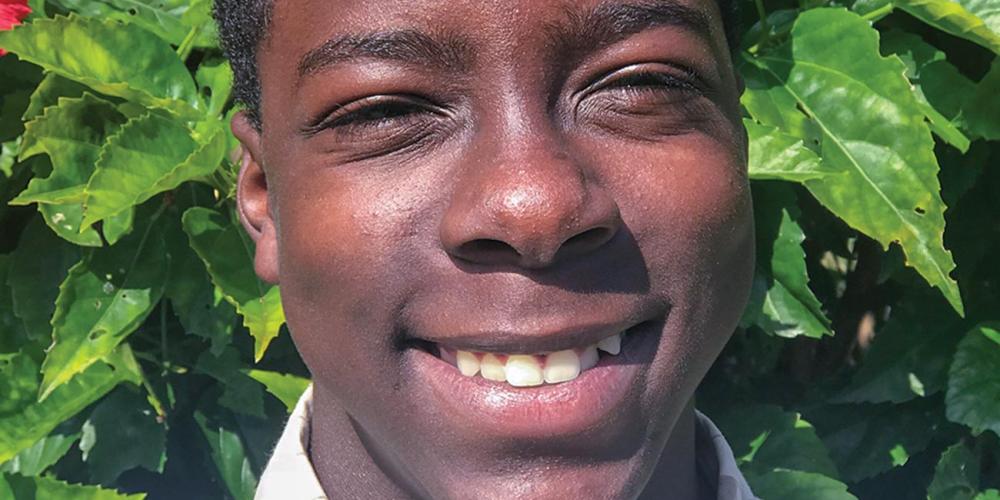 Julius was born dead, but he is determined to preach.

To Sabbath School teachers: This story is for Sabbath, July 27.

Mother woke up 13-year-old Julius Philomin at 4:30 a.m. in their hometown of Mont-Dore in New Caledonia.

Julius got up and went outside to play with the family’s three dogs.

Mother called him back inside.

“Did you forget that you have to go to school?” she said.

Julius felt bad for not listening and put a pot of water on the outdoor fire to boil water for his bath. After bathing, he dressed in his school uniform. Mother reminded him to put on his glasses, to place hearing aids in his ears, and to grab his school bag.

After Mother reminded Julius about breakfast, he poured cream of wheat porridge into a mug and climbed into the car with his 8-year-old brother. He ate the porridge as Mother drove in heavy traffic toward school.

After eating, he took a toothbrush and a bottle of water from his school bag and brushed his teeth. Every time he needed to spit, he motioned with his hand for Mother to stop the car.

Mother and the two boys arrived at school in time for classes at 7 a.m. Mother silently prayed for both sons as she left, but she prayed extra for Julius. At school, the other children were mean to him. He stayed away from them and only played with those who wanted to play with him. Usually he played alone.

Julius is a special gift from God. He was born dead. His heart wasn’t beating when Mother gave birth to him. Doctors somehow started his heart, but he lay in a coma for two and a half weeks. Doctors said his brain was damaged and he would not be a normal child.

But today Julius is normal in every way. He just requires constant reminders. Every morning Mother has to remind him to wake up and get dressed. Every morning, she has to tell him to stop playing with the dogs and, again, to get dressed. She reminds him about his glasses, hearing aids, school bag, and breakfast.

Julius also was selfish. When he packed breakfast, he never thought about helping Little Brother. Mother wanted him to be generous and helpful, and she spoke with him after school.

“If you want to go to heaven, you have to have a heart like Jesus,” Mother said. “Jesus has a sharing heart. If you are going to prepare porridge for yourself, you have to try to put your brother first and prepare for him.”

Mother didn’t raise the matter with Julius again. Instead, she prayed every morning and evening for God to give her son a sharing heart.

Several weeks passed, and Mother was surprised one morning to hear Julius call out to Little Brother.

“Come take a bath,” he said. “I have heated a pot of water for you on the fire.”

When Mother reminded Julius about breakfast, he washed Little Brother’s mug and filled it with porridge. Then he filled his own mug.

Little by little, Julius has changed and become helpful to Little Brother and other people. Recently, he told Mother that he would like to become a preacher. Mother believes God will help him.

“I don’t know how God answered my prayer for my son not to be selfish, but He did,” Mother said. “So, He can also answer my prayer for Julius to work for Him. God works in mysterious ways.”