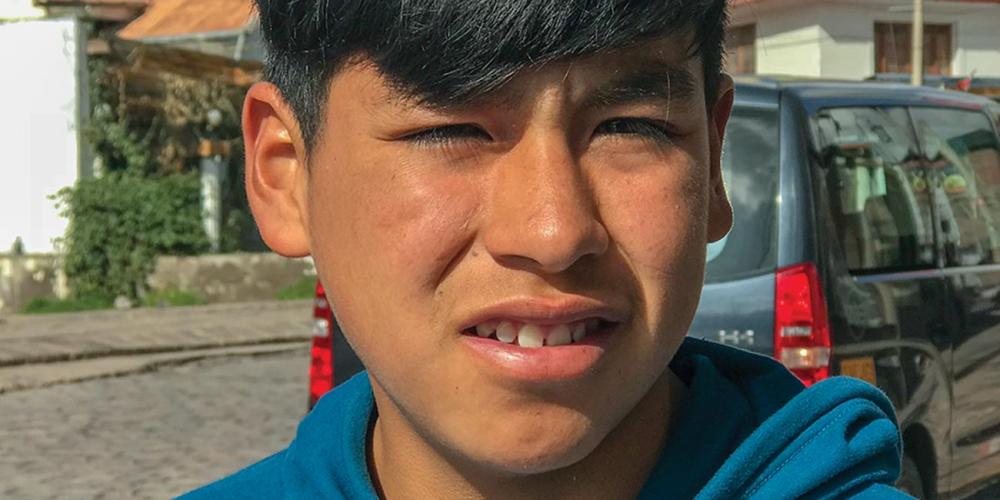 One of the most important Peruvian cultures was the Inca, who lived in Peru about 600 years ago. Their capital, Cusco, is still a major city today. The Inca also built Machu Picchu, a mysterious ancient city in the Andes. They thrived for centuries before being conquered by the Spanish in 1532.

To Sabbath School teachers: This story is for Sabbath, June 15.

Thirteen-year-old Alcides hopped on the crowded bus for the two-hour drive to the city to celebrate Peru’s national holiday in 2016.

His older brother, Wilbur, 45, was driving the bus. All the 21 seats were filled, and three children were standing in the aisle.

After about 30 minutes, Wilbur stopped the bus on the winding, mountainous road. He was feeling sleepy, so he splashed water on his face from a nearby stream.

As the bus continued its journey, Alcides also felt sleepy, and he leaned his head against the window and closed his eyes. He sensed that the bus was picking up speed as it rounded the curves. As the bus hurtled around a curve, it struck a tree and somersaulted down a steep slope.

Alcides can’t remember hearing passengers screaming as the bus fell. He only remembers the bus rolling and his head being slammed against the window and seats. He prayed, “Please, God, help me. Don’t let me die here.”

Suddenly the bus broke in two, and Alcides was flung out. Lying on his back, he saw suitcases, gas canisters, and beer boxes falling out of the sky at him. He rolled back and forth to avoid being hit.

Then he heard the screams of the other passengers. Fear swept over him, but then he realized that people needed help. He walked over to someone with a broken leg.

Suddenly, he remembered that his brother had been driving the bus. He searched for Wilbur and finally found him.

Alcides took off his shirt and wiped his brother’s bleeding forehead. Then he realized that he was the only person who wasn’t injured.

The bus crash occurred near a small village, and the villagers sent a car to help. Someone called Alcides and Wilbur’s mother. She immediately jumped onto a horse and raced to the crash site, arriving in about 30 minutes. When she saw Alcides, she wept with relief.

“You are alive because of God!” she cried. “Thank You, God!”

After staying overnight, Alcides was sent home. The doctor said he was fine. His brother was transferred to a larger hospital in Cusco, and he underwent many operations.

When Alcides went to the house church in his village the next Sabbath, many people who never worshipped on Sabbath came to hear his story. They also wanted to see if he really wasn’t hurt. They were amazed.

“It’s a miracle. You are the only one who is uninjured,” said one.

“You are the son of God because you were spared from death,” said another.

Six people were baptized after they heard Alcides’ tell his miracle story. Another seven people are taking Bible studies in preparation for baptism because of Alcides.

One villager was so astounded that he donated land to build the first Adventist church in the village. He also was baptized.

Mother was so grateful to God for sparing her sons’ lives that she raised the money to construct the church building. The church now has 25 baptized members.

Wilbur has fully recovered, and Alcides, now 15, is praying that he will accept Jesus.

Alcides hopes to work as a mining engineer one day. But he said he will always tell others about how God saved his life.

“I think God spared me to be a testimony to other people,” he said. “I never will stop sharing my love for Jesus and inviting people to Him.”

One of the most important Peruvian cultures was the Inca, who lived in Peru about 600 years ago. Their capital, Cusco, is still a major city today. The Inca also built Machu Picchu, a mysterious ancient city in the Andes. They thrived for centuries before being conquered by the Spanish in 1532.