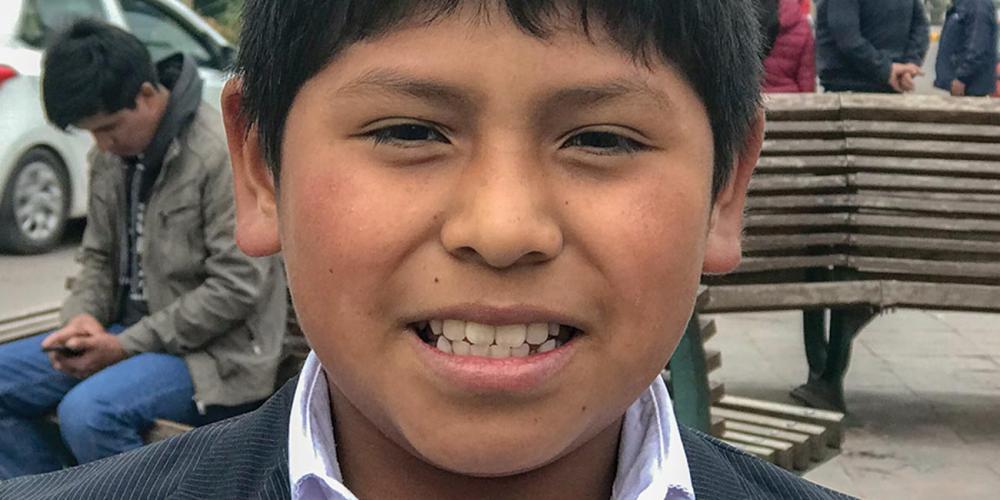 Cesar took the book to Father. On the cover was written “Holy Bible.”

To Sabbath School teachers: This story is for Sabbath, June 8.

Father, who drove a dump truck, stopped to buy beer. When he arrived home, he was drunk, and he wanted to argue with Mother.

Cesar didn’t like to hear his parents arguing every night.

Then everything changed. One day, Father didn’t come home drunk. Instead, he was carried into the house by some friends. His legs were paralyzed, and he couldn’t walk. He couldn’t move his arms and fingers either.

Cesar learned that Father had lost all feeling in his arms and legs while driving the dump truck. Fortunately, someone had called for help. At the hospital, the doctor said something was wrong with Father’s nervous system but didn’t know what to do.

The next day, Father went to another doctor, but he couldn’t help either. Father visited a third and a fourth doctor, and he still couldn’t walk.

Then Father asked Cesar to run out to the family car.

“You’ll find a black book in the glove compartment,” Father said. “Bring it to me.”

Cesar took the book to Father. On the cover was written “Holy Bible.” Cesar had never read the Bible. Father hadn’t either.

Father told Mother that a Seventh-day Adventist co-worker had given him the Bible several years earlier, but he had left it in the car. Now he wanted to read it.

Father read the Bible every day, and he prayed to God. Cesar heard him praying, “Dear God, please give me a second chance. I won’t drink anymore, and I will be a good father.”

As the days passed, Cesar saw that God had heard Father. Feeling slowly returned to Father’s hands and legs, and he began to walk again. Cesar was so excited!

Soon Father returned to work as a driver. But he was different. He no longer came home drunk after work. He didn’t argue with Mother.

One day, Father said to Cesar, “I heard that there will be evangelistic meetings this week at church. Would you like to go with me?”

Mother didn’t want to go, so father and son went every night that week. They loved what they heard about Jesus and His soon coming. On the last night, the preacher asked who wanted to be baptized, and Father went to the front.

The preacher was pleased that Father wanted to give his heart to Jesus, but he said that he needed to take Bible studies first. He also said Father needed to marry Mother.

Cesar decided to pray. After all, God had heard Father’s prayers to walk, so why wouldn’t God hear his prayers for his parents to be married? Cesar prayed every day, “Loving Father, I ask You for my mother and my father to be married.”

Father and Cesar also attended church every Sabbath, but Mother refused to go.

But as the weeks passed, Mother noticed big changes at home. Father always spoke kindly to her, and Cesar always obeyed her promptly. Cesar even came to her and asked how he could help.

After a few months, Mother said, “I want to go to church with you and Cesar. I want to see what is happening at church that has made the hearts of my men so kind.”

Cesar was so happy! Just a few months later, he became even more happy. His parents were married and, after the wedding, baptized.

With no church in their town, Father and Mother opened a church in their home. Neighbors started coming, and soon 20 people were attending every Sabbath. Cesar started a youth program. Even though he is only 10, he leads a group of about eight young people aged 14 to 21 every Sabbath afternoon.

Cesar lives in Andahuallilas, a village located 45 minutes by car from Cusco. Part of this quarter’s Thirteenth Sabbath Offering will help open a Cusco community center where children, many who come from villages like Cesar’s, can learn English and take part in activities that will introduce them to Jesus. Thank you for your mission offering.