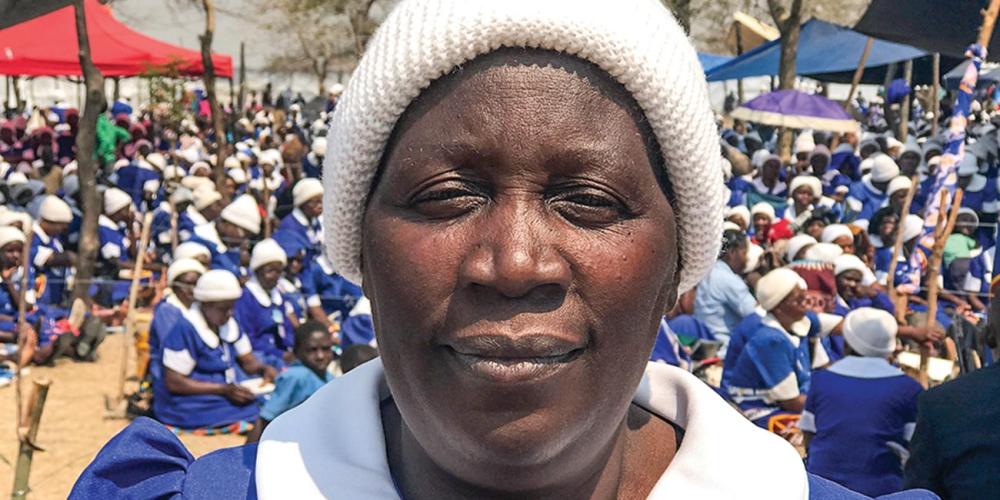 Tough Zambian woman gives up her sword for the Bible.

To Sabbath School teachers: This story is for Sabbath, March 9.

When church members see her selling clothes and dishes at the side of the road, they call out, “Hi, Peter! How are you?”

Strangers turn in astonishment and ask her, “Why are you called Peter when you are a woman?”

She then shares her story. She tells them that her parents named her Christine and she engaged in a different kind of work before meeting Jesus.

Christine used to make kachasu, a homemade beer brewed from sugar and yeast, and sell it in her hometown of Mazabuka in southern Zambia. She also had a second business: giving loans to people and collecting the money with interest.

Christine noticed that some people had trouble repaying loans on time, so she assembled a special outfit that she called her “fighting gear.”

When someone didn’t pay back a loan, she went home and put on a T-shirt and a pair of tight shorts. She firmly fastened a belt around her waist so her pants wouldn’t fall off if she had to fight. She picked up a sharp knife and a menacing-looking machete.

Wearing her fighting gear, Christine marched over to the home of the delinquent debtor and knocked on his door. As soon as the debtor saw her stern face and weapons, he immediately allowed her to enter his house. If he had no money, she took whatever she wanted and kept it until the loan was repaid.

“I never had to fight anyone,” she said. “People were scared of me. When they saw me with the knife and machete, they would allow me to take what I wanted.”

Christine was quite an imposing sight in her fighting gear. People followed her and applauded when she left debtors’ houses with music players, television sets, and motorcycles.

Christine thought she was doing the right thing.

“When I saw people clapping, I thought that that was very good,” she said.

Christine went through the same ritual when people failed to pay her for beer. She went home, put on her fighting gear, and proceeded to their houses.

After collecting her money, Christine returned to her own home, put on her normal dress, and resumed selling beer and offering loans.

This was Christine’s life until a Seventh-day Adventist evangelist came to town. Christine attended the meetings every evening, but suddenly she fell ill. She couldn’t walk, and she stayed in bed for six months. Then she heard that another evangelistic series was being held, and she wanted more than anything to go to request baptism. Unable to walk, she directed her two teenage children to push her to the meetings in a wheelbarrow.

After the meetings and Bible studies, she was baptized.

“The day after my baptism, I could stand on my feet and walk,” Christine said. “I was shocked!”

She had been healed.

Christine feels ashamed when she remembers her old life of giving loans, making beer, and putting on her fighting gear. She has thrown away the knife and the machete and replaced them with the Bible.

“Now my knife and machete are the Bible,” she said. “Verses in the Bible have become instruments to help others.”

“When I came to know God, I asked Him to help me work for Him,” she said. “God helped me to start reading English even though I can’t speak it. Now I’m able to teach and do whatever church work comes my way.”

It was then that church members began to call her Peter. When strangers ask why she is called Peter, she reminds them of the night that Jesus was arrested in the Garden of Gethsemane. John 18:10-11, says, “Then Simon Peter, having a sword, drew it and struck the high priest’s servant, and cut off his right ear. … So Jesus said to Peter, ‘Put your sword into the sheath. Shall I not drink the cup which My Father has given Me?’”

“Just like Peter, I used a sword in the past,” Christine said. “But I have put it aside and now I use the Bible.”