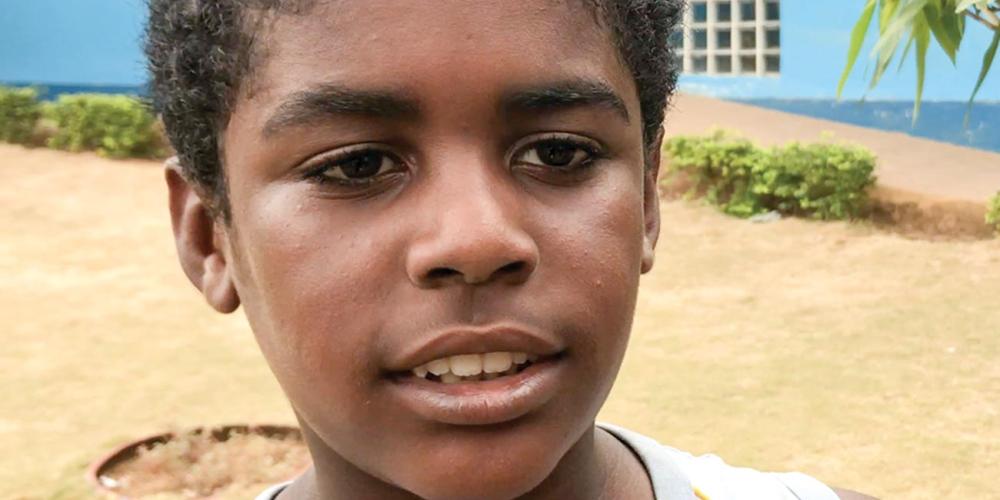 Dadyslau didn't like being called fat, so he threw a rock.

Cacao is the main crop of the island nation and it represents 95 percent of the country’s export. Other export crops include copra, palm kernels and coffee.

The cuisine of São Tomé and Príncipe is based on tropical root crops, plantains, bananas, and fish. The vegetables mainly consist of indigenous greens that are cooked in red palm oil.

To Sabbath School teachers: This story is for Sabbath, Feb. 23.

Dadyslau didn’t like it when the neighborhood children called him names.

Once, he was walking outside his home and a boy cried out, “You’re fat!”

Dadyslau ran over and punched the boy in the West African island of São Tomé and Príncipe.

Another time, a girl looked down her nose and said, “You aren’t handsome.”

Dadyslau raised his arm and slapped her.

One day, Dadyslau had had enough. When a boy called him an unkind name, he picked up a rock and threw it with all his strength. The rock struck the boy on the hand, and the boy ran home crying.

That evening, the boy’s father visited Dadyslau’s home and told his parents about the rock. Dadyslau’s father took a big wooden spoon and struck his son on the hand—hard.

“Don’t throw stones at people,” he said. “If someone is mean to you, just ignore them and don’t worry about it. I’ll spank you again if you throw stones.”

Dadyslau cried and cried. He thought it was unfair that he was being punished when the other boy had spoken so unkindly. But he didn’t throw any more rocks. The next time a boy called him an unkind name, he grew angry and clenched his fists. He really wanted to hit him. But he walked away. He didn’t want Father to bring out the big wooden spoon.

When Dadyslau started third grade, his parents sent him to a Seventh-day Adventist school. He had never heard of Jesus or read the Bible, and he loved hearing and reading Bible stories. He especially loved reading about Jesus.

“I learned how Jesus was crucified and resurrected and went to heaven, and is waiting now to come and get good boys and girls,” said Dadyslau, who has studied at the school for two years. Dadyslau is now nine, and in the fourth grade.

His favorite Bible story is when Jesus told His disciples that He would go to heaven and come back again in John 14:1-3. “Let not your heart be troubled; you believe in God, believe also in Me,” Jesus said. “In My Father’s house are many mansions; if it were not so, I would have told you. I go to prepare a place for you. And if I go and prepare a place for you, I will come again and receive you to Myself; that where I am, there you may be also.”

“I like this story because I want to go to heaven,” Dadyslau said. “I want to see God in heaven and to see heaven.”

Dadyslau’s parents have noticed a change in his behavior, and they are very happy that he is learning about Jesus at school. His six-year-old sister now studies at the school, too.

At school, Dadyslau learned that he doesn’t have to feel angry inside when other children are unkind.

“When someone calls me a bad name now, I ignore them,” he said. “I don’t say anything and just keep walking to where I am going. I don’t care what they say because I know otherwise. I am handsome. I learned in school that God made me, and God only makes wonderful things.”

Part of this quarter’s Thirteenth Sabbath Offering will help Dadyslau’s school—International Adventist College - Cosme Mota—build an auditorium where children can go to morning worship to learn more about God. Thank you for your mission offering.

Cacao is the main crop of the island nation and it represents 95 percent of the country’s export. Other export crops include copra, palm kernels and coffee.

The cuisine of São Tomé and Príncipe is based on tropical root crops, plantains, bananas, and fish. The vegetables mainly consist of indigenous greens that are cooked in red palm oil.