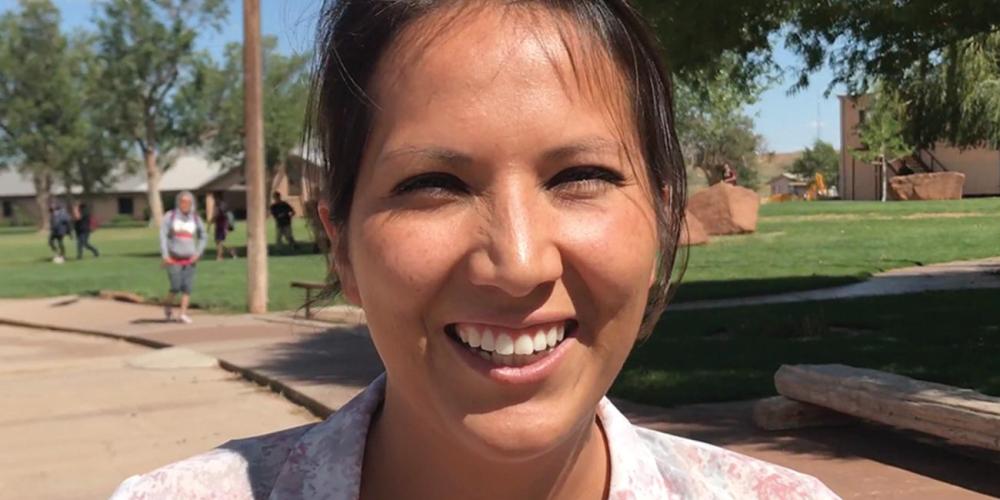 To Sabbath School teachers: This story is for Sabbath, June 23. Click here for photos to share while telling the mission story.

Jovannah [pronounced: JO-vana] promised her mother that she would never become a Christian.

Fifteen-year-old Jovannah lived in the U.S. state of South Dakota, and she made the promise when she asked her mother for permission to move to Holbrook Seventh-day Adventist Indian School in Arizona. [Find South Dakota and Arizona on the map.]

“If you have to go, go,” her mother said. “But know this: That is a Christian school, and they will lie to you to get you to believe the way that they do.”

“I won’t fall for it,” Jovannah said. “I’m just going for the education.”

Jovannah packed her belongings into black garbage bags and loaded them into the back of a pickup truck owned by a friend’s uncle. Then the uncle drove Jovannah and her friend to Holbrook Indian School.

Starting ninth grade at a new school thrilled Jovannah. She hadn’t been a good student in the eighth grade, and now she had a chance for a new start. She decided to be a perfect student at Holbrook.

After three months, she had top marks in all her classes except one—Bible. [Ask the children: Why do you think that is?] Jovannah remembered her promise to her mother not to become a Christian, so she didn’t study for Bible class. As a result, she had a failing grade on her report card. Jovannah didn’t like the bad grade among all those top marks. She wanted to be a perfect student. So, she decided to find a way to improve her grades without becoming a Christian.

“I needed to learn how to fake it without learning it,” she said.

Jovannah joined a Bible study group with other students. She had never read the Bible before, and she loved the stories. Then she joined a second Bible study group. Before she knew it, she wanted to be baptized.

That summer, she went back home for vacation. She was now 16 and wanted to start sun dancing, an important part of her native Oglala Lakota Sioux culture. Part of sun dancing meant that she would not be able to eat or drink anything for four days. During that time, she would pray to the spirits.

She went to the medicine man to ask for permission to start sun dancing. He gave her good news. He said she could not only sun dance but also carry the special Pipe of the People during the dance later that year. It was the biggest honor that a person could have at the Sun Dance.

When she returned to school in the fall, she was baptized. She thought she could serve God and participate in the Sun Dance.

But then Jovannah heard a Sabbath sermon that made her think hard. The preacher said many people thought that they could serve both the God of heaven and another god — such as money, friends, or possessions. Jovannah remembered that she was trying to serve God and serve the spirits in the Sun Dance.

“I thought that the preacher was speaking to me directly,” she said. “I knew that the sermon was for me.”

She called her mother and told her that she couldn’t worship God and the spirits, so she would not Sun Dance.

Mother was furious and refused to talk with her after that. Jovannah was heartbroken, and the next few years were difficult. But she remained faithful to God. She found a new family at the Holbrook school. “I was disowned by my family, but I had a new family here,” she said.

During Jovannah’s senior year, her mother became more accepting of her beliefs. When she graduated, Mother made her new traditional clothing and put crosses on the back of her moccasins.

Jovannah graduated from Holbrook school and went to Union College in Nebraska. After graduating, she returned to Holbrook to work as a teacher and administrator. She helps other students who also are disowned by their families.

“I saw Christ’s goodness and healing at Holbrook,” she said. “God is bigger than my pain and fears—and He has given purpose to my life.”

Part of this quarter’s Thirteen Sabbath Offering will go to Holbrook Indian School so more Native American children came learn about Jesus—and have a Christian family. Thank you for your mission offering.

Jovannah Poor Bear-Adams discussing the struggle between being a Native American and a Christian. (Andrew McChesney / Adventist Mission)