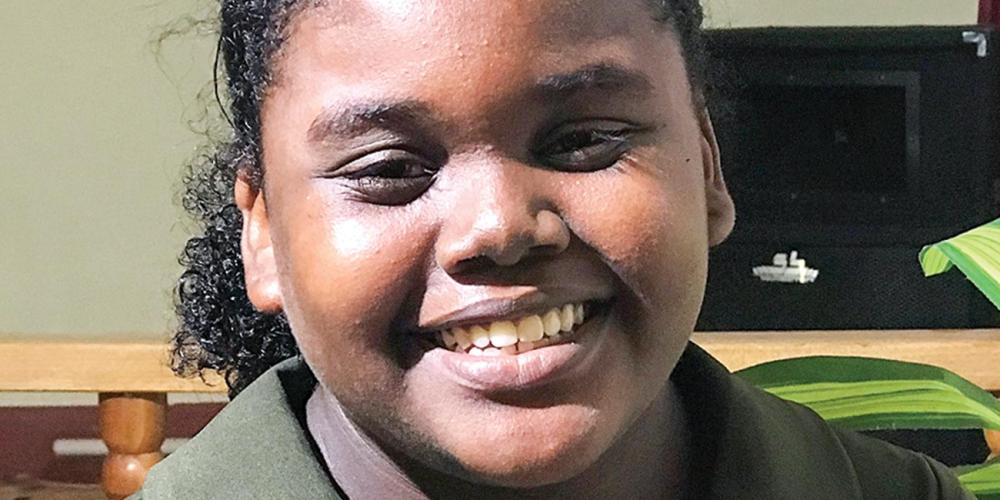 Tenira wondered where Adventists got their beliefs from, and she wanted to go to the evangelistic meetings to learn more.

To Sabbath School teachers: This story is for Sabbath, March 24. Click here for photos to share while telling the mission story.

Tenira [pronounced: ten-ERA] is a girl who lives in Belize. [Find Belize on the map.]

Eleven-year-old Tenira opened the front door of her house . Outside stood two men, and they asked to speak with her mother. When Mother came to the door, the men introduced themselves as Seventh-day Adventists. They prayed with Tenira and Mother and invited them to evangelistic meetings at their church.

After the men left, Tenira asked her mother, “Who are Seventh-day Adventists?”

Mother looked embarrassed. She had been raised an Adventist but no longer was a member of the church.

“But who are Adventists?” Tenira persisted.

“Adventists go to church on Saturday, the seventh day of the week,” Mother said. “They don’t wear jewelry, and they are careful to distinguish between clean and unclean food.”

Those ideas sounded unusual and interesting to Tenira. She had only gone to church a few times—when friends had invited her on Sundays. She and her mother wore jewelry. They had never discussed whether their food was clean or unclean. [Ask children to identify unclean food.] Mother sometimes cooked pork— that’s an unclean pig!

Tenira wondered where Adventists got their beliefs from, and she wanted to go to the evangelistic meetings to learn more.

The preacher said doing good deeds is what makes people beautiful, not wearing jewelry such as earrings and necklaces. He read 1 Timothy 2:9-10, which says, “I also want women to dress modestly … not with … gold or pearls … but with good works.”

The preacher said God’s Sabbath is on Saturday, not Sunday, and he read the Fourth Commandment in Exodus 20:8, which says, “Remember the Sabbath day by keeping it holy.”

After two weeks of meetings, the preacher asked Tenira if she wanted to give her life to Jesus and be baptized. Tenira wanted to follow Jesus, and she was baptized.

Mother respected her decision, and she stopped cooking pork for Tenira to eat.

But after a while, Tenira had some trouble at school with the Sabbath. When she was in eighth grade, she needed to take a special exam to enter high school. The exam was very difficult, and her school offered extra classes to help the eighth graders prepare. But the extra classes were only on Saturdays.

Tenira prayed about the problem and explained to her teacher that she could not attend the extra classes because she went to church on Saturdays. To her joy, the teacher excused her from the classes. Tenira thanked God for answering her prayer. But then she began to worry that she might fail the exam because she hadn’t taken the extra classes. She prayed about that problem, too. God answered her prayer, and she received excellent marks on the exam.

Tenira Smith, 14, explaining why she loves Jesus in an interview at a church in Belize’s capital, Belmopan. (Andrew McChesney / Adventist Mission)

Today, Tenira is 14 years old and the youth leader at her church. As youth leader, she plans special programs for about 30 children every week, and they also do missionary work such as picking up trash on the street and visiting people in the hospital.

“My desire is to continue working for the Lord because I know I have a purpose in His house,” Tenira said.

She is praying that her mother will be baptized, and she is certain that God will answer this prayer soon.

“I have great faith in God because I knew that He cares for His own,” she said.

Let’s pray for Tenira and her mother, and that many people in their country of Belize will hear about Jesus. We can also help share the gospel in Belize by giving to the mission offering.