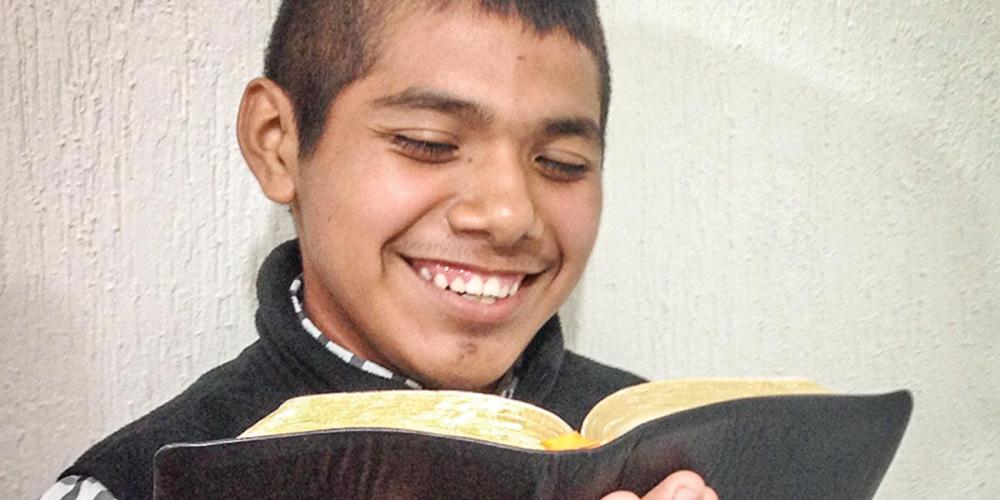 “I want people everywhere to know that nothing is impossible for God,” Uriel said.

To Sabbath School teachers: This story is for Sabbath, March 3. Click here for photos to share while telling the mission story.

When Uriel was six months old, the doctor diagnosed him with hyperthyroidism, a disorder that caused him to feel tired all the time. A few years later, Uriel developed an illness that made his leg muscles hurt dreadfully. Because of this illness, his feet grew in the wrong direction, and he could barely walk. Uriel had to wear special shoes to correct his feet.

If this wasn’t bad enough, the doctor then found a tumor in his brain. But the doctor didn’t want to operate on the tumor because he was worried that Uriel would grow worse.

When Uriel was 11 years old, the doctor told him, “Maybe we can’t do much to help, but let’s at least operate on your legs so you can walk normally. Maybe some of the pain will go away.”

The hospital in Uriel’s town was too small to carry out the operation, so Uriel had to travel two days by car to a bigger hospital in another Mexican state. Mother and Grandmother went with him.

Mother didn’t usually pray, and she didn’t know what to say to God. But she knew that she didn’t want her boy to be in pain any longer, so she prayed an unusual prayer. “Dear God,” she prayed. “If You are going to take my child away from me, just do it. I don’t want him to suffer.”

Then the doctor announced that if he was going to operate on Uriel’s legs, he might as well try to remove the tumor from his brain as well.

The night before the operation, Mother went with Grandmother to church for prayer meeting. Mother told the church members about Uriel, and they prayed for the boy.

The next morning was the day of the big operation. When the doctor checked Uriel’s legs one last time, he couldn’t believe what he saw. Uriel’s legs and feet were in the right position, and he could walk just fine.

The doctor then sent the boy for a brain scan. The tumor was gone.

The doctor started screaming. “This is a miracle!” he said. “This child was terribly sick, but now he doesn’t need surgery. This is truly a miracle because no one other than God could have healed him.”

Everyone in the hospital was shocked. They had never seen anything like this before. The doctor canceled Uriel’s operations.

After returning home, Uriel and his mother wanted to learn more about God, and they started studying the Bible with an Adventist pastor. A year later, both Uriel and Mother were baptized.

Now, Uriel is a 15-year-old high school student who runs and plays soccer.

“I praise God and gave Him thanks because I couldn’t play sports or even walk before this miracle,” he said.

“I want people everywhere to know that nothing is impossible for God,” Uriel said.

Part of this quarter’s Thirteenth Sabbath Offering will help a Seventh-day Adventist hospital near Uriel’s home build a new health center so it can assist many children and parents. Thank you for your mission offering.