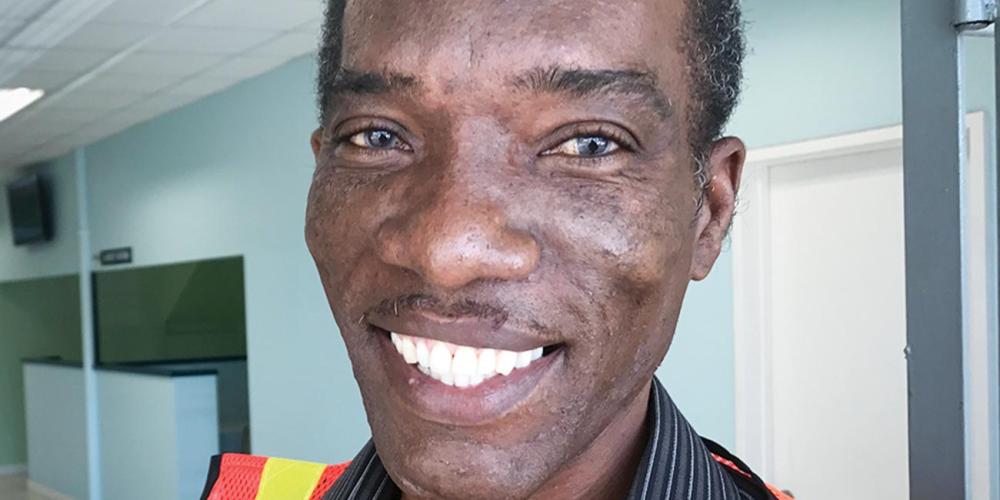 Andrew spent 15 years talking tough and shooting people as he rose through the ranks to become a leader of a gang.

To Sabbath School teachers: This story is for Sabbath, Jan. 27. Click here for photos to share while telling the mission story.

Andrew first fired an automatic weapon at the age of 14, when he joined a street gang in Jamaica’s capital, Kingston. [Find Kingston, Jamaica, on the map.]

He spent the next 15 years talking tough and shooting people as he rose through the ranks to become a leader of a gang.

Then one evening, several friends were chatting on the porch of Andrew’s house, and one of them accidentally fired an automatic weapon into the roof. Nobody was injured, but the incident scared Andrew’s girlfriend, Annette. She pleaded with Andrew to move with her to another town.

Around that time, Andrew’s brother, who was in the same gang, was arrested for murder and received a 20-year sentence.

Andrew decided that it was time to leave the gang and start a new life.

“I gave it all up when my brother went to prison,” Andrew said.

Andrew and his girlfriend moved to another town, and Andrew began to work for the first time in his life. [Ask children: Can you guess his job?] He found a job as a security guard, protecting a business.

Several years passed, and Annette left Andrew to marry a man in the United States. Andrew moved to another town where his sister and several other relatives lived. He found another job. [Ask children: Can you guess his job?] He found another business that needed a security guard.

Andrew’s quiet life was shattered one day when one of his cousins inadvertently blurted out in a conversation with friends that Andrew used to be a gangster.

“Andrew isn’t who he seems to be,” the cousin said. “He used to be a gangster and shoot people.”

The news quickly spread through the town. Everyone was scared, and several people wanted to kill Andrew. Thirteen men took guns and marched over to his house. Andrew looked out the window at them with disdain. He thought he was stronger than all 13 men together.

“They were simple country people, and I had grown up in a tough concrete city,” he said.

He went to get his guns.

Around that time, Andrew’s sister heard about the standoff outside her brother’s house and rushed over. She saw the guns in his house and begged him not to shoot anyone.

“If you shoot them, then I and your other relatives won’t be able to live here anymore,” she said. “It would be best if you left town instead.”

Andrew didn’t want to cause trouble for his family, so he threw some clothes into a backpack and walked out the front door. The armed men watched silently as Andrew walked past.

Andrew had nowhere to go, so he returned to his birthplace, Kingston. Unable to find work, he slept at a bus station for 2 ½ months. The once-powerful gangster was now poor and homeless.

Then one day, another homeless man told him about a place called the Good Samaritan Inn. The man said it was run by the Seventh-day Adventist Church and offered free hot meals, a chance to bathe and do laundry, and a place to sleep.

Andrew couldn’t believe his eyes when went to the Good Samaritan Inn and saw a crowd of 300 people lined up to eat.

“This is the first time that I had seen people fed like that,” he said.

Some nice people invited him to stay at the Good Samaritan Inn, and soon he began working there. [Ask children: Can you guess his job?] Yes, he became a security guard! He also took Bible studies, and he was baptized.

“I want to help as much as I can,” he said. “I’m very happy that I’m alive and happier than I ever dreamed possible. It gives me a lot of joy to be able to give to others.”

Andrew has found a new girlfriend, and they are planning to get married. But the most important person in his life is God.

“I am trying to be very faithful and put my trust and faith in God,” he said.

Part of the Thirteenth Sabbath Offering that children gave three years ago helped repair the Good Samaritan Inn so it could help more homeless people like Andrew. Thank you for your mission offering that helps people in Jamaica and all around the world learn about Jesus.