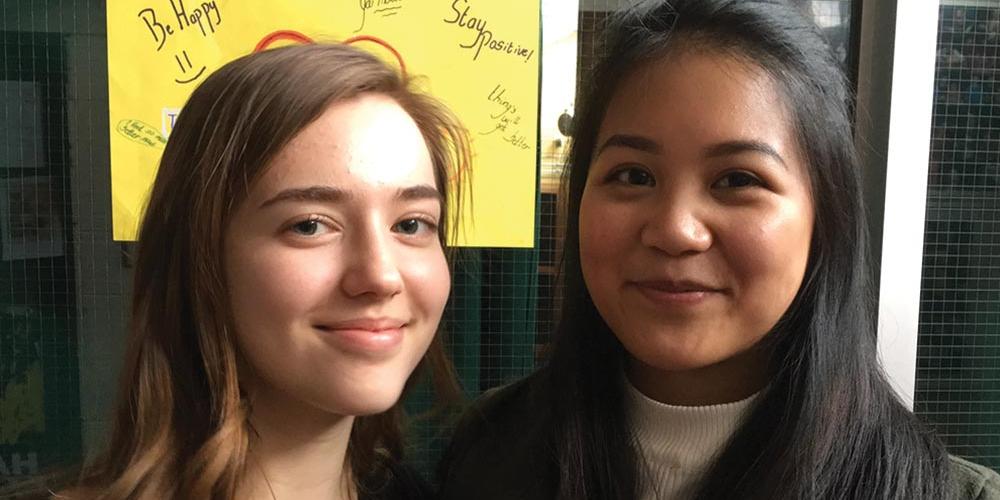 Because there isn’t an Adventist school in Ireland, Iustina and Thea go to a community school, where most of the students don’t believe in God.

Iustina (you-STEEN-a) and Thea are best friends and they like to do everything together. They live in the beautiful country of Ireland, located in the North Atlantic Ocean just west of Great Britain [point out on a map].

Because there isn’t an Adventist school in Ireland, Iustina and Thea go to a community school, where most of the students don’t believe in God.

Sometimes the other children ask the girls interesting questions, such as why they go to church on Saturday.

“I tell them about the Ten Commandments, and how Saturday is the original Sabbath day until people changed it,” says Thea. “One day a classmate and I started talking about it. She told me, ‘I know all about how Saturday used to be the Sabbath day. I’ve read the whole Bible!’”

“But sometimes it’s kind of awkward,” says Iustina. “My close friends understand me, but when I invite them to visit our church, I have to tell them that we meet at a school, and they judge us because it’s not in a regular church building.”

You see, many people in Ireland have found the Seventh-day Adventist Church in Dublin—some have moved there from other countries, like Iustina and Thea. Others have attended meetings to learn more about the Bible, or they’ve visited the health center at the Dublin church and are now coming to the church on Sabbath.

After a while, so many people were coming to the one Adventist Church in Dublin they couldn’t all fit into the building! So groups started meeting in schools, hotels, and other places.

Part of our Thirteenth Sabbath Offering this quarter will go to build another Seventh-day Adventist Church for the people in Dublin, Ireland.

But in the meantime, Iustina, Thea, and other Adventist young people keep telling others about Jesus, and keep inviting them to visit their “church” that meets in a school.

“Sometimes on Sabbath afternoons we go to Stephen’s Green (a beautiful park in Dublin) and give out free hugs!” says Thea. “And we give out pamphlets and magazines, such as Signs of the Times. And sometimes we give out Steps to Christ.

“We wear green shirts that say ‘Free Hugs’ on them,” Iustina says. “People come up to us while we’re just standing there. It’s really fun! One day I gave 127 hugs! All of the literature was gone, so all we could do was hug!

“People ask us why we’re doing this and we tell them we’re from the Seventh-day Adventist Church! After we hug them, the people smile and say, ‘You’ve made my day!’” says Iustina.

More and more people are coming to the Adventist groups meeting in Dublin, Ireland. Let’s help Iustina and Thea and the many other people in Dublin by bringing our Thirteenth Sabbath offering to Sabbath School so they can have a new church. Thank you!