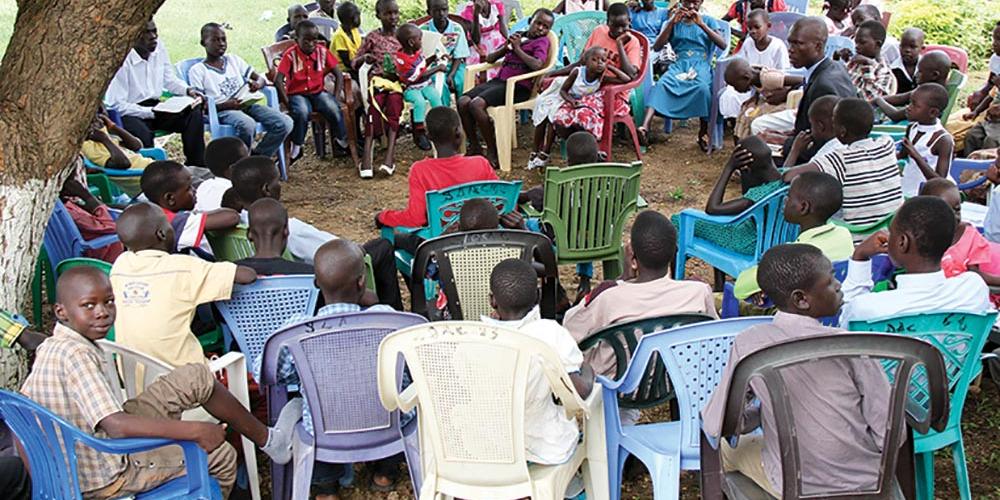 If you won’t be having a special program, use the following stories as the regular mission feature, or invite a guest to speak to the children about one of the featured countries.

Obeying God Rather than Man

Narrator: Today we’ll hear two inspiring stories from East-Central Africa. In the first story, we pay tribute to one of the early Seventh-day Adventist missionaries—Pastor O.U. Giddings. Pastor and Mrs. Giddings served as missionaries in many countries of Africa, including the Democratic Republic of the Congo, which is where this story, written by Pastor Giddings, takes place. It was first published in the Missions Quarterly, Fourth Quarter, 1942.

Reader 1: Mwana-Mbo was a native lad about fourteen or fifteen years of age who lived in a village about one and a half miles from our mission. His name translated into English means “a young buffalo.” “Mwana” means “a young one,” or “baby,” and “mbo” means “buffalo.”

Mwana-mbo entered the mission school and he not only learned to read well, but was a good student. He seemed to have a better sense of spiritual things and of right and wrong than many of the other students. His home in the village was close enough to the mission so that he could live at home while attending school, instead of living in the dormitory on the mission with other boys who came from a greater distance.

One day when he returned home after school, he found his father, who was not a Christian, in their grass hut with some of his friends drinking native beer.

Most of the native beer comes from the juice of a certain palm tree. The tree is tapped near the ground—much in the same way that maple trees are tapped in northern countries—to get the sap. The natives catch the sap in a gourd or earthen pot. Sometimes they add wild honey or some other substance, and as fermentation begins very soon, within two or three days the liquid contains much alcohol, and is, of course, very intoxicating.

When Mwana-mbo entered the hut, his father dipped up a gourd or cup of beer, held it out to his son, and told him to drink it. The boy hesitated, then declined. The father spoke to him again—this time in a sharp command for him to drink. The son tried to explain to his father that it was wrong to drink strong drink. He told him that Jesus would never do it, and that he was now Jesus’ boy.

The father became very angry, and told his son that he would have to drink it or leave his home. Mwana-mbo stepped outside. He went behind the hut, and asked Jesus to help him to be a strong boy for Him. Then he went into the hut again, and said to his father, “You may drive me from home, father, but I cannot drink that beer.” So he was driven from his father’s house.

We saw him coming up the path toward the mission home just at dusk, and as that was very unusual, we went out to see what he wanted.

Naturally, the lad was very sad. He had no place to stay, no food, and as he said, no brothers from his own village on the mission who could share a room or hut with him.

After hearing his experience, we provided a place for him, gave him food and supplied his needs for several months until he could get a garden of his own.

He continued after we left the mission, finishing the mission school and then attending [the Adventist] training school. Now he is one of our regular teacher-evangelists, and is teaching boys and girls of his own tribe the story of Jesus which has meant so much to him.

Narrator: Our next story features another young person who stood up for his faith even when it seemed he was alone. This story comes from Tanzania and was written by Mrs. V. Dunder, who served as a long-time missionary in East Africa. Her story was first published in the Mission Quarterly, First Quarter, 1974.

Reader 2: How fortunate to be the first-born! And that’s what Wambura was. He was born into a Seventh-day Adventist home and had eight younger brothers and sisters.

Wambura struggled through primary school and was chosen to attend our Seventh-day Adventist school. At the end of his secondary schooling he successfully wrote the Cambridge examination and was selected to take nurse’s trianing. How thankful Wambura was to know the Lord was leading him where he could help others.

Just before leaving home to study nursing, Wambura attended an Adventist youth camp. Pastor Hancock was there and taught the young people a chorus that inspired this young man to make Christ first in everything, regardless of the consequences. As he left his father, mother, sisters and brothers, these words rang in his heart:

The Lord is my Shepherd,

I walk with Him alwayas,

He leads me by still waters,

I walk with Him always.

Wambura took the Lord as his Shepherd and walked with Him always. Since there was a large number of young people entering nurse’s training, the class was informed that at the end of the first and second quarters only the best students would be allowed to continue.

Immediately Wambura faced real problems. In this school classes were held on the Sabbath. His entire future was threatened. What could he do? He spoke with the head of the nursing school, but was told that no exception could be made. All students must attend the lectures on Sabbath morning.

Nevertheless, each Sabbath he prayed and went to church. Several times he was called in before his supervisor to explain these absences. Finally this could be tolerated no longer, and Wambura was summoned to speak with the head of the school for the final word of dismissal.

What a sad day! He remembered his poor parents and brothers and sisters. They were depending on him, the first-born, to complete this course so that he could help them out of their deep poverty. His prayer was that the Lord would give him the words he should speak.

For the last time he was asked to attend classes on Sabbath or return home. Even before entering the office, while yet in the doorway, the question came, “Which is more important, your religion or your training?”

It was a big question, but not too big for God. The answer was there: both are very important. Silently Wambura prayed that he would have the courage to make the right decision. After explaining again that Sabbath was God’s holy day, he added that he would rather be dropped from the class than attend lectures on this day. He had made the right choice, and God was there to honor him. He was excused from all Sabbath classes.

He studied hard and made good grades. He prayed much for his family. His parents were proud of their son who had shown them the way to remain faithful even through trials. After a short time a letter arrived telling of the parents’ joy in their renewed faith in God. The grandmother also was baptized. Now the entire family is preparing for the soon return of our Lord and Saviour.

Prayer, faithfulness, and kindness win people to Jesus. Please pray that the Lord will continue to raise up more faithful young people to witness for Him in these last days.

Narrator: Today we have the opportunity to help the young people in East-Central Africea by giving generously to the Thirteenth Sabbath Offering. A portion of today’s Thirteenth Sabbath Offering will be going to build a cafeteria and dormitories for the medical students at the Adventist University of Central Africa in Rwanda. A portion will also be used to build a Lamb Shelter for the children in South Sudan. This Lamb Shelter will provide a place where they can meet for Sabbath School, Adventurers, Pathfinders, and other programs for children. Thank you so much for your generous offering!